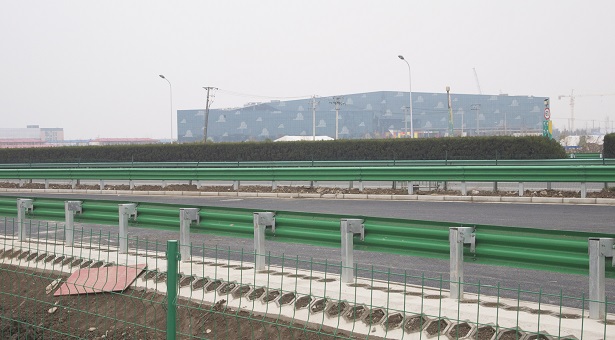 Disneyland Shanghai prepares for its 2016 debut

On a cold, blustering January afternoon, work at the massive Shanghai Disneyland construction site had kicked into high gear. Cranes swung circles in the sky next to a tower of scaffolding where the park’s iconic castle would soon stand taller than any other in the world. But as a front of haze engulfed Shanghai, the site’s features began to blur. Its giant Toy Story-themed hotel, exterior patterned with bright white clouds on a robin’s egg hue, soon dulled to a dingier blue.

Disney might not be able to control the air quality at its first park on the mainland, and on Tuesday its CEO Robert Iger told investors the park’s opening would be delayed to the spring of 2016, according to The Hollywood Reporter. But there is little doubt that it will do everything in its power to ensure that when the park does open, visitors from across China walk out wanting to walk right back in. As the new installment comes into focus, it is clear that the house the mouse built is going for broke. Some unfilled blanks remain concerning ticket pricing and its ultimate launch date, but the company appears to have done its homework this time around after stumbling out of the gate in Hong Kong. Disneyland in Shanghai is perhaps as safe a bet as any theme park can be.

“Obviously in any big project there’s always a level of risk,” said Chris Yoshii, global director in Asia for Aecom Technology. “But the fundamentals of [Shanghai Disneyland] I think in terms of market support is quite strong. The location , the size of the population in the trade area, the number of tourists coming to Shanghai all very strongly support visitations to the park.”

While old Shanghai was home to a number of themed attractions, the mainland was already under Communist Party rule by the time the first Disneyland opened its gates in 1955 and, with them, the era of modern theme parks. The first theme parks in China began popping up in Shenzhen in the mid-80’s, where a first-mover advantage, special economic zone, and official encouragement helped them flourish. But as the concept spread new parks were often plagued with poor planning, design, construction and management, and an industry report from 2009 by Aecom estimated that two thirds of theme parks in China were losing money.

A decade in the making

Back in 2005 as Hong Kong Disneyland prepared to open its doors, Iger told The New York Times that “in order for us to even consider a park [on the mainland], we need to be sure we have access to television.” Without assurances that it could reliably use TV to popularize Disney characters, Iger said, a Shanghai park was out of the question. While broadcast regulations today forbid foreign animation from running during primetime, Disney cartoons are now shown in China, its movies reliably make tens of millions at the box office, and it is opening a park just west of Pudong International Airport.

At 963 acres the new park is much larger than its Hong Kong forbear, and Disney owns only 43% of it, though it gets 70% of the management company running the resort. The rest of those assets belong to a consortium of state-owned companies known as Shanghai Shendi Group. The park also received an enormous cash injection from the Agricultural Bank of China, prompting outcry in Hong Kong, where the government paid more for its park, which only just began turning a profit in 2012, and which views the Shanghai installment as a potential drain on the 45% of its visitors that hail from the mainland. But Aecom’s Yoshii said that Shanghai’s Disneyland was more an example of Disney learning from its mistakes than a customer cannibal waiting to undercut Hong Kong’s park.

“In a way they kind of built half a Disney park when it opened,” he said, pointing to a glaring dearth of attractions that left the Hong Kong park feeling empty. “It kind of got off on the wrong foot in a way, and it’s taken several years now of new attractions and investment to get to a scale that it’s now attractive … I think they learned that lesson, don’t build half a park, build the whole thing. Build big.”

While the Shanghai location appeared relatively barren above ground until about six months ago, it has since become host to a storm of construction as components for landmark features like tower spires and artificial mountains are brought in from off-site for workers to assemble. “In theme parks what people don’t see is underground,” Yoshii said. “There’s a lot of infrastructure, so that’s all been put in obviously, and now the buildings are coming up”

Yoshii suggested that parks like those being planned for second and third-tier cities by Dalian Wanda would not be likely competitors for Disney’s Shanghai park, thanks largely to different target markets. Wanda’s CEO Wang Jianlin has boasted otherwise. At a 2014 event to promote a park scheduled to open in 2016 in Shanghai-adjacent Wuxi, China’s richest man told local newspapers to “compare Wanda head to head with Shanghai Disney in terms of park visitors, and amount of revenue and see who is better.”

Michael Cole, Shanghai-based proprietor of China real estate industry site Mingtiandi, voiced skepticism over Wang’s ambitions to compete in the field of branded experience with a company whose iconic characters rank among the most recognizable in the world. “[Wang] doesn’t have Mickey Mouse out there or Donald Duck… not even Goofy,” he said, noting that Wanda had little in the way of its own IP. “I’m just not sure that every kid wakes up saying ‘mom, mom, take me to the drum park!'”

Cole also suggested that any looming boom in new mainland theme parks seeking to challenge Disney would likely face funding problems that would cut short officials’ grand ambitions to put their cities on the map. “Most of them probably won’t be able to get the cash together, so I’m not sure it’s about resisting the temptation as just not having the horsepower to get it off the ground,” he said.

As for when a park will actually start turning a profit, Yoshii said many parks take seven to ten years before the initial investment pays off. “Theme parks do generate a lot of cash flow and they have a fairly good profit margin, but they also have enormous capital costs, so that’s always a struggle—how do you get your finances sorted out?”

While Disney’s Hong Kong venture may have had a rough first seven years, the Shanghai park seems set to be positively mobbed when it opens, with 25 million visitors expected annually. That may be why the city’s mayor recently announced that the city government had already begun assessing crowd safety plans ahead of the expected rush. With as safe a bet as Disneyland in Shanghai, things could get dangerous. ♦