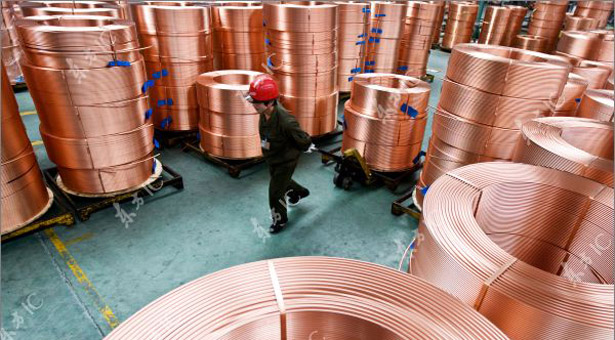 The way most traders and analysts operate borders on divination. Whether a quant finds a statistic that pushes him or her to buy or a chartist spots an unusual pattern spelling the beginning of a down cycle, all traders must fish details out of a sea of conflicting information to determine whether to buy or sell.

Analysts who point their divining rods to the metals market have enjoyed a decade of upward growth. Now, in the face of a slowing and rebalancing China, they are finding their prognostications murkier. Of all the metals, copper – a key component in electric wiring and electronics – is most likely to send analysts’ forked-sticks careening in opposite directions.

Copper prices are closely tied to Chinese demand: China has 6% of world copper reserves but consumes roughly 40% of global supply. The metal delivered investors some of the highest returns of the super-cycle, posting a nearly 10-fold price increase before peaking last year.

But that doesn’t mean copper prices will collapse as China’s economy shifts. Policy watchers say China must transition away from its investment-based growth model, which is delivering diminishing returns, toward a model based on consumption. Many analysts say this will boost purchases of copper, which is widely used in consumer goods like mobile phones, appliances and cars, and keep prices from deflating. However, others say those predictions overlook basic shifts in copper supply and the unsustainable nature of China’s metals consumption.

Patchy reports on copper stockpiles highlight how difficult it can be for analysts to know even basic facts about the market. Analysts must physically make the rounds at Chinese companies to check their inventories and then make a best guess about the size of large national stockpiles.

This has lead to drastically different anecdotal accounts. Media reports and some analysts say that stockpiles of copper are stacked to the ceilings in warehouses and overflowing into parking lots. With such high inventories, firms would likely choose to run down their stocks rather than buying on the open market, meaning prices would be more likely to sink than rise. Yet other advisory firms, including Barclays, have concluded from their checks that stockpiles are not high. They are therefore bullish on copper.

Other analysts say that inventories won’t sway long-term prices much. “The inventories angle is overblown,” said Ian Roper, a metals analyst at CLSA. Instead, structural changes in the Chinese economy will determine prices. Each stage of development in emerging economies corresponds to the use of different metals, Roper said. Early-cycle development necessitates construction, so demand for steel – half of which goes to construction – and iron increases rapidly.

In later-cycle development, rising demand for higher technology products drive demand for metals such as copper – 40% of which is used in consumer goods – and nickel. Another 40% of copper is used in electrical wiring by China’s power industry, which benefits from growing demand for electricity from factories in earlier stages of development and from consumers in later stages.

These trends, as well as the relative scarcity of copper in the earth’s crust compared to iron or aluminum, will continue to support prices through the decade, Roper said. He predicts the price of copper could rise above US$8,800 per metric ton next year from roughly US$8,200 per metric ton as of mid-October.

Bears see plenty of holes in this theory. First, copper supply will increase from roughly 13 million metric tons in 2011 to 21 million tons in 2018, according to a recent note by Morgan Stanley Australia. Second, the price of copper is far higher than its cost of production, indicating the price is determined more by investor sentiment than underlying cost, said Ross Strachan, a commodities economist at research firm Capital Economics. Strachan predicts that a worsening of the euro zone crisis could cause investors to grow risk averse and flee the market, lowering copper prices to US$5,000 per metric ton by the end of 2013.

Longer-term arguments revert to more basic economics. Dambisa Moyo, author of “Winner Take All: China’s Race for Resources and What It Means for Us,” foresees a continuation of the medium-term trends: Long-term global scarcity of copper combined with a desire for consumer goods will keep prices high, she said.

But Peking University finance professor Michael Pettis disagrees, arguing that China’s consumption of metals is far more likely to fall rather than rise. China already consumes a huge amount of metals compared to the  size of its economy; it used roughly 40% of global copper but generated only 11% of global GDP in 2011. Consumption-based economies, the ranks of which China hopes to join, generally use a lower percentage of the world’s supply of metals than their share of world GDP.

Analyst viewpoints diverge widely, but one thing is certain: Metals markets are returning to the pre-super-cycle era of analysis. A rising tide will no longer lift all boats and an individual commodity will trade more on its individual story, said John Mothersole, a senior economist at analysis firm IHS Global Insight.

Having financial diviners agree what that story is, however, will be an entirely different matter.