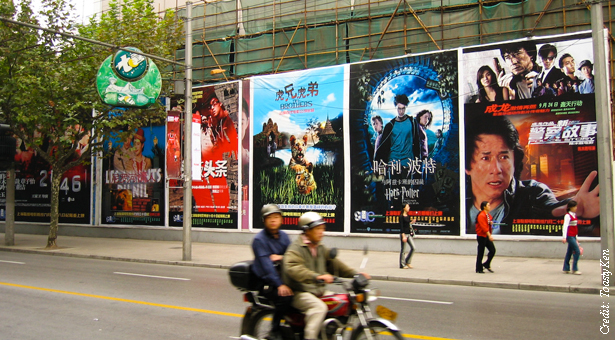 Ying Zhu is professor of media culture at The City University of New York, College of Staten Island. Zhu is the author of several books on Chinese film and media, most recently “Two Billion Eyes: The Story of China Central Television,” published in October.

To its dismay, Hollywood has been put on notice that its high-tech blockbusters are not faring well in China so far this year. The box office sales for such movies are particularly lackluster compared to the spectacular success that US studios garnered last year, with films such as “Mission: Impossible – Ghost Protocol” leading the Chinese box office and receiving large shares of their ticket sales from China.

Meanwhile, to the delight of the Chinese studios, sales for Chinese-language films have risen sharply this year. Speculation abounds as to whether the honeymoon between Hollywood and its Chinese audiences is coming to an end or just to a temporary halt.

To be fair, Chinese policies that are protective of domestic pictures might have played a role in Hollywood’s less-than-par box-office performance. A government circular issued late last year offers a financial incentive, in the form of rebates on screening fees, to Chinese theater chains that receive at least 50% of their annual box-office revenue from Chinese films. Theater owners therefore have a strong incentive to keep a lid on box-office receipts from imported films.

Judging by the chatter on the Chinese internet, mainland audiences legitimately appear to have discovered anew the likability of domestic pictures, at least during the first quarter of 2013, and they are willing to give these pictures a try. Feng Xiaogang, by far the most successful Chinese director of popular domestic films, predicts that the Chinese audience may yet prove to be the savior of Chinese directors.

The reversal of fortune between US and Chinese studio films is not without precedent. To combat declining cinema attendance, regulators reintroduced Hollywood to China in 1995 with an annual quota of 10 big pictures. This instantly restored Chinese audiences’ movie-going habits and led audiences to discover the country’s own big-budget and high-tech entertainment pictures, what the Chinese called “domestic big-pictures.”

The domestic big pics all became blockbusters in 1995, and the film industry in China experienced a sharp rebound, with total box-office returns 15% higher than in 1994.  The industry dubbed 1995 “the year of cinema.”

Among big spending productions, historic epics dominated other genres. Films about contemporary life did manage to persist in Feng Xiaogang’s popular Chinese New Year comedies from the 1990s to the mid-2000s, until Feng too caught the big-pic fever and made a turn to directing big budget historical epics.

Fast forward to 2013, Chinese cinema’s current favor owes much to the strong performance of films that don’t qualify as big pics. Rather, a number of modestly budgeted small pics with local flavor have genuinely connected with the Chinese audiences.

Popular domestic films such as “Lost in Thailand” and “Finding Mr. Right” succeeded by spotlighting contemporary Chinese life, something that is often missing in the fantasy- and explosion-filled Hollywood action genre and the overbearing historical sweep of Chinese epics. As the director of “Lost in Thailand” puts it, “There is hunger from the audience for movies that talk about the real-life situation in China.”

There are some lessons to be drawn from the last resurgence of Chinese film in the mid-1990s, as that rebound of Chinese cinema did not last. The popularity of Hollywood entertainment films led to a slew of crude imitations saturated with gratuitous sex and violence. The proliferation of cheap knockoffs did not sit well with either the censor or the audience. Revenue from domestic pictures soon fell, along with the number of domestic films produced. Chinese cinema entered a downturn in 1996, leading to serious concern about how viable the domestic film market would be without big imports.

The recent blockbuster success of “Lost in Thailand” has spurred the same wave of copycats. The oversaturation of quick, if not cheap knockoffs might again prove fatal to the desirability of domestic pictures if Chinese studios are not careful.

Growing up with the audience

Make no mistake that there is a noticeable fatigue among Chinese moviegoers who I have spoken with regarding the formulaic Hollywood action flicks and an appetite for other options. One can only stomach so many explosions, superheroes and supernaturals.

Once the novelty wears off, the attraction of sequels becomes less appealing, particularly when Hollywood films are no longer forbidden fruits. The ubiquity of Hollywood makes it less exotic, or desirable.

What we are witnessing is the maturation of a generation of Chinese cinephiles coming of age in the company of (pirated) Hollywood films. They have outgrown their adolescent infatuation with action films and now yearn for more sophisticated films with nuance and subtlety. They are ready to leave the action-nest. It does not mean that they will not time and again return to their childhood comfort zone. It does mean that they are venturing out to explore films of diverse style and scale.

Hollywood has yet to catch up with the evolving appetite of its Chinese audiences. Its formula for China hits has yet to be recalculated. The US film industry produces more than the big-budget and high-tech action adventures. It also produces A-class quality films that elicit real emotions and provoke real thinking.

But these adult films are not considered viable exports. As the cliché has it, the dimwitted global audiences are not capable of fathoming spoken words and savoring subtle verbal cues and that action and explosion are the only viable transcultural cinematic weapons. In a nutshell, Hollywood has confined its China pictures to the pantheon of action-adventure, much as China’s US pictures have managed to relegate themselves to the martial-arts ghetto.

This hesitancy may be to the benefit of domestic movie directors. Cinematic poaching at the global scale is no longer a one-way street. Hollywood has succeeded in repackaging Asian cinema with “The Departed,” Martin Scorsese’s remake of Hong Kong’s “Infernal Affairs,” winning an Academy award. Meanwhile, a new generation of Chinese directors is learning to adapt Hollywood’s small picture style of solid story and human characters into successful films. “Lost in Thailand,” for example, is heavily influenced by “Midnight Run,” the genre twisting 1980s comedy-thril
ler starring Robert De Niro.

As the whisper in the classic “Field of Dreams” has it, “If you build it, they will come.” The domestic film market has been built; now Chinese directors have only to conquer it anew – this time with contemporary culture instead of flashy special effects.