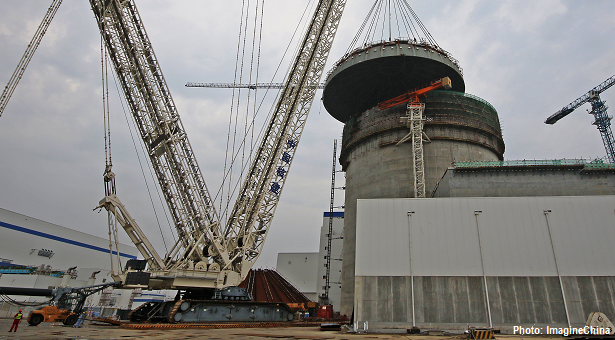 Before he became China’s premier, Li Keqiang was the Communist Party Secretary of Liaoning, an industrial province in the country’s Northeast. It was during this time that Li met with then US ambassador to China Clark Randt and privately remarked that China’s economic growth figures were “man-made.” In lieu of provincial gross domestic product, Li said he preferred another set of data that included freight shipping, electricity consumption, and loans.

With Wikileaks’ release of classified US diplomatic cables in 2010, Li and Randt’s private conversation unexpectedly went public, and the Keqiang Index was born. While analysts have pointed out that the Keqiang Index only correlates to the performance of heavy industry, the figure still serves to remind economists that there is more to an economy than just gross domestic product and unemployment data.

Tracking a country’s electricity use can offer insight into industrial output, energy efficiency and the effectiveness of energy policies. For decades, China has been pursuing energy efficiency and demand side management policies to reduce the country’s dependence on foreign energy imports and increase its economic competitiveness; but many of these efforts are only now becoming apparent due to large-scale structural changes to the Chinese economy.

“For years, China had implemented successful policies to improve the efficiency of heavy industrial facilities, such as cement, steel, and aluminum plants, but rapid expansion of this heavy industrial capacity throughout the country was overshadowing gains in efficiency, meaning continued growth in overall energy consumption in these sectors,” said Max Dupuy, Senior Associate at the Regulatory Assistant Project, an organization that provides technical assistance and international expertise on energy efficiency and environmental policy.

Now, a slowdown in absolute economic growth is revealing impressive aggregate gains, as demonstrated by China’s electricity consumption figures for the first quarter of 2015: Overall electricity consumption grew only 0.8% year on year to 1.29 trillion kilowatt hours according to the National Bureau of Statistics. This represents a 4.6% drop from the same period the previous year. Part of the reason for such tepid growth was a drop in power consumption by the manufacturing industry, which fell by 0.7% in the first quarter. This reflects lower investment and industrial output as well as efforts by the central government to gradually transition the country away from high-polluting heavy industry. Growth in the service sector (7%) and residential electricity use (2.6%) offset this decline.

As a whole, these figures suggest two key trends: The central government’s energy efficiency plans are proceeding as planned, and China’s economy has begun its slow, painful transition away from industry.

Since 1980, the central government has been working to improve energy efficiency – the energy required per unit of GDP – in the two sectors most responsible for China’s pressing environmental problems, heavy industry and manufacturing. A 2014 World Bank report shows they succeeded: From 1980 to 2010, China’s economy grew 18-fold while overall energy consumption only grew five-fold.

As China’s economy continued to grow at double digit rates throughout the first decade of the 21st century, its use of primary energy sources and electricity also increased. To combat growing energy use and import dependency, the central government had to set ambitious goals. China’s 11th five year plan (FYP), a policy outline covering the years 2005 to 2010, called for improving energy efficiency by 20% by 2010, and the 12th five year plan, which runs until 2016, set a benchmark of 16% improvement.

Enforcement of these ambitious goals through policy fell to various government agencies. The Top-10,000 Program, launched in 2011, was one policy that targeted the country’s largest industrial enterprises–industry still consumes around 70% of China’s total electricity, more than in modern developed economies. The program, which began as the Top-1,000 Program, has since brought together 15,000 industrial enterprises throughout the country with the goal of saving the equivalent of 10,000 tons of coal.

By instituting an oversight system that monitored enterprises’ energy use and provided energy management systems, the program has encouraged substantial electricity savings throughout many of China’s most polluting industries. The savings achieved under the Top-10,000 Program will account for over 1/3 of China’s current energy target.

Further gains have been made in building energy efficiency. In its 2015 international scorecard, the American Council for an Energy Efficient Economy ranked China first in building energy efficiency (pdf). The group found that “residential buildings consume less energy per square foot than those in any other country analyzed, and commercial buildings have the second lowest energy consumption per square foot.”

Those improvements are vital because China has been constructing more than one third of all the buildings in the world in recent years and, between 2011 and 2013, used more concrete than the United States did in the entire 20th century. Ensuring that these buildings meet high energy efficiency standards and retrofitting older buildings in China’s growing urban centers are key to the country maintaining its energy-saving momentum.

Other less obvious gains have been made by transforming the way China’s electricity grid operates. In March, China’s top governing bodies released Deepening Reform of the Power Sector, a policy document that provides a number of broad guideposts for reforming the country’s power grid that will be instrumental in changing the incentives governing China’s electricity distribution. One of its key provision calls for expanding the Shenzhen pilot program – which shifts China’s utility companies business model away from profit-oriented electricity selling – to cover the rest of the country.

“The new regulatory regime for grid companies that is gradually being implemented across the country is important because it improves transparency and changes how China’s grid companies make money,” Dupuy said. Changing the incentives for firms like China’s State Grid Corporation – the largest utility company in the world and the 7th largest company on the Fortune Global 500 list­ – will affect everything from simple energy efficiency to priority dispatch order, which forces grid companies to use electricity produced
by renewable sources before using coal and gas generated power. Accordingly, Dupuy said, grid companies should find it more attractive to support end-use energy efficiency and distributed renewables. As a whole, these reforms will facilitate the incorporation of renewable energy sources into the country’s electricity grid and reduce China’s carbon emissions.

China’s slow shift away from industrial production and the shuttering of inefficient plants throughout the country are finally allowing significant gains in energy efficiency to shine through. For economists, shifting patterns in electricity consumption can reveal subtle changes to the Chinese economy that GDP figures fail to capture. Falling industrial demand coupled with growing residential and service sector usage highlight the gradual adjustment that is taking place within the Chinese economy and emphasize the success of the central government’s efforts to improve energy efficiency.

While the Keqiang Index will never be an accurate measure of the strength of China’s economy, its trajectory can at least remind analysts of the complexity of China’s goals as it balances a delicate economic transition with efforts to clean up the environment. Reining in electricity consumption and improving energy efficiency will continue to be two key fronts for China’s central government as it wages the “war on pollution” led by Premier Li himself.  Based on a new study that credits air pollution with contributing to 1.6 million deaths annually in China, the need for progress on both has never been greater. ♦