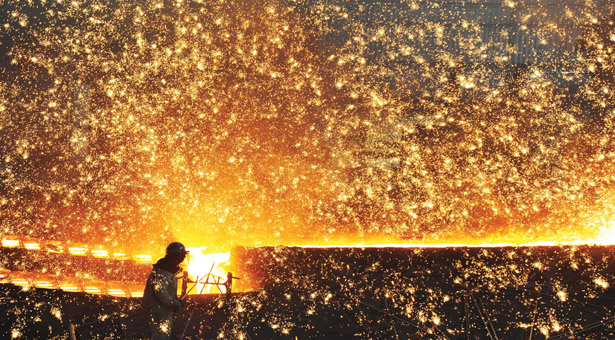 It was Friday the 13th, and stock images of Chinese construction workers and manufacturers suddenly took over web pages around the globe. The photos accompanied the headline news that China’s GDP had slowed to 7.6% in the second quarter, the slowest pace in three years.

The uncertainty this news provoked – that China may be losing its potency as an engine for the sluggish global economy – was compounded by fears that local authorities had “smoothed” (read: distorted) the data. With growth still an important component of officials’ promotions, “adding water,” as the Chinese call it, has a long history in China.

Provincial GDP data is widely recognized as water-logged: In the past five years, the combined figure for the GDP reported by provinces has exceeded the nationwide figure calculated by the National Bureau of Statistics by 5-10%. But now power data, a more reliable economic indicator, was also under question. Just weeks before, The New York Times had reported that local officials were coercing power plant managers into underreporting the slowdown in power consumption.

While some smoothing probably is occurring, all this scrutiny of statistics has overlooked an important factor: China’s data is likely subject to far bigger distortions. As Peking University professor Michael Pettis has long argued, because a significant portion of China’s wealth has gone into under-performing investments, GDP is very likely overstated – by up to 20%, by some estimates.

Fixed-asset investment (FAI) now accounts for around half of China’s GDP. If even a small proportion of current investments turn out to be unprofitable, GDP figures will be revised downward in the future. The process is akin to a bank pushing off default losses in order to record higher profits today, only to see its debts balloon later.

Unprofitable investments are by no means confined to China. From the LA subway to the rebuilding of Iraq, the pre-construction estimates of a project’s costs and benefits often differ wildly from actual post-construction cost and benefits.

Yet bad investment appears to be occurring on an unprecedented scale in China. FAI has accounted for more than 40% of GDP for nine continuous years – a level of investment never before seen in any other country, said Nick Lardy of the Peterson Institute for International Economics. Nearly two-thirds of China’s capital stock has sprung into existence since 2003.

The threat is clear to anyone on the ground. China has far too many examples of profligate corporate spending, from an Austrian village constructed by the real estate arm of state-owned company China Minmetals in southern China to the gilded Versailles-like halls of Harbin Pharmaceuticals’ headquarters.

This issue of China Economic Review includes several other cautionary tales: Our cover story (pg 30) examines the inefficient use of capital among state-owned enterprises, including Citic Pacific’s massive iron mine in Western Australia. Our review of James Fallows’ new book, “China Airborne,” (page 26) also provides an example of how local actors persuade officials to undertake bad investments in the name of growth. The threat of projects such as these, of course, is that while they are recorded as growth today, their losses will result in lower GDP later, as the cost of servicing huge debts dissuades banks, companies or the government from further investment.

This is the reason for Japan’s “lost decade.” Japan’s blistering growth in the 1980s was fueled by the corporate sector taking on an unsustainable level of debt from the banks. When this asset bubble burst in the early 1990s, the government took over much of the debt. Twenty years later, Japan has a lower nominal GDP than it did in 1992, and its gross public debt is 200% of GDP.

There’s another reason that China’s growth may be overstated: the dramatic toll that economic activity has taken on the environment. As Michael Pettis writes, “… it is worth remembering that if an individual earns US$100, but in so doing destroys US$100 worth of his own assets, then a strict accounting would say that he earned nothing.”

A new report unveiled by the United Nations at the Rio+20 summit in late June illustrates this principle. Under the UN’s new “Inclusive Wealth” index, which factors in the cost of externalities such as pollution and environmental resources, China’s economy has been growing at 3% annually, rather than a blistering 10%, and still trails Japan as the third largest in the world, roughly on par with Germany.

Economists have long counseled Beijing to rebalance its economy away from investment and toward consumption, focusing on the quality rather than quantity of investment. Some argue that government officials appear to recognize this need: When Premier Wen Jiabao called for greater investment to stabilize growth in early July, he emphasized the quality and cost-effectiveness of investment.

Yet Wen was still calling for more investment. As the economy slows, the government appears to be losing motivation to rebalance. China’s central bank has carried out two interest rate cuts within one month, and new bank loans jumped 16% in June. The value of the yuan against the dollar has also weakened in recent weeks, helping to support export businesses but punishing consumers.

This is cause for alarm. China must make room for slower, better-quality growth and investment. Of course, there are painful consequences to slowing growth. Local governments are struggling to make ends meet, and property developers are exhausting methods to evade bankruptcy. Yet by propping up growth with excess investment, Beijing will only invite a more painful reckoning.

Some non-performing investments are clearly the result of honest mistakes and the inherent uncertainties of prediction. But many more are due to a system that places undue emphasis on local officials’ ability to generate GDP. Until this incentive structure changes, observers should be aware that some of China’s economic bulk may just be excess water weight.