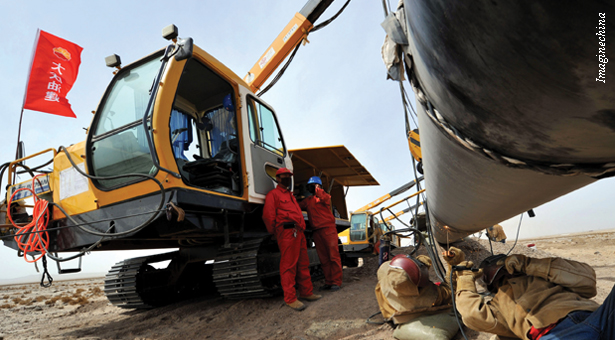 Telvent Canada, a company that monitors more than half of North America’s oil and gas pipelines, discovered last September that hackers had breached its firewall and security systems. The attack conceivably gave a foreign entity the ability to shut down the US energy system and throw the economy into chaos. Security firms traced the attack to an espionage group with alleged links to the Chinese military, allegations that Beijing quickly disputed as “groundless both in facts and legal basis.”

But the group’s aim, according to Critical Intelligence, an Idaho-based security company, may not have been to gain a chokehold over the US economy. Instead, the group may have been looking for blueprints for the hydraulic fracturing technology used to extract shale gas. Several attacks in the last few years against North American energy firms, as well as industries that rely on natural gas like petrochemicals and steelmaking, seemed directed at “fracking” technology, Critical Intelligence said.

The technology has proved extremely lucrative for the US, and China – with its large untapped shale gas reserves – hopes to follow suit. Fracking involves shooting a slurry of water, sand and chemicals into a well drilled in a shale rock bed at a pressure of up to 8,000 pounds per square inch. That shatters the rock surrounding the horizontal well, releasing tiny bubbles of gas that are locked in the rock.

Since energy companies in the US began using the technology to extract gas from shale in 1998, massive reserves of previously unavailable energy have been released. “Unconventional energy” sources like shale gas have set the US on a track to become nearly energy self-sufficient by 2035.

China, meanwhile, is marching in the other direction, meeting much of its rapidly expanding demand for energy with imports. According to a February 28 research note by Citi, China surpassed the US as the largest global importer of oil at the turn of the year. China’s dependence on foreign oil, the vast majority of which is shipped through the narrow Strait of Malacca and the contested South China Sea, is a significant security risk – especially for a country that remains reluctant to step outside of its traditional non-interventionist policy and take a more active role in international affairs.

These changing dynamics are raising the stakes for China to develop its own domestic source of energy. The country does have promising potential sources: According to estimates from the US Energy Information Administration, China has at least 26 trillion cubic meters of recoverable shale gas, more than any other country in the world, including the shale-gas-rich US. And this energy source could be tapped while producing only half the carbon emissions of coal, currently the source of more than 70% of China’s energy and much of its infamous smog.

The Chinese government has set ambitious targets for replicating the US shale gas boom. China is clearly looking at the US experience and using America’s exponential growth in shale gas production as an analogue, said David Hewitt, managing director of equity research at Credit Suisse and an expert on the gas industry. The country aims to produce 6.5 billion cubic meters of shale gas annually by 2015, a target that rises dramatically to 100 billion cubic meters by 2020.

However, few observers are convinced the country can hit those targets. “We really just haven’t done enough exploratory work to have confidence that we understand the differing geological challenges in China versus the US or North America,” Hewitt said.

The Chinese shale gas industry faces daunting challenges both above and below ground. The government has held two auctions of shale blocks – distributing four blocks to six state-owned companies in 2011 and 20 blocks to dozens of state and private companies in 2012 – in an effort to let private companies energize the virtually nonexistent industry. But the land ministry has not offered companies much seismic information about the blocks, and the value of these holdings is questionable.

Without adequate incentives, the latest auction attracted what appeared to be a random pool of gamblers, including a real estate developer and a tobacco dealer. None of the 16 firms that won the exploration rights in the last round had drilled for shale before. “While China remains too dependent on PetroChina and Sinopec for the development of its shale industry, opening up acreage to provincial governments and companies with no experience in oil and gas (coal, power) can hardly be seen as a positive,” sell-side research firm Sanford C. Bernstein wrote in a recent note.

Below the ground, Chinese shale gas has proven technically difficult to extract. The country’s shale deposits are more scattered than those in the US and caught in softer rock that is harder to fracture – what industry insiders term low porosity and low permeability. Many deposits are also farther underground. In Sichuan Basin, the first site of major development for the Chinese shale gas industry, shale reserves are twice as deep as the typical North American deposit (not to mention located in treacherous mountain terrain).

These challenges make Chinese wells both trickier and more expensive to drill. According to a report by Norton Rose, a law firm, the cost to drill a shale gas well in China ranges from US$5-12 million – many times the US$2.7-3.7 million price tag in the US. Industry sources say China is drilling only a few new wells a month, while hitting the 2020 targets will require tens of thousands. Only about half of these new wells are producing enough gas to be marketable, compared to a “success rate” of more than 80% in the US.

In addition, many of China’s shale deposits are in the west, far from population centers, and the country still lacks the infrastructure to get the gas to market. Though China is hurriedly erecting cross-country gas pipelines, it still only has about 10% of the length of gas pipeline in the US. Many of the gas wells are additionally located in areas with little fresh water, a huge impediment to the water-intensive fracking process.

Given the difficult-to-extract nature of China’s shale gas deposits, lack of technology and expertise remains a major impediment for developers. Chinese companies are capable of horizontal drilling and multistage fracking, the two major technologies that shale gas development requires. But their success rate for these technologies still lags behind their counterparts abroad.

Chinese companies have been busy forming partnerships with foreign companies in an effort to improve their abilities. Yet contracts can be difficult to negotiate, and some analysts say foreign companies are increasingly wary of theft of their intellectual property.

Still, foreign firms that provide services to the oil and gas industry, such as Schlumberger, Halliburton and Weatherford, have signed deals with Chinese counterparts that likely involve some transfer of technology. Some of the world’s major oil and gas producers are also helping Chinese partners with their exploratory efforts. Royal Dutch Shell formed a shale gas joint venture with China National Petroleum Corporation in the Sichuan Basin, and Chevron is exploring for shale gas with an as-yet-unidentified Chinese partner. Chinese oil majors are also snapping up shale gas companies in North America to absorb their technology and experience, such as CNOOC’s acquisition of Nexen last year.

But the development of the Chinese shale gas industry isn’t merely a question of catching up to foreign expertise. With their difficult-to-frack wells in parched, mountainous terrain, Chinese companies face different challenges than the US. Foreign companies can still be useful in this process, since they have
the experience of going through the cycle of “cracking the code,” Hewitt said. Ultimately, however, Chinese companies are aware that they need their own indigenous innovations.

Clearly, this will be a much longer-term process than simply replicating the US shale gas boom. The odds are that China remains years away from significant commercial production; some analysts say it will be 2020 or later before shale gas makes a dent in the domestic market.

But given the huge advantages from unlocking its shale potential, the odds are also good that China will eventually figure it out. China is already dependent on crude oil imports, may have twice as much shale gas as the US and has seen the US commercialize it, Hewitt said. “So China is going to work long and hard to commercialize that shale,” he said. “It’s not just going to try for a couple of years and then give up and walk away.”