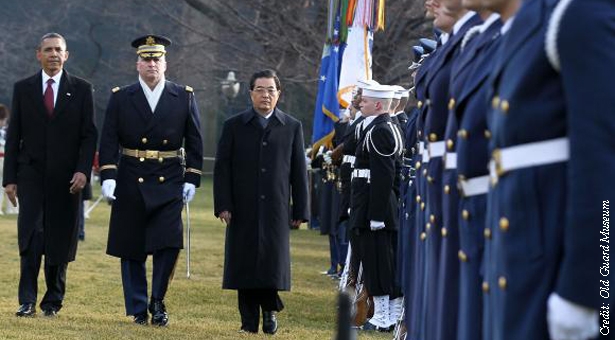 Amid the firecrackers and banquets of Chinese New Year came what seemed like a landmark release of trade data. Figures released on February 10 by the US Department of Commerce appeared to confirm that China had surpassed the US in 2012 as the world’s biggest trading nation, a position the US had held for more than six decades. The US announced that its imports and exports of goods came to US$3.82 trillion in 2012, just below China’s total of US$3.87 trillion.

The Chinese Ministry of Commerce quickly quashed media reports on the subject, clarifying that the countries used different accounting methods. Based on measurements similar to those used by the WTO, the US figures were still slightly above China at US$3.882 trillion. China’s data were also somewhat misleading, since much of the country’s trade involves importing raw materials and parts, assembling them into finished products and then re-exporting them, activities that greatly boost trade figures but add only modest economic value. Even so, to many observers the data were a clear demonstration of the intense economic rivalry between the world’s established power and its rising one.

But regardless of whether the US or China takes the top spot, their leading positions underline the necessity of maintaining a strong trade relationship. Apprehension has spread in both countries that rising tensions in the Sino-US relationship could weigh on the global economic recovery. America’s pivot to Asia has heightened fears within China that the US is seeking to encircle and contain it. Many in the US were dismayed, if not surprised, by alleged Chinese cyber attacks on US businesses and organizations such as the Department of Energy, The New York Times and Twitter. A poll by the Pew Research Center in 2012 showed that significantly more Chinese see the US-China relationship as one of conflict than two years ago.

Given leadership transitions in both countries, 2013 may seem like a precarious time for US-China relations. But while personnel changes for almost all the cabinet officials and ministers in charge of US-China relations will introduce an element of uncertainty this year, the risk that an unforeseen event could derail trade growth now seems slim.

A boat too big to rock

The Obama Administration’s first four years demonstrated the extent to which US-China relations have become mature and institutionalized. When blind activist Chen Guangcheng fled to the US embassy shortly before a high-level diplomatic meeting between the countries in 2012, for example, it seemed like the kind of event that could trigger a major disruption in relations.

However, foreign policy practitioners on both sides acted quickly and decisively to prevent a crisis. As US Secretary of State Hillary Clinton told The New York Times “…we couldn’t risk seeing our relationship founder over this. We would never agree on what happened and why, but we had to resolve it.” The two sides similarly defused the potential fallout from the flight of Chongqing police chief Wang Lijun to the US consulate in Chengdu in February last year.

The US and China will need this maturity to overcome the variety of conflicts that could jeopardize their partnership in the next four years. At present, the most visible threats to the relationship are the potential for clashes between China and its neighbors, whether over conflicting territorial claims in the East or South China seas or as a result of North Korea’s audacious nuclear tests. The US alliance with Japan and partnerships with other Asian countries could encourage the American government to move to counter China if territorial disputes escalate. And of course, other, unforeseen crises could easily eclipse these threats.

Yet both sides’ keen awareness of how essential the US-China relationship is to their continued commercial and political success should help to defuse these controversies. Xi Jinping and China’s other new leaders will ultimately be judged by their ability to deal with a growing mountain of domestic issues, foremost of which is modernizing and upgrading their economy to ensure sustainable growth.

Chinese leaders are not only likely to do their best to avoid rocking the boat with the US, they are also likely to court US companies. Chinese companies desperately need American technology and expertise to develop intellectual property-intensive industries – sectors that will help move the Chinese economy up the value chain and more Chinese consumers into the middle class.

The struggling US economy needs Chinese companies and markets just as much. China Economic Review’s recent interview with a delegation from Chicago to China showed how eager US cities are to attract the fledgling overseas investment of Chinese companies.

Xi Jinping’s government has invoked the term xin daguo guanxi, meaning “new great power relations,” to describe their vision for the future relationship between the world’s largest economies – whatever that means.

At last year’s Strategic & Economic Dialogue, Chinese President Hu Jintao shed some light on the term when he urged the two countries to “prove that the traditional belief that big powers are bound to enter into confrontation and conflicts is wrong, and seek new ways of developing relations between major countries in the era of economic globalization.”

The best way to minimize confrontation and conflict would undoubtedly be for both sides to hew more closely to existing rules-based systems. Among other things, China should finally live up to the pledges it made when joining the WTO, such as opening industries like finance and media to foreign business.

On the other side, the US should ratify the Law of the Sea Treaty, setting an example for rules-based settlement of conflicting South China Sea claims. Systems such as these can help restrain the natural rivalry between the US and China, minimizing unforeseen and crisis-causing events.

But the strongest motivation for the US and China to avoid conflict is the prospect of their continued economic gain. The bilateral economic relationship has grown from virtually nothing when Nixon visited China 40 years ago to an axis of the global economy. In the 10 years since China joined the WTO in 2001, US imports from China have nearly quadrupled, while its exports to China have jumped five-fold. Despite all the seeming risk, ties will endure and grow.