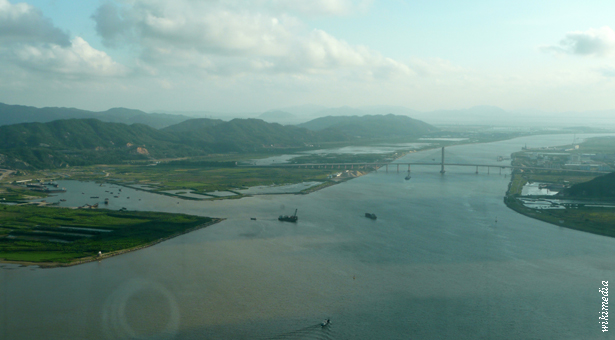 When the Portuguese first arrived in what is now Macau, the islands contained little more than an assortment of fishing villages. Now, Macau is a thriving metropolis – the city that gambling built.

But the former colony, now the world’s premier gaming destination, is running out of space and looking to the mainland for help. Sitting west across the small waterway that separates Macau from the mainland, Hengqin Island could provide more of everything that Macau has, minus the gambling.

The lightly reported-on island will likely start receiving much more press coverage soon. China first announced detailed plans to develop the largely empty island in 2009, building amenities there that are in short supply in Macau. That development is just now gaining critical momentum with the first phase of Chimelong International Ocean Resort, what will be China’s largest resort, scheduled to open later this year.

The logic behind the development: Macau is running out of space and needs an area for spillover. Macau has only 28,000 hotel rooms compared to an average of 77,000 daily visitors, according to a note written by investment bank Citi last month.

Now, gamblers without a place to stay in Macau must return to the mainland before the border checkpoints close at night. This curtails the amount of time, and thus money, spent gambling in Macau. Macau gambling revenue grew 13.5% in 2012 and the expansion underway on the Cotai Strip should help support this growth. But with Cotai already divvied up and slated for development, Macau will be full once again in a few years time.

There are already some signs that too little space could be weighing on gambling revenues. That double-digit rate in 2012 was a major fall from 42% growth the year before. The number of visitors to Macau grew only 4.6% in 2012, compared to 22% in 2011, according to Citi.

There’s hardly space to build more hotels in Macau to accommodate these visitors. The Chinese Special Administrative Region (SAR) has already filled in the water between its two large islands to create the Cotai Strip, with most of that land already apportioned to casinos.

Meanwhile, there’s ample room for building hotels and meeting spaces on Hengqin. The island has about 28 square kilometers of land available for development, according to Citi, although estimates vary. (While the island is at least three times larger than that figure, much of it is set aside under preservations efforts.) Most of the land that can be built on is still undeveloped. Chimelong will kick off broader hotel development on the island with its 1,888 room facility, to be followed later by the 1,200-room Cinese Hotel.

Staying in Hengqin wouldn’t be the same as staying in Macau – there’s no gambling in the mainland after all – but it would be the next-best option. At the moment, visitors to Macau must pass through two border checkpoints, one to leave the mainland and one to enter Macau. Visitors currently pass through both checkpoints back to back.

Hengqin would essentially sit between the two checkpoints. Visitors would go through China’s border check before entering Hengqin. That would ease entry and exit to Macau by allowing visitors to stay in Hengqin, passing through only Macau immigration each time they wish to go gambling. With less hassle to get to and from Macau, visitors might stay longer and spend more.

If Hengqin development succeeds in bringing more businesses, it will be a boon to Macanese business almost across the board. The border crossing from Hengqin to Macau lets out on the Cotai Strip, so the casino companies with properties there – Melco Crown Entertainment, Galaxy Entertainment Group, Sands China – are most likely to benefit from neighboring development. SJM Holdings, MGM China Holdings and Wynn Macau could benefit more post-2016, the earliest they are expected to open for business in Cotai.

But in typical Chinese fashion, development plans are exceptionally ambitious and far-reaching in vision. Authorities hope that Hengqin will succeed in a laundry list of sectors. Hengqin is one of the more recent of five “new areas” that receive preferential tax treatment and fierce government support. The new areas of Binhai in Tianjin and Pudong in Shanghai have exploded in the years since their establishment, attracting businesses that cut across many sectors. Authorities in Hengqin similarly want to develop more broadly, targeting finance, high technology, logistics and others.

By the sound of it, authorities hope the island will be all things to all industries, which hardly seems unlikely. Macau is hardly an industrial center in the vein of Shanghai or Tianjin. Undoubtedly, if Hengqin brings in money from tourism efforts, it could support other industries. For now, developments in Hengqin that support gambling and related tourism seem predestined to succeed.

As Citi notes, Hengqin Island is a long-term play, and its prospects are underappreciated. But with the only place in China where gambling is allowed rapidly running out of space, Hengqin’s supporting role seems to be a sure bet.