Home Law & Regulation The hog heard round the world 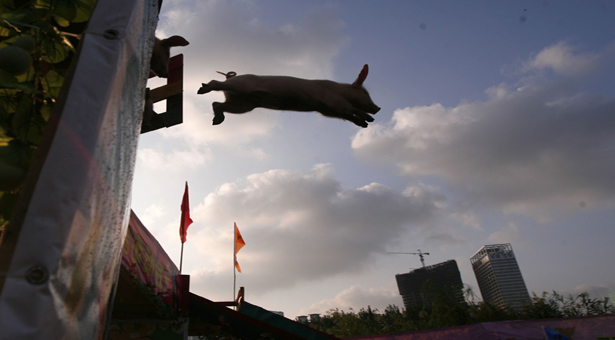 The hog heard round the world

Many visitors to the Iowa State Fair go to sample the delicacies on a stick, from double-bacon-wrapped corn dogs to deep-fried butter. Others go to watch the hog-calling contest (no live pigs allowed) or gaze at Snow White and the seven dwarves carved entirely out of butter. Fewer people venture off the beaten path to Pioneer Hall, where growers compete to win US$50 for the tallest corn plant.

Contestants have had a hard time of it this year. The worst drought in 50 years has stunted crops in Iowa, the biggest soybean and corn producer in the US, and agricultural states throughout the Midwest. In early August, the US Agriculture Department categorized half the country’s corn crop and roughly 40% of its soybeans as poor or very poor. Corn prices rose almost 23% in July alone.

Record soybean and corn prices have left many wondering whether the drought will trigger another bout of food-related inflation in China, which struggled to restrain soaring food prices last summer. China is a big consumer of US products, purchasing 14% of US agricultural exports last year, mainly soybeans and corn.

But despite the agricultural ties between the two countries, the damage to US crops seems unlikely to trigger much short-term inflation in China. Inflation remains low, and China has seen a boom in the hog supply over the last several years. There could, however, be cause for worry further on down the line.

The price of pork is a major concern for most watchers of inflation in China. China consumes half of the world’s pork each year, and the meat is a major factor in the consumer price index (playfully dubbed the “China pork index”). Some believe that the rising price of corn and soybeans, the base of pig feed, will cause the price of pork to spike, creating inflationary pressures that spill over into the broader economy.

But these trends seem unlikely to affect consumer prices within the next few months. While global food prices have been rising, they have been doing so from a relatively low base. The UN Food and Agriculture Organization’s food price index climbed six percentage points in July, but it remained well below the peak it hit in February 2011, just before China’s period of rampant inflation began to take off.

Inflation within China also remains moderate. Consumer prices rose just 1.8% year-on-year in July, the fourth consecutive monthly decline, down from 2.2% the month before. The index may rise in coming months, but it is unlikely to approach the 6.5% spike that occurred last July.

Furthermore, China’s corn and soybean harvests are thriving, and China’s exposure to the corn market is limited. China imported 2.5% of the corn it consumed in 2011, though it brought in 80% of the soybeans. Beijing also appears to have sufficient reserves to help alleviate shortages.

Finally, the supply of hogs tends to be cyclical, and right now China is in a period of plenty. Prices for piglets and pork in China shot up in 2010, leading to an increase in sow purchases and thus more pork today.

Although feed costs are rising, farmers are likely to grin and bear them for the next few months, since China’s big season for pork (the winter and Chinese New Year) is approaching.

The bigger risk is that high feed prices and oversupply today may squeeze farmer’s margins, causing them to raise fewer piglets, CLSA chief China economist Andy Rothman wrote in a recent note. That could exacerbate the boom-and-bust cycle of pork production, leading to lower supply and higher prices, potentially by early next year.

All the more reason to enjoy bacon-wrapped delicacies today.