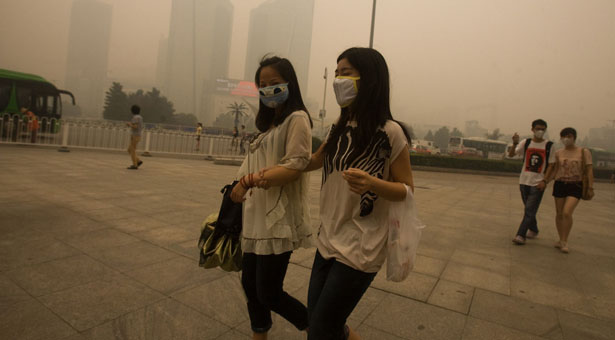 China stopped “crossing the river by feeling the stones” and took the plunge into modernization when it entered the WTO in 2001. The rapid development of a country housing nearly 20% of humanity over the past three decades has precipitated the tipping point for climate change. China officially became the factory to the world in the last decade, and it surpassed the US as the world’s largest carbon emitter in 2007.

Many of these emissions were still tied to US development. Between 7% and 14% of carbon emissions produced during China’s export boom were actually made manufacturing products for American consumers, Wen Jiajun, the China project fellow at the International Forum on Globalization in 2009, wrote in a report. Nearly one-quarter of China’s carbon emissions during these good old days could be attributed to exports, according to Wen.

Now, with China gradually rebalancing its economy from export-led factories and grand infrastructure projects to consumption, the country’s energy needs are poised for another great leap. If ever there was a time for China to impress the world with its new wealth and make history instead of just repeating it, it is this decade.

Unfortunately, China’s current targets and policies for reducing and mitigating carbon dioxide emissions are tepid at best, brinksmanship at worst. To stabilize global climate change, China must implement more ambitious plans and targets than are on its drawing boards now.

Despite China’s momentum in developing renewable energy sources that will make up nearly 16% of the country’s energy generation portfolio by 2020, coal will still contribute the lion’s share of overall power. In 2010, China represented more than half the world’s appetite for coal, and it is projected to burn 35% more coal in 2020 than in 2010 to meet its energy needs. Overall, the use of coal and other fossil fuel in China will rise by over 40% by the end of the decade if left unchecked.

Admittedly, Beijing is actively implementing programs to boost energy efficiency and reduce its emissions intensity, or carbon put out per unit of GDP. The government aims to reduce carbon emissions per unit of GDP by 17% during the 12th Five-Year Plan (2011-2015), and by 40-45% from 2005 levels by 2020. The country has plans to impose an energy cap of 4.2 billion tons of coal-equivalent by 2015, and it has drafted a climate change law that features a national emissions-trading scheme and carbon tax.

However, these announcements fall far short of what needs to be done to reverse the effects of rampant carbon emissions. Furthermore, meeting even token annual goals in energy efficiency has been problematic. In 2011, for instance, China cut its energy used per unit of GDP by only 2%, rather than the projected 3.5%.

Hot under the collar

Given the likely shortfall in limiting emissions, a study by the Massachusetts Institute of Technology projects that China’s growing energy requirements will on balance contribute to an increase in global temperature of about 0.1 degrees Celsius by 2020. The earth’s surface temperature has already risen by 0.8 C since the late 1800s, when the industrial revolution replaced wood with coal as the engine of globalization.

The UN Framework Convention on Climate Change – of which China is a signatory – identified a 2 C increase as the threshold beyond which climate change will become self-sustaining. The last time the earth saw a comparable rise in temperature was during the last interglacial period, 125,000 years ago, when sea levels were six to nine meters above what they are today, inundating now-populated islands and coastal regions.

Without substantive efforts on the part of all industrialized countries to reduce carbon emissions, global average surface temperature will increase by about 5.5 C during this century, according to the MIT study.

Stabilizing warming to a livable 1 C point would require all industrialized countries to apply a greenhouse gas tax that would increase at 4% per year. All coal-fired power generation processes would need to implement carbon capture and storage technologies. Natural gas and electric vehicles would play a major role in stabilizing temperature rises. And alternative energy technologies would need to dominate on a scale that dwarfs current imaginings.

If China does not contribute to a robust global effort at remediation, simulations show global temperatures more than doubling before the end of the century to breach the 2 C red line. China, in other words, is crucial in holding the line against the earth’s next great climate reset.

But implementing this great policy leap forward will require overcoming significant barriers. First, frequent gaffes on data collection are already weighing heavily on computer models used to predict the rate and impact of climate change. The authors of a study in the journal Nature Climate Change argue that Chinese under-reporting of annual carbon emissions data may be as much as the total yearly output of Japan, the world’s fifth-largest emissions contributor. Statistical opacity also threatens to render carbon-trading bourses in China mere money-transfer schemes.

An even greater barrier to effective remediation efforts involves a counter-productive worldview that imperils serious climate change initiatives, even on an international level. “I have spent a fair amount of time trying to convince my Chinese friends that climate change is a real threat instead of another conspiracy by the rich countries to stop the economic growth of the developing countries,” writes Wen Jiajun. Modernizing China still retains a sense of being history’s greatest victim.

Finally, it is difficult to tell which of China’s environmental targets are actionable policies and which merely stem from point-scoring in the back rooms of international climate change conferences. For instance, the country’s climate change law may not be ratified for another three years, while a nationwide trading platform will likely not be implemented until the latter half of the decade. Analysts see the proffered carbon tax as being so low as to be inconsequential.

Unfortunately, China does not have the luxury of “feeling the stones” toward mitigating climate change. Now, with the world fast approaching the 2 C red line, it’s time for the country to take a real leadership role and transform its society and economy to ensure its survival.

Counter-intuitively, the most effective way to spur the other great polluters of the world into action is through China creating a “Sputnik moment” by launching its own dramatic climate stabilization actions. Ultimately, either we all take the initiative to retrofit modern society for sustainability, or the earth will do it for us.