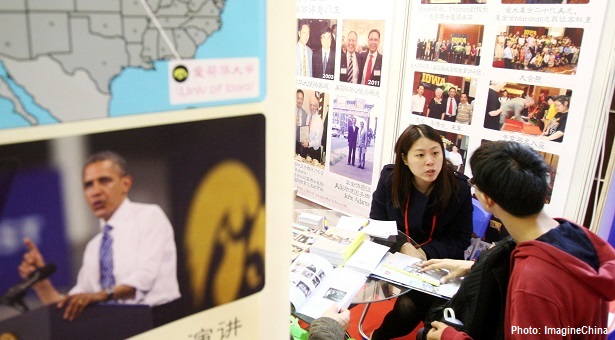 For decades there was no alternative for most Chinese students to sitting the grueling, three-day test known as the gaokao—the shortened Mandarin name for the National Higher Education Entrance Exam. Nor was there any choice but to slog through the three-year cram session that is Chinese high school which preceded it. But today the children of China’s elite are being sent abroad for an education—President Xi Jinping’s daughter among them. She graduated last May from Harvard University after studying English and Psychology there under a pseudonym.

If that sounds like a perk of political privilege, it is increasingly less so. A 2012 report from China’s Industrial Bank Co. on the spending habits of high-net worth individuals shows just how much China’s elite devote to their children’s education: Of the 2.7 million Chinese citizens who made over US$960,000 that year, fully 85% intended to send their children abroad for an education, at an average cost of US$27,200.

“Chinese students who choose to study abroad think education in China is very test-centered but not student-centered,” said Guy Sivan, co-founder of Vericant, a firm that partners with North American admissions officers to provide third-party video interviews with their Chinese applicants. “It focuses more on standardizing and having everyone be similar, whereas education abroad [in the US] is more student-centered and individualized. Students can choose to learn what they are interested in and it helps build each student’s uniqueness.”

That is a welcome change for many of the students who are able to sidestep a torturous educational experience at home. But the money needed to do so restricts the pool of potential applicants to a small (albeit growing) sliver of Chinese society. This divides the nation into the few who have the means to pursue a less strenuous education and the many who do not. If the Chinese government wants its education system to become globally competitive, it will first have to reconsider the rote learning requirements that now prompt many high-net income families to send their children abroad.

Parents turn to private schooling when they are not satisfied with the rigid educational structure offered by public Chinese education or believe their children would benefit more from not participating in it. Between 2004 and 2012, private schools from kindergarten through high school saw significant increases in enrollment: primary school enrollment grew by 6.2%, middle school by 27% and high school by 43%.

Once taken out of the public educational system these students rarely reenter. They usually spend their undergraduate years abroad, and have recently begun to leave at an earlier age. In 2005, the US granted only 639 Chinese visas for high school students. By 2013, that number had grown by almost fifty times to 31,889. This expansion of education abroad necessarily comes from the upper echelons of Chinese society:  In 2013 the average annual wage for an urban worker in China was slightly above US$8,000, according to the National Bureau of Statistics. That would cover only around 64% of the average tuition at a private high school in America.

Sivan described three different types of parents he had encountered at Vericant:

• Returnee parents: “These parents have personally experienced studying abroad and know that it would be the best for their kids, so they choose to educate their children abroad. These parents are normally those who studied abroad a while back while it was not as easy to do so and did it through hard work. They may also hold a senior position in big international companies or have started their own Sino-American business.”

• Aspirational parents: “These parents have money, and want their kids to have the best; cost is not any issue. They don’t know which country, or which school is the best but they can hire an agency to help them on this.”

• Escapee parents: “These parents don’t want their kids to suffer in the intense competition of the Chinese education system or they already feel that their kids will fail in the severe competition. So they are willing to spend their life’s savings on their kid to buy them a nice environment, less competition and happy life.”

While a substantial perceived gap between Western and Chinese education quality and their respective levels of competition has served as the core driver of demand, it is the rise in relative wealth that has made it possible to realize these desires. An increase in promotion by US institutions to recruit Chinese students through companies like Vericant has also helped match supply to demand. There appears to be little reason to expect those numbers to do anything but grow.

None of this is to denigrate the quality of top Chinese universities. In this year’s annual rankings of Asian universities by the Times of Higher Education, the number of China’s universities on the list overtook Japan’s.

“China is Asia’s new number one in the rankings, with three entrants in this year’s table tilting the balance of power in the country’s favour,” said Phil Baty, the rankings editor for the Times. “Many of its more established institutions such as Tsinghua, Peking, Sun Yat-sen and Shanghai Jiaotong universities have risen up the table this year, too.”

Yet wealthy Chinese families still prefer Western schools to their own.

“There is an issue [in China] about the children being on a treadmill of exam driven success. In the future, you may need students or graduates who are more well-rounded, who have creativity as well as factual knowledge,” Baty said.

Still, he was optimistic about local colleges’ prospects. “I think there is some evidence that some of the leading Chinese universities are very aware of that and there is a willingness to try and increase a more liberal-arts based education. I think that they are willing to look at the American model and have a broader based curriculum, a wider variety for the students,” he said.

However, the greater part of parents’ concerns lie in what comes before university life than the curriculum awaiting their children once accepted. The extent to which the Chinese government is willing to reform pre-college education will be the decisive factor if it hopes to convince the country’s best and brightest to attend its own universities.

In 2013 the Ministry of Education attempted to enact reforms that would minimize the rigor of Chinese education. The proposal aimed to require a minimum one hour of exercise, transparent admittance procedures, reduced homework, and overall enforcement strengthening among several other factors that seem to be a step in a less lockstep direction.

The initiative was welcomed by parents and teachers, but earlier pledges of reform along similar lines failed to bring structural change. Without changes to the gaokao system it seems likely that more students will seek to study abroad, particularly as m
ore adults who did so become parents themselves. Indeed, the day when these families begin insisting once more that their children be educated in China may be the surest sign that reforms have finally succeeded. •

Next time in part 2: How perceptions of China’s education system shape citizens’ willingness to challenge the status quo.