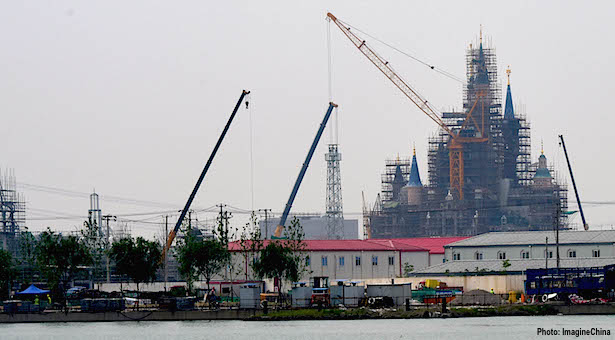 In 2006 the Spring Festival holiday in Hong Kong began on a Saturday and ended on a Tuesday. The mobs hit the magic kingdom on Wednesday.

It turned out that Disney had sold special tickets to its Hong Kong park that weren’t valid on certain days, including Spring Festival. But in Hong Kong that didn’t include the three extra days allowed for the holiday on the mainland. Soon tour agencies were busing in more Chinese visitors than the park’s operators could possibly handle. After a lackluster performance following its launch, the 30,000 person-capacity park was suddenly offering refunds as it turned back tourists at the gates.

“It was a major disaster,” said Markus Schuckert, an assistant professor at Hong Kong Polytechnic University’s School of Hotel & Tourism Management. “They had valid tickets, they should’ve been able to enter the park.”

The upshot was all that unmet demand, tantalizingly close across the Hong Kong-mainland border. Nine years later Disney is nearly in a position to take advantage of it with Shanghai Disneyland scheduled to launch in the spring of 2016.

Long in the coming though it may be, there are few safer bets than Shanghai Disneyland. There are also far more far-reaching ramifications to the Disney kingdom’s mainland debut than the castles of cash it will bring in. For Disney the new park will be a promotional tool as well as intelligence source, both a bastion and beachhead for the company’s intellectual property on the mainland. For China it represents a dynamic new rival for existing sophisticated park operators, imminent apocalypse for low-quality competitors and a new, higher standard to which the country’s burgeoning theme park industry will inevitably be held.

But yes: Shanghai Disneyland will also almost certainly make obscene gobs of money—though thanks to advancements made by local rivals in recent years, it’s unlikely to be the only one.

There is no denying Disney’s dominance of the global theme park industry, and the latest TEA/AECOM Global Attractions Attendance Report released in June attests to the enduring growth in foot traffic at practically all of its locations (save for Disneyland Paris, where visitor numbers fell 4.7%).

Walt Disney Attractions easily topped the latest rankings of theme park groups, with attendance totaling over 134 million visitors in 2014. Visitors to Disney’s parks were more than double those of runner-up Merlin Entertainments Group and well over triple the attendance of Universal Parks and Resorts in third place. But China’s theme park industry is shaping up in its own right, adding urgency to Disney’s debut on the mainland.

China’s OCT Parks group came in fourth place at almost 28 million visitors, and the top ten for 2014 saw two more Chinese groups’ debut: Ninth place had Chimelong Group with 18.6 million visitors and Songcheng Worldwide came in tenth with 14.5 million—respectively up almost 60% and over 103% from 2013. (Chimelong’s successful launch of its Ocean Kingdom park in Zhuhai drew big numbers and a prestigious industry award.) These groups actually managed to squeeze two other Chinese groups off the list from 2013: Fantawild and Haichang.

Nine of the top ten theme parks in the world were Disney’s in 2014, though two mainland parks made the top 25 and Hong Kong Disneyland came in fifteenth. But 13 of Asia’s top theme parks were located in greater China in 2014, the top two of them in Hong Kong: Ocean Park in fourth and Hong Kong Disneyland in sixth. Chinese tourists drove growth around the region as well. Lotte World in South Korea saw a big increase in attendance almost entirely thanks to mainland Chinese visitors.

Chimelong’s Ocean Kingdom was open for 11 months last year but is already at #10 of Asia’s top 20 list and is rapidly expanding its hotel capacity. Adult admission of RMB350 is 80% higher than the competitive market price of RMB200, according to AECOM, indicating that people are willing to pay for quality. Disney is counting on it.

“Disney obviously gains access and a share of huge, growing, rising income market,” said Mark Soskin, associate professor economics at the University of Central Florida’s College of Business. Soskin, who has co-authored a number of papers on Disney’s growth and business model with fellow professor Bradley Braun, said the park had effectively been pre-sold with little marketing thanks to Disney’s global recognition.

The reverse is true as well: Shanghai Disneyland will provide the company with a new venue to promote its intellectual property. Already it has announced that the new park will feature an area dedicated to the Star Wars franchise, which currently carries little of the cache of Mickey or Marvel in China. The Shanghai location will also provide a valuable intelligence gathering point for Disney as it tries to figure out what will play best to mainland audiences. But branding won’t stop at the park gates.

“The Chinese [tourist] mentality is very much for shopping and merchandise and then giving gifts back home,” Schuckert said. He suggested that the proclivity to bring back souvenirs would play an important role in Disney’s strategy for the new park, much as it does in Tokyo’s Disneyland. That would mean more merchandise in more Chinese homes, even those who don’t visit the park.

Soskin added that other Disney parks would likely benefit from the new one as well. “Each new park spreads the cost (and thus lowering Average Cost) of developing and installing new rides and park attractions,” he said.

For China the most immediate impact of Shanghai Disneyland will be on its domestic theme park industry. While up and comers like Chimelong have raised the bar, says Schuckert, “Disney will be more advanced because Disney always operates on the highest standards possible.” That will play a role in educating consumers about what a theme park can be.

“It will really impact the industry. The Chinese tourists will experience better parks and they will know where to go and where not to go in the future,” Schuckert said. He suggested that while such top-tier competition as Chimelong, Songcheng, Fantawild and Haicheng would survive, the outlook could be grim for lower-tier parks without a strong theme or quality attractions. “Maybe we’ll see a shakeout of theme parks, especially in the area around Shanghai,” he said.

That could encourage blow-back from those affected, as well as those who view Mickey less as cuddly mouse and more as invasive vermin. Michael Keane, professor of Chinese media at Curtin University, said that not everyone – particularly not nationalists – would appreciate Disney’s inroads on the mainland. “Mickey Mouse is a potent symbol of capitalism, creativity, the US and all that goes with that,” Keane said. “Disney represents… a kind of archetypal Western company.”

But market forces could also play to the company’s advantage, and to the industry’s. Where many feared that Hong Kong Disneyland’s debut would marginalize the territory’s established park, Ocean Kingdom, Schuckert said both parks
now do good business and have benefited, from healthy competition.

Soskin agreed that cultural issues were critical, and said Disney had learned to be flexible without compromising or diluting its brand reputation. But the new park isn’t entirely without risk. “Even a subtle error can offend local sensibilities that virally explodes in this age of social media into an international embarrassment that takes months or years to reverse,” he said. “Rival parks and tourism attractions may have an interest in blowing such incidents into an edge via advertising; but just as often, surrounding, parasitical business and entire regional economies have a strong fiscal incentive to protect and defend Disney.”

There is likely plenty of local interest in Shanghai Disneyland’s success. At 963 acres the new park is much larger than its Hong Kong forbear, and Disney owns only 43% of the 963-acre park, though it gets 70% of the management company running the resort. The rest of those assets belong to a consortium of state-owned companies known as Shanghai Shendi Group, putting the local government firmly on Disney’s side. The park also received an enormous cash injection from the Agricultural Bank of China in 2014 when Disney decided to delay the park’s opening to avoid repeating the underwhelming opening performance of Hong Kong Disneyland, which early visitors complained felt half-finished.

Higher-end domestic competitors could well see their own price points fall in line with Disney’s, based on what Braun and Soskin observed in Florida. “It was amazing in our research to discover how precisely tacit price collusion among the Florida theme parks transitioned from a dominant price leader (Disney) to a collusive pricing behavior (Disney, Universal, and Sea World),” Soskin said.

In terms of the broader entertainment industry, Keane said the Disney’s expanded presence on the mainland also increased the likelihood of a Disney-China co-production in the near future, echoing what is happening elsewhere in the film industry.

“This kind of thing will make a killing in the theaters and give the local industry some credibility,” Keane said. That would fill everyone’s coffers, and encourage more expansion. “Disney after all is about expanding empire,” he said. ♦