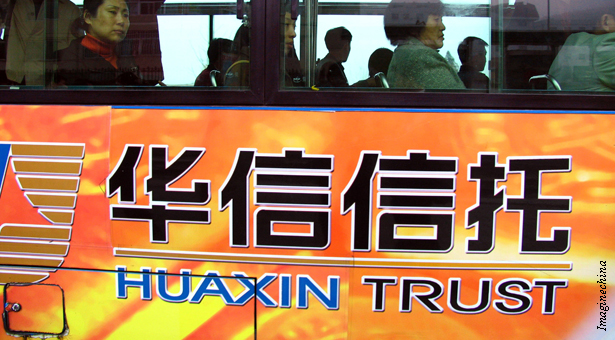 It took a crisis for Beijing to shine a light on the shadow hanging over its financial sector.

Shadowy Chinese lending reached a point that Chinese regulators could no longer ignore last year: A US$22.5 million wealth management product (WMP) originated by a major bank went bust in December, leaving investors not knowing for months whether they’d get their money back. The Huaxia Bank incident drew a quick pledge from the government to issue new regulations on the high-risk, high-return products that allow banks to circumvent official restrictions on lending and saving rates. Beijing delivered on that promise in late March.

But also late last year, Citic Trust declared that it would not pay out interest on time to investors in trust investment products. The company later said some investors in its trust products – similar to WMPs but issued by non-bank trust companies with larger minimum investments – would not be paid back at all. Yet this incident has failed to draw the same regulatory response from Beijing.

By failing to take action, regulators are allowing the shadow of informal lending to continue to grow through trusts. Shady unofficial lending, predominantly done through WMPs and trusts, more than tripled between 2009 and 2012 and equates to roughly one-quarter of the country’s GDP, according to statistics compiled by brokerage CLSA. Shadow lending is often funneled to some of the riskiest borrowers in the country, presenting a major threat to the whole financial system if they default on those loans.

The lack of regulation on trusts to match that on WMPs leaves a gaping hole in shadow banking regulation.

Trust companies account for nearly half of institutionalized shadow banking with the industry holding US$1.2 trillion (RMB7.47 trillion) in assets under management at the end of 2012, according to CLSA. That trails traditional banks by only a few billion dollars.

This has left analysts speculating on whether financial regulators’ next major crackdown will be on the trust industry.

“Trust companies for now I would say present an increasing risk or threat to the stability of the financial system, but it’s still somewhere away from the tipping point,” said Liao Qiang, a Beijing-based analyst for credit rating agency Standard & Poor’s. “I would say the government must be very cautious and somewhat worried about the situation right now.”

What’s not to trust?

Trust companies potentially pose an equal risk to the financial system as wealth management products. A trust company is merely intended to act as an intermediary, connecting investor money to projects that need it without making loans themselves, as banks do. The borrowers – real estate firms, industrial companies, infrastructure projects and others – are often unable to get traditional bank loans because they are deemed too risky. In addition, the lenders often don’t fully understand that they could lose their money if the investment goes bad.

Trust companies are subject to different, and less stringent, regulations. The China Banking Regulatory Commission (CBRC) set minimum net capital requirements in March last year designed to ensure that trusts have enough money to meet their obligations. The regulator is still considering further regulation on trusts. Investors in trust products have also long been required to hold a minimum amount of assets to be eligible to buy into trust products.

“You’ve got to be a big boy. You’ve got to have a lot of money, so if things go bad, that’s fine,” Cheung said. “These more institutional investors, these big lenders should be able to take a hit.”

Still, the worry remains that trusts have grown so fast that even these safeguards aren’t enough. Trust assets last year amounted to 12-times what they were in 2007. It’s also often unclear how much liability trust companies themselves hold for the loans they facilitate.

Not only are the dangers of trust products similar to wealth management products – in many cases, trust products are actually WMPs. Banks often act as originators of trust products, raising the funds through WMPs and then passing them off to trust companies to invest. CLSA statistics suggest that there is US$326 billion (RMB2 trillion) counted both as bank WMPs and as trust assets, and many suspect more widespread and subtle overlaps in the way the products are sold.

In some cases, trusts are even under the same ownership. Citic Trust, for example, is owned by the same parent as China Citic Bank. Patrick Chovanec, chief global strategist at Silvercrest Asset Management, pointed out that Chinese who want to buy a Citic Trust product can go into a Citic Bank storefront to do it, even if the bank has no other involvement in the trust product. Customers can be left with the false impression that a bank is backing a trust.

Such a close relationship between banks and trusts obfuscates the risk of these products. Roughly two-thirds of trust products are single-unit trusts (sometimes called single-fund trusts), according to CLSA statistics. These product are in theory safer, as they match one investor to one borrower so all involved can more easily understand the relationship and the risk.

However, Liao of S&P said that most of these single-fund trusts are actually deriving money from banks acting as the single investors. The banks themselves are bundling the money from many individuals, who often don’t understand or ask what the underlying asset is.

Ultimately, the real danger of trust products, and the reason customers probably don’t pry too much into the underlying assets, is the same moral hazard inherent to the entire Chinese banking system, Chovanec said. Both individual depositors and financial institutions often assume that the government will bail them out if an investment does go bad.

There’s certainly precedent for it – the government allowed the Big Four banks to offload US$169.3 billion in bad loans in 1999, for example. When a US$22.5-million WMP originated by Huaxia Bank blew up last year, the investors were eventually repaid.

“If you don’t face the possibility of loss, why not make the investment?” asked Chovanec.

Half regulation, no results

While the March regulations on WMPs should apply to trust products tied to banks, they fail to limit those trust products originated by non-bank institutions. That could include third-party wealth management companies, large corporations with extra cash to lend out or the trust companies themselves, Liao said.

By only putting the squeeze on WMPs, regulators may be merely pushing investment toward less-regulated trust companies. Bank issuances of WMPs declined 8.8% in April. Yet in the same month, total social financing – one of the broadest measures of credit – grew 21.8% year-on-year in April, the fastest rate since June 2011. Roughly half of that credit growth came from shadow banking, according to Chovanec. With shadow lending still growing at a fast clip despite fewer new WMPs, the growth may be coming through trust products.

Regulators’ goal, and the test of whether rules on shadow banking work, should be to rein in this overall credit growth, Chovanec said. That’s the real threat to the economy: The more credit is fed into the financial system, the less efficiently it is used and the more it is used to rollover existing debt. If that trend is allowed to continue, bad debt could snowball into widespread defaults that in turn would cause massive losses for investors in shadow banking products and cripple the financial system.

“[China Banking Regulatory Commission] can say all that they want about all of the elaborate rules that are going to guide private wealth management products, trust products, etc,” Chovanec said. “The fundamental question is ‘Are they determined to rein in credit in all the forms it takes?’” Regulators may just talk tough while continuing to pump the economy full of credit to try to pin up China’s slowing GDP growth.

The CBRC would do well to slap regulations on trusts to complement those on WMPs and strictly enforce the rules on all fronts. Only then might credit growth actually come down. Otherwise, the shadow hanging over China will only continue to grow, threatening to plunge the entire country into darkness.