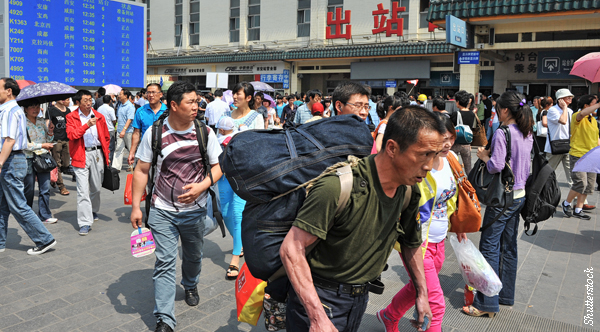 When China’s State Council announced in late July that it would end the official division of Chinese residents into rural and urban, it ended a practice that for almost six decades represented the worst of the country’s oft-decried residence permit, or hukou, system. When introduced in the late 50’s the restrictive policy bifurcated Chinese into an urban minority with government-provided benefits and a rural majority expected to feed both cities and itself.

Today over half of China’s population already lives in the cities. A blueprint for the country’s urbanization announced in March plans for 60% of the population to be urban by 2020, meaning another 100 million Chinese will move to cities. The plan also calls for 45% of the population to have urban hukou, meaning another 250 million once-rural residents will need to be registered in cities. This would theoretically entitle them to better benefits in areas such as health care and education.

The State Council provided general guidelines in its recent announcement on how the central government wants urbanization to proceed: few to no residency rules for those migrating to smaller cities, and increasingly stringent requirements as urban populations pass the 1 and 3 million marks. Cities with over 5 million people can use a “points” system to decide who is accorded residence, a practice already used by larger cities like Beijing that weeds out the vast majority of hukou hopefuls in favor of high-earning or highly educated applicants.

However, these developments are less impressive in light of the policy and population shifts of recent decades, which lessened the importance of the urban-rural split on paper, but reinforced it in reality as the central government handed over hukou decision-making to cities themselves. And while many urban residents rode China’s real estate boom to riches, land policy regulating farmers’ plots remained a collectively-owned holdover from the country’s pre-Deng days. The result is an urban underclass in China’s top-tier cities, but not of them. That still seems unlikely to change.

“In terms of what is the impact of these new regulations on the flow of migrants, I’d say pretty much nil,” said Michele Geraci, assistant professor and head of the China Economic Policy Program at the Nottingham University Business School in China, as well as the maker of a documentary on urbanization in China. “In a way the announcement is just an officialization of what was already happening in practice. [Migrants] cannot move where they want to move, they can only move where they don’t want to move.”

Indeed, in an exhaustive overview of hukou policy and reforms for The China Quarterly in 2008, China scholars Kam Wing Chan and William Buckingham documented many of the measures mentioned in the latest announcement being practiced by cities around the country, already facing an influx of migrant workers without the funding or infrastructure to handle them.

“The cumulative effect of these [2008] reforms is not abolition of the hukou,” wrote Chan and Buckingham, “but devolution of responsibility for hukou policies to local governments, which in many cases actually makes permanent migration of peasants to cities harder than before.”

In truth, the rural-urban distinction was vestigial even before the new administration’s debut. That’s because hukou classification previously had two types of classification: urban-rural and local-migrant.

Thus, until recently, one could in most major Chinese cities come across urban locals, urban migrants, rural migrants, and even rural locals, whose agricultural land often borders a city proper but has yet to be officially incorporated into the municipality’s urban territory. To appreciate how policy evolved to make the urban-rural aspect largely irrelevant requires a peek into the tangled skein of hukou history.

In the years after the hukou system was established in 1958, the urban-rural distinction served to determine who received state-provided benefits such as entitlement to state-subsidized grain rations, state housing, employment and medical care. Rural hukou holders had to fend for themselves on all these fronts and others, as the state expected farmers to be self-sufficient. Thanks to strict control and regulation by the central government, changing one’s hukou from rural to urban – and enjoying the attendant benefits – was all but impossible for most.

Up to the cities

However by the early 90’s urban hukou status had lost much of its former cache and, with the end of grain rationing in 1992 throughout most of China, most of its significance. By as early as 1993 a State Council working group was already circulating a proposal draft calling for the end of the urban-rural hukou distinction and adoption of a unified system that categorized citizens based only on their permanent residence. It also recommended allowing local governments to manage their own hukou-related affairs.

The former suggestion was dropped, but by mid-decade cities were running the hukou show. By 2001 the other aspect of hukou classification – local vs migrant – was the only one that really mattered. As social services formerly provided by the central government also devolved to local governments, citizens’ state-provided benefits came to depend primarily on where they were registered – meaning city governments had both the means and motive to deny outsiders access to social benefits.

Kam Wing Chan, co-author of the 2008 hukou paper, says he expects population flow to big cities will continue, since that’s where most jobs are being created. How local governments actually implement policy in light of the new guidelines is still basically up to them. “They can make it very hard or make it very easy depending on what they want to do,” Chan said.

This land is their land

Despite the end of rural-urban distinction, the State Council made clear that it isn’t going to end one of the main benefits of rural residence: the right to farm a small patch of land. Many migrants from the countryside view returning to the fields as a fallback option of last resort should urban employment opportunities dry up. In fact, the latest reforms do allow migrants from the countryside to keep that right even if they manage to snag an urban hukou elsewhere. But even here, former rural hukou holders get short shrift thanks to China’s land classification scheme.

Land in China is divided broadly into two categories, urban and agricultural. While all land is technically the state’s, the 70-year leases on urban land can be bought and sold freely. Agricultural land, including all that granted to former rural hukou holders, is still owned by local collectives established in the late 50’s, and is leased to farmers for extendable 30-year terms – without trading rights. No matter how valuable a farmer’s plot might become, the right to sell it remains with the collective. And while collectives can’t develop that land, they can sell it, and local governments can reclassify it as urban. The two can and often do collude to swipe the earth out from under local farmers’ feet.

A draft of China’s latest urbanization plan released in November promised farmers the chance to finally mortgage their land or transfer use rights, and would’ve established village markets for trading those. This was all absent from the final version in March, and the latest policy announcement only promises to preserve farmers’ right to plow their parcels after they urbanize. Hao Zhou, China economist for ANZ Bank in Shanghai, said the reform of China’s rural-urban land ownership rights divide was still uncertain.

“If everyone in rural areas can obtai
n the right to the land for themselves it will make a huge difference, because it means that China will protect the specific ownership of specific farmers going forward,” Zhou said. “But it’s not clear whether China will do that.”

Still voting with their feet

Nor are migrants moving where the central government wants them to, despite its strategy to make smaller cities more attractive. A study by research firm GK Dragonomics found that investment policies that target the urban-rural wealth gap by investing in smaller-scale cities may have encouraged relatively expensive, wasteful projects among some, even though many saw their populations decline from 2000-2010. Meanwhile, some larger cities saw relative underinvestment compared to their population growth during the same period, meaning they had fewer resources to deal with the migratory consequences of their economic success (see our interactive map).

Under the latest guidelines, 14 of the cities that saw relative over-investment would impose additional hukou requirements, and seven of those had populations nearing the five million mark, at which migration requirements are now supposed to become even more strict. But even the classification scheme for city population is troubled: the new State Council document refers to ‘urban districts’” when breaking down city size. That would make the city of Shantou in Guangdong province, for example, a 5-million city with access to the most strict hukou requirements – even though far fewer actually live in the city proper.

For these reasons and more, China’s current urbanization drive fails to address the systemic problems that make its now former famers second class citizens in the top-tier cities where most of them live and work. Without real changes to land ownership and social welfare policies, the urban-rural divide will persist – even as those on either side of the gulf live increasingly together. ♦