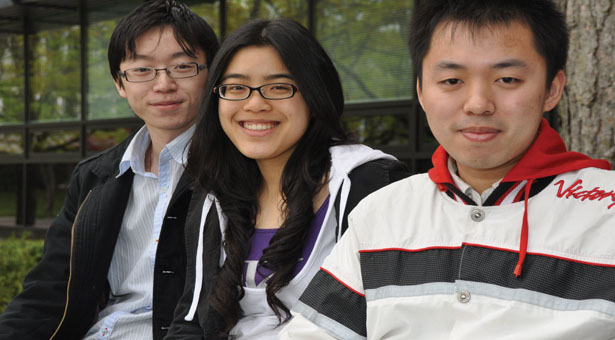 The term haigui (海归) – literally “sea turtles,” which leave their shore of birth and venture far out to sea, to one day return home and procreate – became popular slang more than a decade ago in China. The term referred to mainland Chinese who go overseas to study, stay for some years to work, and eventually return to the mainland where their overseas experience and credentials command high salaries and positions.

In Shanghai, one hears the term a bit less these days. Yet young Chinese students are swimming overseas at a steadily increasing rate, especially to the US. They come to the states hoping to complete online graduate degree programs. The number of Chinese students enrolled in US institutions of higher education increased by 23% in the 2010/2011 school year to nearly 158,000 students, or nearly 22% of the total international student population, according to the Institute of International Education.

“Not only is China the largest country of origin for international graduate students in the United States, but the growth in applications from China in 2012 outpaced that of all other countries and regions included in the survey,” writes the Council of Graduate School.

There are several explanations for these sojourns. First, the number of seats at the better Chinese universities remains woefully less than the number that mainlanders demand. Chinese also widely recognize that educational quality at even the top mainland institutions is suspect, a fact partially illustrated by the difficulty fresh graduates have securing employment. So the Zhangs and the Wangs and the Zhous are keen to give their little emperors and empresses a leg up on the career path.

Finally, these families increasingly have the money to do so. Overseas experience still commands a salary and career premium (albeit not as much as in the past).

One advantage of Chinese academic interest in the US is a small reduction in the US$150 billion trade imbalance between the two countries. Those 158,000 Chinese students are “importing” to China educations worth an aggregate US$5 billion in tuition.

But other effects of this trade in education will prove far more long-lasting and powerful. It doesn’t take a crystal ball to see that increasing strife between the US and China is one of the greatest geopolitical threats in coming decades. Surely some of the million-odd Chinese who have lived in the US have by now gained affection for the place. As they become leaders of families, businesses and perhaps government, that affection should translate into an incremental reduction in potential friction.

Unfortunately, the US-China trade imbalance extends to academia: While more than 270,000 US students studied abroad during the 2009/2010 academic year, less than 5% of them – about 10,000 – went to China (the UK and Canada alone claimed nearly 60% of the total). The less-informed population on the east side of the Pacific will remain fertile ground for demagoguery.

Those million in China had plenty of information about America from movies, TV shows and websites before they ever arrived in the US. But the information can be truncated, stereotypical or shallow, and the government often attempts to “spin” understandings of the US. Being in the US is a far better way for Chinese youths to gain a nuanced perspective.

Such perspectives will help Chinese youths to make changes in their own country. In 2010, Shanghai native Steven Yuan returned home from a two-year MBA program in California. “I used to hear people who had lived overseas talking about how much the experience changed them. They would encourage their family and friends to go, even if not for a degree,” he said. “Now I know fully what they were talking about, and I’ve joined them as a ‘salesman’ for living overseas for a year or two. The more of us that go, the more of us will understand how a stable system works, and the benefits that such a system can bring to people. Therefore, the faster we can develop our country.”

In the US, public universities such as those in the University of California system are facing some of the worst financial pressure they’ve seen in decades. International students pay full tuition, bringing much-needed cash to the institutions.

But an influx of foreign students can create interesting pressures. “We recognize that people from other countries often speak with an accent,” John Webster, director of writing at the University of Washington’s College of Arts and Science, wrote in a New York Times article last February. “If we’re truly going to be a global university, which I think is a terrific thing, we have to recognize that they may write with an accent as well.”

The influx of foreign students can also lead to racial tension, as was famously seen in a YouTube video made by a white undergraduate woman at a California university in March 2011 that was filled with slurs aimed at Asians. The video went viral, and the student felt compelled to withdraw from the university following a barrage of hostile reactions.

Is there any reason to expect this phenomenon, the steady increase of Chinese youngsters headed for education in the US, to end soon? None at all.

The mainland academic environment will be troubled so as long as the Chinese Communist Party controls the Ministry of Education in the current fashion. The percentage of Chinese families who can afford to send their (one) child overseas will continue to rise rapidly, and the perception of the US as a world leader in academia will not change any time soon. A recent article in the Wall Street Journal suggests that a “multiplier effect” will prop up the rate of increase – as more people go to the US for their undergraduate or graduate studies, more will return to “sell” the experience to others, as Steven Yuan suggests.

So US academic institutions face the strategic imperative of either adjusting their environments to accommodate a student body that is up to 20% mainland Chinese, or more aggressively restricting (lucrative) admissions from the mainland.

The Chinese government faces its own strategic challenge: how to accommodate the expectations of a steadily growing percentage of the population that understands the benefits of a stable political system, underpinned by a rule of law.

John D. Van Fleet is Assistant Dean and Executive Director of the Global Executive MBA in Shanghai, a collaboration between Shanghai Jiao Tong University and the University of Southern California. His book, ‘Tales of Old Tokyo,’ will be published by Earnshaw Books this year