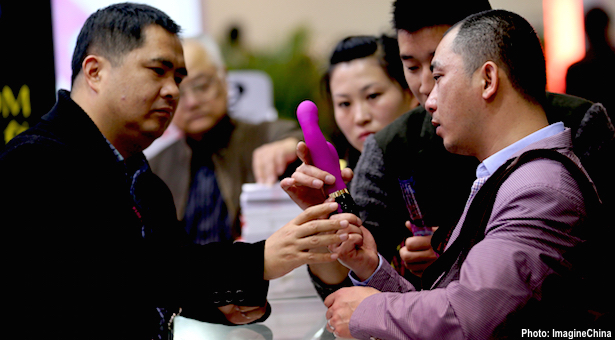 While it obviously happens quite a lot in China, sex is still something of a taboo topic—at least as far as the government is concerned. A ban on pornography is in place, enforced albeit spottily, and as if to fill this niche state media regularly feature salacious photo galleries of women in barely-there bikinis. Late last year, and without a hint of irony, state censors cropped the cleavage from a popular new drama about the powerful Tang dynasty-era empress Wu Zetian.

But putting prudishness aside, China has seized the reins of manufacturing for the global sex toy industry. Reports regularly claim the country manufactures 70% of the world’s sex toys, though it is unclear whence this figure first arose. Steve Thompson, global marketing manager for Swedish toy firm Lelo previously told China Economic Review he thought the figure might be as high as 95%.

Romeo Jiang, the thematically-named general manager at massage-products-turned-sex-toy-manufacturer Bestgreen Electronics, said his firm employed about 100 people and produced around 500-800 varieties of toys, with total production of about 10,000 devices per annum—all for export. He pegged the industry at large as exporting around 80-90% of its goods. Here, as in other electronics sectors, high-end products are sent abroad while crummy, often uncertified toys stay in China, dealing domestic consumers a bum deal.

“Chinese people are still a bit conservative about accepting these kinds of products, and there’s a lack of broad penetration,” Jiang said. However, he added that those born after 1980 were known to dabble, if not wholly embrace the role of toys in the bedroom.

Even with such reticence the domestic industry was growing at a decent clip when last checked. Figures from a 2008 survey cited by mainland newspaper Southern Weekend estimated annual sales at RMB100 million (roughly US$16 million), forecast to grow to nearly RMB300 million by the end of 2014. A more recent survey from 2011 showed most buyers of sex toys in China were men, but most users were women, and average per capita spending that year was RMB1,823 up 30% from the year before.

Industry figures are far more optimistic. In 2012 the chairman of Rainstorm Entertainment, Zhu Weilian, claimed in a Sina Weibo microblog post that adult toy sales in China had already exceeded RMB5 billion, and said he expected them to reach RMB50 billion (about US$8 billion) by 2015. Zhu also expressed disappointment at the industry’s lack of home-grown champions, and encouraged Chinese entrepreneurs to step up to the plate for their country’s sake.

That kind of exhortation, together with optimistic growth forecasts, may have worked too well, according to Jiang. He said that recent years had seen companies pile into the sector expecting quick profits of more than 100%, only to exit just as quickly when revenue was slow to come. “After they came in the dream was shattered—they wanted out, so they cut prices,” Jiang said. “It about killed us.”

Where Chinese producers are apt to jump in blindly, conservative views on sex and discussion thereof can make visiting a sex shop to buy a toy or two a fraught process. (This despite the fact that the first one on the mainland opened in the early 90’s.) But even in top-tier cities sex shops are often grimy holes in the wall whose dimly-lit counters likely do little to enhance their products’ appeal. In fact, more than one in four Chinese consumers who had bought a toy from a physical shop wait until it is dark out to do so, according to survey figures from Daxue Consulting.

Online shopping has lowered barriers to entry for many in China, though: The same poll, from 2013, showed that nearly half of the 17,000 people surveyed preferred purchasing their adult products online. Chris Wu, proprietor of online boutique toy shop TOIs, is starting online and working toward her own brick-and-mortar shop, though she already offers offline parties and bridal showers.

In town for the annual Shanghai Adult Sex Toy Exposition, Wu said it wasn’t just easier to set up shop online—it also provided a less mortifying alternative to the embarrassment many feel when visiting small “health shops” that dot the streets of many major cities in China.

“There’s just more privacy,” Wu said, adding that her own shop would have a good deal more style than the mainland norm. She is already aiming up-market with a storefront that caters to higher-end clientele by offering products from designer European brands, including Sweden’s Lelo (all made, of course, in China).

For all its unease over media portrayals of sex and sexiness, the state recognizes a valuable industry when it sees one. The now annual sex toy expos held in Shanghai, Guangzhou, Wuhan, Macau, Beijing and Fujian are proof enough of this. The CCP seems relatively accepting as well: Before hanging up, Jiang apologized for not having more time to talk, as he had to attend a party meeting.

Jiang said he expected growth in the domestic market as wealthier, younger and more open-minded consumers opened up their pocketbooks—though he suspected the process might take generations. Wu agreed the sector was set to grow, and suggested better education could help sex toys jettison a stigma of being solely for the lonesome.

“Most people think [toys are] only for single person use,” Wu said. Not so, she explained. “That’s why we do lots of workshops.” ♦