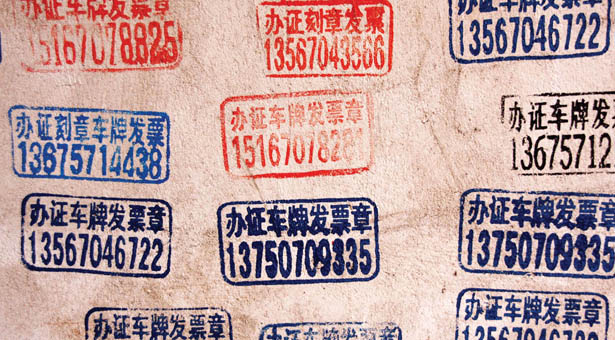 According to many Chinese, while corruption in their country is frequently the target of campaigns and crackdowns, it remains endemic in business and society.

In March, Premier Wen Jiabao called corruption the greatest threat to China’s ruling party. As part of yet another crackdown on graft, authorities have begun to regulate even gift cards, which had become an accepted method of laundering money and giving bribes.

Yet stamping out corruption is not so simple. China Economic Review spoke with foreign and Chinese professionals working at both public and private companies in accounting, procurement, marketing, sales, investment and securities, all of whom avowed that despite official crackdowns, corporate corruption remains widespread in China.

A marketing associate at a European luxury company in Shanghai:

This year an audit team from our European headquarters discovered that our director had violated corporate ethics. He admitted to taking bribes from a local advertising agency and left the company immediately. Shocked as we were, my colleagues and I thought it is fairly common for people in the industry to get certain benefits from suppliers, especially since many foreign luxury brands are relatively young in China and corporate structures are fuzzy, often without an independent procurement department. My colleagues tell me that as long as you are a decision-maker in a company’s marketing department, it’s nearly impossible not to receive benefits in some form from your suppliers. The only variable is the amount of money involved. Normally these incidents aren’t discovered, unless someone reports them because of office politics. Even if the company happens to discover corrupt practices among its employees, there’s no incentive to dig too deep because revelations might hurt the company image. If your choice is between working hard and earning a meager salary or earning 20 times as much by accepting harmless bribes, I can’t image many will resist the temptation. Strictly speaking, I don’t think that taking bribes is a crime. For example, we help recommend friends for jobs and if they get them, our friends will take us out for a meal. The problem lies in the amount of money involved. I don’t think even the best regulation can eradicate the problem of corruption. Every system has its loopholes. If you want people in power to resist bribes, you can only make long-term changes by encouraging education and self-restraint.

Mrs Li, an accountant at a private company:

I have been working as an accountant at three or four companies for several decades. I used to work as an accountant at a state-owned enterprise. The job requirements there were more lax, at least when I was there. Sometimes managers received money or gifts, but they were usually small. If an executive took the money, he would share a little with his staff so we would turn a blind eye to it. Now I am working for a small private company. We have to pay a variety of taxes and undergo lots of inspections, so it is impossible not to give any gifts. We used to give expensive gift cards, but since Beijing issued new restrictions on this we give cards with lower values. Of course none of us want to cook the books, but if your boss asks you there’s really no way to refuse. I used to have an intern working for me; she was nice and smart, but she refused to falsify the accounts and she was eventually fired. Commercial corruption is very difficult to avoid. Bosses feel less secure if they don’t give gifts.

A procurement specialist at a US semiconductor company in Shanghai:

Kickbacks are pretty much taken for granted in China. Wherever there is decision-making power, there is soil for corruption. Some vendors, especially local firms, will even drop a few hints to potential buyers. The situation is usually a bit better in foreign companies. They think it’s not professional, and there are usually some regulations to prevent bribes. In my company, for example, the purchasing department and the sourcing department are independent. Of course, if those in power want to take bribes there are still ample opportunities. Just like in the government, you cannot get promoted if you don’t give or take bribes. This has resulted in a very poisonous business culture where doing the right thing entails a much higher cost. My colleague who used to work in the telecoms industry told me that corruption is so entrenched, even large multinationals like Nokia and Motorola are not innocent. One contract can be worth millions of dollars, and their major clients and suppliers are almost all Chinese firms. In China their corporate culture tends to be more bureaucratic as well. For corporations, it helps to set up an independent internal oversight department. But of course, if everyone believes that corruption is reasonable, no one is going to stick their neck out to report anyone else.

Commercial corruption is prevalent in China, and our company is no exception. A lot of people feel that the situation should be better at multinational corporations – especially a Fortune 500 company like ours where the senior executives are foreigners – but that’s actually not true. I do technical support and cooperate with the sales department a lot, so I’ve seen many corrupt deals. I’ll give you an example: It’s difficult to do business in the first-tier cities, even for Fortune 500 companies, so a lot of sales people go to second- or third-tier cities to look for opportunities. Once a salesperson at our company heard that bidding was underway for a big project in one city out west, so he went to the city to look for the leader in charge of the project. He not only invited the guy out for dinner every day but also gave his wife cosmetic products as gifts and took his whole family – even the old people and the kids – on a trip to Shanghai. Of course, all the fees were recorded in the company accounts under a different name. My company eventually got the contract, probably hundreds of millions of yuan. Multinational corporations now have been almost completely localized. I think it will be very hard for them to find an effective way to manage these situations.

A project manager at a domestic securities company in Shanghai:

I have a friend working at a government anti-corruption bureau, and he told me that there are actually a lot of effective ways to crack down on corruption, but these measures are rarely implemented – maybe because that would hurt the interests of his own company or major industries. Policies can’t cut off the country’s economic lifeline. Corruption is everywhere in China; it’s an unspoken rule in most places. If you don’t abide by these rules when you do business, you will have trouble getting work done. Today, a lot of corruption stories are exposed through [Sina] Weibo because people freely express their opinions online. The Sinopec corruption scandal was exposed by a company insider, and the Maotai case also came out on Weibo. People normally report fraud only if it affects them personally. To be honest, I personally know a few people who have accepted bribes, usually hundreds of thousands of yuan in cash. It is more common at domestic companies than foreign companies, but of course there are still domestic companies that are not corrupt. I think corruption will gradually lessen as new industries develop and regulations and business models improve. I think anti-corruption campaigns will initially be more effective in large cities, while smaller cities just stick to slogans.

An owner of a domestic investment company in Jiangsu:

I know some people who have been involved in corrupt dealings, some taking hundreds of thousands of yuan in the form of bribes and kickbacks. It’s impossible to be totally clean while doing business in China. The situation now seems w
orse than before. It’s a side effect of having a market economy and unlikely to change much. Corporate corruption seems to be more prevalent in private Chinese companies than international ones. Transparency is still an important way to prevent corruption, especially among monopolies. In such industries, corruption most commonly occurs with public relations. It’s rare for people to report fraud, since it’s somewhat linked to Chinese culture. I believe Chinese culture is at the root of our persistent problems with corruption.