Home Business For love or money 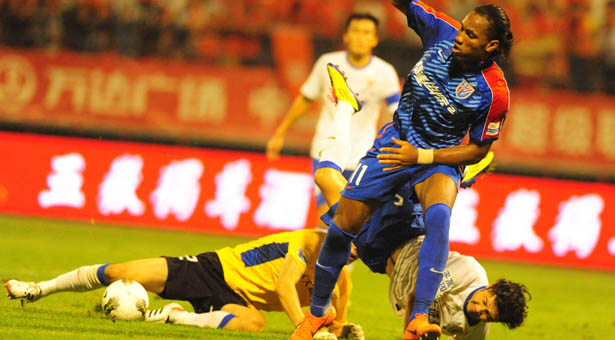 For love or money

Barely over a year ago, China’s professional soccer league was virtually unknown outside of the country and looked upon with considerable disdain by many of those within it.

Plagued by match-fixing scandals and a perceived low quality of play, the domestic league had struggled badly for years. Its inadequacy was mirrored by the national team. The Chinese team qualified for the World Cup only once, in 2002, bowing out in the first round without scoring a goal. In short, Chinese soccer was going nowhere fast, and interest in the game in China was minimal.

But a massive injection of cash into the game has abruptly changed this. A slew of top players from European and South American clubs have joined teams in the Chinese Super League (CSL).

It all started in June 2011, when Guangzhou Evergrande signed Argentine Dario Conca from Brazilian team Fluminense on a massive US$10 million-a-year deal, making him one of the highest-paid players in the world. The 28-year-old midfielder had just won the Brazilian league player of the year two seasons in a row. No foreign player of this caliber had ever played in China before.

The signing did not attract much attention from the soccer world as a whole – Conca was a talent, but he had never played outside South America – but it did raise the bar for the caliber of foreign players joining Chinese clubs.

Suddenly Chinese clubs like Shanghai Shenhua and Guangzhou Evergrande were on the back pages of European newspapers, which had long completely ignored the game in China except to report on corruption or the lamentable performances of the national team. Why the sudden cash injection, they asked, and why did optimism suddenly abound in China?

What most outlets failed to pick up on was that domestic soccer in China had already been on an upwards trajectory, albeit a modest one, since the middle of the last decade.

In 2005, average crowds for CSL matches were around 10,000, but by 2011, thanks to a concerted effort to eliminate graft and improve quality of play, crowds had increased to just under 18,000. This figure is roughly the same as US Major League Soccer or Japan’s J. League, two competitions launched in the mid-90s at the same time as Chinese professional soccer.

An influx of investment showed that businesses recognized this potential. Nike signed a 10-year contract, reported by various Chinese media sources to be worth US$15 million a year, with the CSL in 2010 to supply branded playing kits for all clubs, while Adidas inked a multi-million contract to provide kits for the Chinese national team.

Toshiba sponsored the Chinese FA Cup last year for an undisclosed amount, while Chinese conglomerate Wanda Group and tire multinational Pirelli have sponsored the CSL. And last month, US sports marketer IMG, which helped launch Chinese professional football in 1994, announced its return with a new 10-year deal to promote the CSL.

It’s not only the big boys who can benefit from the upsurge in the game. Langston Smith, who with Oceans Marketing promoted Manchester United’s exhibition match with Shanghai Shenhua in July, said he wouldn’t be surprised if smaller sporting gear companies angle for the commercial Chinese soccer market.

“Nike has the CSL on lockdown with a great 10-year deal. However, the CSL’s new money may help increase the soccer market and smaller brands may position themselves differently in order to take some market share away from Nike/Adidas,” said the Beijing-based sports marketer.

It was partly on the back of this upward investment trend that Evergrande Real Estate bought Guangzhou Pharmaceutical FC in early 2010 for around RMB100 million (US$15.98 million). Evergrande chairman Xu Jiayin, one of China’s richest men, stated his aim of making the team the champion of not only China but also the Asian Champions League.

This massive investment saw the club snap up much of the best talent China has to offer alongside the aforementioned Conca and Barrios, helping Evergrande to win the CSL at a canter last year.

Despite the influx of sponsorship money, it’s clear to anyone taking even a cursory glance over the CSL that the sums just do not add up. Players in China, including Drogba, are now among the highest-paid in the world, even though they play in a league which is nowhere near as well attended, or as commercially developed, as the top European leagues. But the effectiveness of soccer teams as advertising platforms means Chinese companies and wealthy individuals are still happy to invest in loss-making ventures.

“Massive real estate companies, profiting off the jumps in property prices, have made a killing and certain individuals see soccer as a way to raise their profile. The same is true with the local and provincial governments in certain situations,” he said.

Wild East Football’s Chemers agrees the new money will lead to increased business opportunities but warned that soccer still has image problems in China. The Chinese game is riddled with eccentricities which affect the marketability of the sport.

For example, the final round of games last season was played at 3 p.m. on a Wednesday afternoon, when most fans were working. The CSL never offered any official explanation for the bizarre climax, but it was thought the timing was an anti-corruption measure.

What is required most of all to help Chinese football flourish into a mature sports market is a new and sustainable approach to grassroots football. Trevor Lamb, international projects coordinator and coach at Hangzhou-based youth soccer club Sinobal FC said the sport remains undervalued in China by both local authorities and the public, and there is not enough organization at the youth level.

“At football fields open to the public you can sometimes see over a hundred players playing in over 10 overlapping small-sided matches simultaneously. It’s complete chaos,” said Lamb, who puts the problem down to a lack of space in cities for public or commercially operated fields.

“Most Chinese are still not willing to spend lots of money on playing football, or many other sports,” he said. “So while some will spend thousands of renminbi on a new iPhone, they won’t pay a couple of hundred renminbi for a season of regular competitive football and proper gear to play in.”

Many Chinese are also reluctant to spend money on watching the sport, an issue Lamb claims Chinese clubs are ill-prepared to tackle. “Chinese clubs have little awareness of things like corporate social responsibility projects [or having] club officials, players and coaches interact with fans.” Chinese soccer also suffers from the occasional sudden departure of clubs from one city to another, disrupting efforts to build a team’s fan base and culture.

The increasing excitement obscures the fact that China’s love of soccer continues to be limited largely to foreign teams. Big European clubs attract thousands of followers watching online and in the stands when they tour in China. And it’s mainly because of recent imports of big-name, big-money foreign players that this latest wave of interest in the game has arisen.

Avid fans and players of the game in China argue that the country needs to channel this upsurge into increased participation at an
amateur level. Only then will Chinese learn to love their native soccer players and teams a little more and create the foundation on which a mature and established football market can be built.