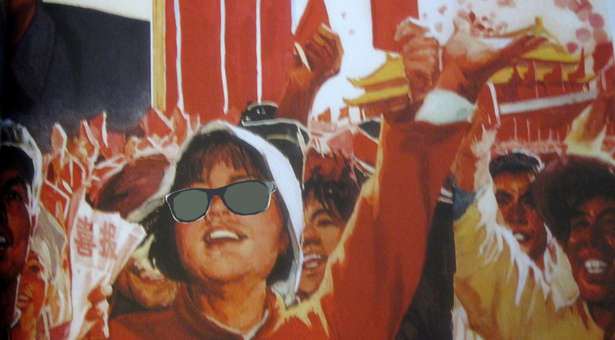 Dark sunglasses similar to those worn by Chen Guangcheng began showing up on unexpected faces shortly after the blind Chinese dissident fled to the US embassy last May. Photoshop aficionados plastered glasses onto KFC’s Colonel Sanders and the portrait of Mao Zedong over Beijing’s Forbidden City, and numerous internet users posted bespectacled images of themselves online. Since the images didn’t employ keywords, censors had a difficult time blocking them.

Twenty years ago, few Chinese would have even heard Chen’s name. Any mention of the rights activist would have been quickly expurgated from any publication that dared to print it. But the expansion of the internet and social media has revolutionized exchanges of information around the world, and China is no exception. China’s online population exploded from only 50 million one decade ago to more than 500 million last year. As of mid-2012, nearly 370 million people were registered users of Sina Weibo, a Chinese service similar to Twitter.

The information age poses a challenge not only to China’s censors, who are struggling to silence the discussion of topics like Chen. Chinese newspapers and magazines, still bound by tight restrictions on what they can write, are also fighting to remain relevant given the fast pace and controversial subjects of online information. These new technologies are creating messy contradictions between the Party-approved journalism and the opinions that proliferate on the internet.

The internet and Sina Weibo have irrevocably complicated the work of censorship. Chinese internet users have found they can stay one step ahead of censors by avoiding certain blocked keywords, instead making allusions to words or images in the banned concept. The most appealing of these inventions become internet memes, popular phrases or images that pop up in ever-mutating forms.

Chen’s dark glasses were one such form of sociopolitical commentary. Another occurred in January, when people around the country professed their love of “southern-style congee,” a homonym for the Chinese name of the Southern Weekly, the newspaper that fought back against censorship restrictions in January.

To combat this gathering wave of non-official information, the propaganda department has been forced to alter its tactics and prioritize amid a gathering wave of online information. Research by Gary King, Jennifer Pan and Margaret Roberts of Harvard University showed that censors focus their energy on Weibo posts that may spark collective action, while leaving alone other, more general criticism of the government.

But although more information is slipping the censors’ nets, the party is also developing more active and effective strategies to deal with this new media environment. “Some people will call it a loosening [of censorship], but it’s not really a loosening – it just changes the nature of the game,” said David Bandurski, editor of the website China Media Project. “It’s an ongoing chess game, if you will.”

One new strategy has been trying to discredit the accuracy of online information. The Chinese government has launched a campaign against rumors, issuing sharply worded statements and publishing editorials in state-run newspapers on the danger of specious online information. The police have even detained and charged people for spreading rumors online.

Meanwhile, the government is using new media to disseminate information, as well as block or alter it. “They’re gradually losing control of information in the sense that information in general is harder to control. But the state has been very smart in adapting to the new situation and maintaining a certain degree of control,” said Ying Zhu, a media scholar and the author of “Two Billion Eyes: The Story of Chinese Central Television.”

For example, the propaganda department pays a team of netizens, dubbed the “wumao dang” or “fifty-cent party,” to seed online conversations with pro-party comments. Government offices and departments are also increasingly using social media to get out information. “New media is becoming one of their management tools,” said Shi Feike, an editorial board member of Southern Metropolis Weekly.

The growth of the internet has also had powerful effects on traditional media organizations, which have been forced to react much faster to keep up with the flurry of online information. In China, that acceleration has helped expand the range of topics media organizations can cover. If an interesting story gains attention online in the hours or days before the propaganda department issues guidelines on how or whether to cover it, Chinese journalists will increasingly view it as fair game.

Fast-moving stories on the internet and weibo now increasingly set the Chinese media agenda. Several major stories of 2011 – for example, the 10-day stand-off between villagers and officials in Wukan, Guangdong province, the environmental protests in Shifang, Sichuan province, or the deadly high-speed train crash outside of Wenzhou, Zhejiang province – first gathered steam online before becoming national and international news. Within a week, however, the propaganda department had made sufficient phone calls and threats to bring reporting on these subjects to heel.

The internet has also expanded the scope of what Chinese journalists can cover by increasing the connections between the information available domestically and abroad. China’s “Great Firewall” system of internet controls is the most comprehensive censorship tool in history, but it is still far from water-tight. “All the big stories about top-level corruption were products of Western media, and because of the internet, their stories get back to China. That’s a development the government in China is very afraid of,” said Minxin Pei, a China scholar at Claremont McKenna College.

The internet, and Weibo in particular, have also raised the stakes for traditional media by facilitating the rise of citizen journalism, in which internet users often work together online to expose corruption or other wrongdoings. Susan Shirk, a professor at the University of California San Diego and the author of “Changing Media, Changing China,” calls citizen journalism “a real challenge to professional journalism. Nowadays, a lot of professional journalists still have constraints in what they can write in their publications.”

In one high-profile incident last year, netizens accumulated photographs of Yang Dacai, a Shaanxi province official, wearing a succession of luxury watches, apparent evidence that he was on the take for more than a meager official salary. “Watch-Wearing Brother,” as internet users came to call Yang, was ultimately ousted from his post for disciplinary violations.

Some  accuse these public-led reports of bringing down journalistic standards and blurring the line between verified information and rumor. There is truth to that: The take-down of Yang Dacai was a best-case example of the investigative power of the internet, while others have led to wrongful victimization and harassment.

Even so, the success of internet users in evading the grips of censors shows that this exponential increase in “unverified” information is an unstoppable force. To the dismay of Chinese censors, the country’s restrictive media environment makes the free-flow of online information all the more powerful.