Home Business March on the Mittelstand 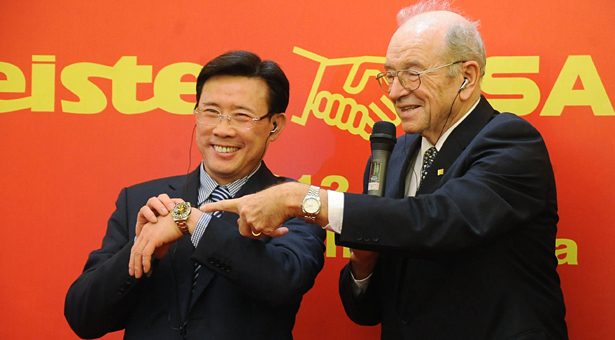 March on the Mittelstand

Aichtal, a small German town of less than 10,000 residents just south of Stuttgard, might not seem an obvious launching pad for Chinese companies looking to expand abroad. But earlier this year Sany, a Chinese construction giant with around 60,000 employees scattered across more than 150 countries, chose to place its global concrete machinery headquarters in the small town.

The decision was part of a package deal. In January Sany agreed to buy Putzmeister, a German concrete pump maker valued at around EUR500 million (US$619 million), the largest takeover of a German company by a Chinese rival to date. To lubricate the deal, Sany not only retained Aichtal as the acquired company’s headquarters but also agreed to keep all German production sites open until 2015 and avoid merger-related layoffs until 2020.

The self-imposed shackles attached to Sany’s bid underscore how jittery many in Germany are about the China’s sudden interest in their companies. Most of the concern has centered not around large companies like Putzmeister, but Germany’s prized “Mittelstand” – small, usually family-owned enterprises that specialize in niche industrial products for export. As of July, Chinese companies had acquired at least 21 Mittelstand firms since the beginning of last year, according to data compiled by Bloomberg, far more than in previous years. Some German politicians and those in the media aver that Chinese companies swoop in vulture-like to the Mittelstand heartland, picking out the weakest companies to snatch advanced technologies for use back in China, while leaving German workers behind.

Such fears may once have had a ring of truth, but those involved in Sino-German mergers and acquisitions (M&A) say Chinese motives are changing. Rather than simply viewing M&A as a means to buy German technology, Chinese companies are now looking to acquire German talent as well.

“I hesitate to say Germany is only willing to sell distressed companies to China,” said Moritz Schenck, a Frankfurt-based partner at KPMG, who works on many Sino-German M&A deals. “You don’t spend half a billion dollars on a company like Putzmeister just to dismantle it.”

Mittelstand companies are widely regarded as the backbone of Germany’s export-oriented economy. Analysts estimate that the country’s 3.7 million Mittelstand companies collectively employ around 70% of the labor force and account for half of total economic output. “One can rightly speak of Germany as an economically strong nation of Mittelstand businesses,” said Marc Tenbieg, head of the trade body Deutscher Mittelstands-Bund.

Yet just how Mittelstand companies continue to thrive is something of a mystery. Low-cost competition from China has decimated manufacturers in other rich countries, particularly small, family-owned operations that cannot achieve economies of scale.

Those in the industry suggest many reasons for their success. Mittelstand companies tend to produce highly specialized or bespoke products where quality is prized, such as gear parts and electrical systems for cars, or concrete pumps for building nuclear plants. They have long-standing relationships with a small group of buyers – such as German auto makers Volkswagen, Audi, Porsche, BMW and Mercedes-Benz – making it tough for upstart competitors to muscle into the market. And they offer superior customer service and after-sale services, which Chinese companies tend to lack.

Perhaps a more important factor in the Mittelstand’s continuing success, however, is that many have already outsourced lower-value parts of the production chain to China, heading off potential competition. “There are segments, like the mid-price volume segment, which can be best addressed by developing and manufacturing products in China,” said Bernd Venohr, a professor of strategic management at the Berlin School of Economics and Law who researches Mittelstand companies.

Between 2008 and 2011 German firms of all sizes invested around EUR25 billion (US$31 billion) into China, according to figures from the Bundesbank. Most Mittelstand investment in particular has focused on “greenfield” projects – building a new factory or opening a new production facility, rather than partnering with Chinese companies, said Schneck of KPMG.

However, China may be less attractive now than it once was. For one, the risk of intellectual property theft remains considerable, especially for manufacturers. “The major obstacle slowing down [investment] by German Mittelstand in China is the never-ending IPR violations and technology theft by Chinese companies,” said Alberto Forchielli, co-founder of Mandarin Capital Partners, a Chinese-European private equity fund. “The Mittelstand I have talked to are obsessed by this problem, because they think they’re not big enough to tackle it.”

Moreover, China’s cost advantage is no longer what it once was. While still far off German levels, wages in China have been climbing at double-digit rates, dulling its competitive edge, said Ilja Nothnagle, Berlin-based director of Foreign Trade at the Association of German Chambers of Industry and Commerce.

Over the past two years a new trend has emerged, as capital flows between the two countries reverse. China registered 158 investment projects in Germany last year, overtaking the US as the largest foreign investor, according to Germany Trade and Invest, the country’s economic development agency. Aside from Putzmeister, other notable takeovers this year include Hebei Lingyun Industrial Group’s purchase of Kiekert, a German auto parts maker, and Xuzhou Construction Machinery Group’s acquisition of Schwing, which competes with Putzmeister on concrete pumps.

In total, Chinese companies invested around EUR184 million (US$228 million) in Germany last year, up more than threefold from 2008. M&A investment rose from a paltry EUR2.75 million (US$3.4 million) in 2004 to EUR41.2 million (US$50 million) in 2010, according to a report by KPMG. That is still much lower than German investment in China, but it is rising much faster, at a compound annual growth rate of around 130%.

At least part of the investment surge may be driven by the opportunity to acquire advanced German operations and high-tech assets on the cheap. Sagging demand from troubled European economies have pushed down prices and driven weak businesses to the brink of bankruptcy. Many Chinese acquisition targets in Germany have been firms that were in distress and had no choice but to accept an outside investor, noted Venohr of the Berlin School of Economics and Law. “Mittelstand companies are usually not for sale,” he said. “Family owners believe in keeping the business in the family and are not willing to sell it.”

They are particularly reticent to accept takeover offers from Chinese rivals, several analysts said. For starters, Chinese companies can be painfully slow negotiators. “European sellers [are] wary of how slow and unpredictable Chinese companies are during the buying process,” said Forchielli of Mandarin Capital Partners. Big Chinese purchasers need approvals from up to five different government agencies: the Ministry of Commerce, the National Development and Reform Commission, the Chinese Securities and Regulatory Commission, the State-owned Assets Supervision and Administrative Commission, and the State Administration of Foreign Exchange.

“They are very slow in decision-making and thus often miss bidding deadlines,” he said. “So if there is competition from US, French or Japanese companies to buy, Germans prefer to sell to those who will pay right away.”

Another reason for the hesitation stems from the inter-cultural issues Chinese companies face running the acquired companies, explained Venohr. “Acquisitions are high-risk in general, and especially in foreign countries,” he said. “Chinese companies need to learn how to successful
ly work with the German subsidiaries and manage international networks.”

Management clashes often come to the fore when the merged company looks to lay off redundant workers. Chinese companies have a particularly sour reputation in this regard, thanks in no small part to Shanghai-based SGSB Group’s takeover of Duerkopp Adler AG in 2005. The well-publicized acquisition was by almost all accounts acrimonious, with sales plunging and around a third of the workforce laid off.

Part of the problem is that in the past many Chinese firms were “merely striving for a quick return of investment,” said Tenbieg of the trade organization Deutscher Mittelstands-Bund. In practice, this often meant myopically going after company assets, while ignoring employees, client relations and service operations.

But the focus now seems to be changing. “Over the last two to three years the Chinese have begun to understand that buying German companies for the technology and then dumping the employees doesn’t work,” said Schenck of KPMG. “Now the Chinese are buying German companies in part for the technology, but also – in large part – to acquire the German global management and sales systems.”

The strategy hints at a more sophisticated understanding of the Mittelstand’s resilience: Not only superior technology, but also talent to manage client relations and provide high-margin after-purchase services. “Part of the German product is the service and knowing that your machine will be fixed and taken care of no matter where you are in the world,” said Nothnagle of the German Chambers of Industry and Commerce. “The Germans [have been] able to compete with the Chinese because of the excellent relationship that the Mittelstand have with their customers.”

Chinese companies are also learning how to better handle the takeover process and market their advantages, said Schenck of KPMG. Pre-takeover reassurances to employees are becoming the norm, as are post-acquisition capital injections – Sany invested around EUR300 million (US$371 million) in Putzmeister a few months after the takeover. Chinese companies also offer greater market access to China, which is critical for companies looking to follow German auto makers shifting production into the world’s biggest auto market. Norbert Scheuch, Putzmeister’s CEO, may not have been exaggerating (too much) when he professed that “Sany was love at first sight.”

While the sun is shining

There is a darker reason, however, that Mittelstand firms may be opening to tie-ups with Chinese companies: Germany’s manufacturing export machine, while impressive so far, may not last forever. Certainly the environment has taken a sharp turn for the worse in recent months, due to softening demand from China and the rest of Europe. “It is getting harder,” acknowledged Nothnagle, though he added that the German companies he works with are optimistic.

Others are less so. “The [Mittelstand] success will end soon with the break up of the euro – it won’t last for more than 12 months and they’ll go under,” predicted Forchielli, of Mandarin Capital Partners.

He added that Chinese companies may currently be waiting in the wings, anticipating that a further slowdown in the market could make Mittelstand companies even cheaper. “The Chinese need to wait,” he said. “And they will have great firesales in Germany.”