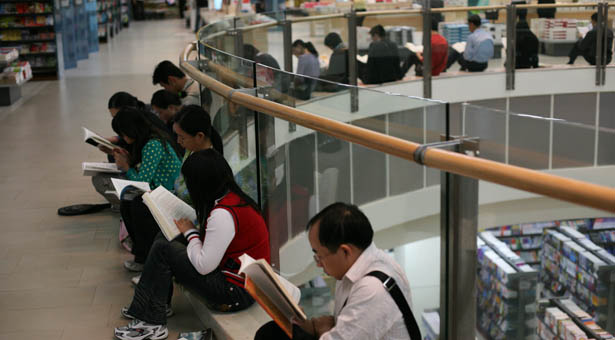 March of the penguin

For decades after China’s economy began to open to the world, the only English books to be had in the country were the smattering of classics that sat largely untouched on the shelves of the Xinhua state bookstore. But in the last five years, English titles on the mainland have proliferated. This is in part due to the entry of big foreign publishers to the market, who partner with local publishers to release English books, Chinese titles and translations of both. In 2011, 7.7 billion books were published in China, making it the largest in the world by volume.

Global publisher Penguin Books has seen China become one of its most important emerging markets since it first established a presence on the mainland in 2005, with sales growing by 120% just last year. China Economic Review spoke with Gabrielle Coyne, CEO of Penguin Group Asia Pacific, on China’s literary appetite and the uncertain course of its publishing industry.

What trends have you seen in the Chinese market in the last few years?

We’re now in our seventh year [in China]. One of the things we’ve been mindful of right from day one is what sort of presence we wanted to have in China. It’s really about developing the right publishing partnerships. Each time I come, there are new Chinese publishers that we’re working with. It’s absolutely about matching the right book or idea with the right local Chinese publisher.

How does the Chinese publishing industry differ from other countries?

There is a sense that this is a real moment for the survival of publishing in China. I don’t feel like that’s [the case] in Australia, the US or the UK. Penguin regards itself as both traditional and digital, and we don’t see digital as a threat. It’s just about how we develop digital capabilities so that people can read where they want to read – be it tablet or mobile phone or any e-reader device. But there seems to be so much uncertainty about digital in China. The second observation that I’d make is that three years ago we felt less confident that the best possible regimes were in place in China to protect the copyright of the author. We talk very openly with [General Administration for Press and Publication] and the minister about our concerns. The copyright regime is now in place, and I certainly feel more confident about the progression into digital, now that we have assurances that the rights of the author will be protected.

How does the battle with digital piracy in China compare to other markets?

That is a concern, certainly. We’ve spent quite a bit of time assessing digital piracy. When we first started the monitoring process about 18 months ago the figures were pretty staggering, especially if you’re an American or British or Australian publisher who does not have a market where piracy of physical books is a concern, like in China or India. But digital piracy is not growing here and there’s a real understanding that the consumer is prepared to pay, and they understand the rights of others broadly speaking. I don’t think [piracy] will ever be completely eliminated from markets such as China. But it’s heartening that the government understands the importance of it.

It seems like foreign books have more difficulty breaking into the China market than other types of media, like foreign movies or TV shows. Is that your experience? What type of foreign book is most successful here?

It’s always risky to become too scientific about the art of publishing. Every day publishers release books on their sense and their editorial understanding that a book will find a reader – and sometimes we’re right and sometimes we’re sadly very wrong. I don’t think that’s different anywhere in the world. Since we’ve been in China, the market for foreign books and Chinese language books has been a young market. When we first started, 80% of the books we were selling were to foreigners, and 20% we were selling to Chinese. That now has virtually flipped. So I think that tells us something about the English language and young, Chinese urban readers.

Are most of the books you’re selling here in English and a minority in Chinese?

With the Chinese [books], we’ve been working with local publishers, so those are their books to sell. That’s a hard one to get the exact answer on, we need to extract the sales information from our partners. And I’m not saying they’re not willing, it’s just a lot of gathering of data. We don’t have that many books in the Chinese language, [compared to] the sheer number of titles that we have in the English language that come to China [through] importers. But that’s just the number of titles; it’s not a measure of readership.

What are your expectations for Penguin’s future in Asia?

Penguin has established markets – the US, UK, Australia, New Zealand, South Africa – and we’re continuing to invest in those markets. And then we’re really focusing on emerging markets – China, Brazil and India, where we’ve been for 25 years. We’ve been [in China] for seven years and we’ll continue to work closely with publishing partners to bring books into Mandarin. I think now is the hardest time ever to think about trends in publishing. History has always been a fantastic record for publishers, but with things changing, and changing so rapidly, it’s difficult to use history as a guide. This is the time we’re least able to speak in absolutes. But I certainly see that our commitment and our work in China, Brazil and India and Korea are very important – because they are markets that will continue to emerge, and emerge fast.

Have you seen books about China become more popular overseas in the last few years?

The first book that Penguin signed was Wolf Totem, when we first started our China operation in 2005. That of course went on to win the Man Asian prize and was sold in Australia, the UK [and] America. We are in the business of identifying the best books possible by the best writers possible, and when thinking about international markets, [we want to ensure] that the books will speak to both markets. We’ve just published in the English language Northern Girls and The Civil Servant’s Notebook.

What are some of your favorite China books or titles you’re looking forward to?

Northern Girls, Sheng Keyi’s book, or Paul French’s Midnight in Peking. I love that book and I love the story behind the book. We’ll be publishing a book by John Garnaut, who is a foreign correspondent in Beijing, a short digital book about the Neil Heywood [murder] case. It’s a case which is so fantastically Shakespearean in many ways.

We have been curious when the Bo Xilai affair would appear in a book, because it has kept evolving. So perhaps everybody is waiting to publish the thick volumes.

That’s why we approached John, because this is the great thing about digital as well – you have it all planned out for when you do the full book. The digital e-book gives you the opportunity to do a quick piece that describes what’s going on without it having come to a final conclusion.