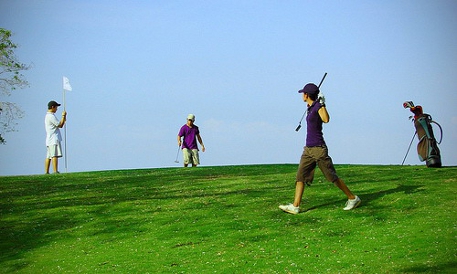 Masters in the making

Golf’s high-brow heritage proved to be its downfall during the Cultural Revolution, when it was eschewed as a symbol of capitalist decadence. Today, however, that reputation is helping it to win many devotees in China. Critics argue that golf is a wasteful pursuit for a country with a scarcity of water and arable land. However, others argue that golf brings myriad benefits: not just fitness, but also culture and discipline.

One proponent is Zhang Yaqin, Deputy Dean at Shenzhen University’s Golf College and a professor of British St. Andrews International Golf Course Management. Zhang spoke with China Economic Review about the rationale for majoring in golf and the need for government intervention in the sport.

Q: What prompted your school to set up a golf management major?

A: Our program was the brainchild of Lin Zuji, our former dean and standing committee director of the Shenzhen Municipal Congress. Lin saw golf’s popularity among business leaders and athletes, and realized that the industry has huge potential in China. Shenzhen is well suited for golf because land is abundant and it was one of the first places to undergo opening and reform. Despite this promising market, the domestic golf industry had always relied on foreign management. So naturally we asked why China couldn’t nurture its own talent.

Q: What are graduates of your program doing now?

A: The college’s primary goal is to groom players, referees and professionals in tournament organization, golf club management and a variety of related industries. But of course, our students have the option to go into other sectors that value golf skills. Banks and insurance companies have recruited our students to market their VIP services, a job that involves playing golf.

Q: What’s your view of the proliferation of golf classes and majors at Chinese universities?

A: Hundreds of new golf programs are being set up across the country. There are reasons for controversy here, but it’s important to note that the industry is still growing rapidly. China’s golf industry is pretty immature, so these professionals will be indispensable in shaping it.

Q: Most Chinese golf courses are built by commercial property developers. Why is golf largely the domain of private companies?

A: It’s a very Chinese practice to attach golf courses to property developments. Chinese people have historically been obsessed with owning property, and developers are seizing the opportunity to offer the wealthy residences that include leisure facilities. That’s different from golf in Scotland, which evolved from a leisure activity for shepherds to a sport for gentlemen and eventually to a popular game for the public. In St. Andrews, most people play golf, and the sport is just dubbed ‘meandering on the lawn.’

Q: What are the biggest problems with existing regulations?

A: The industry lacks clear standards for building golf courses, and there are still gray areas for taxation and management. The government must be more proactive – otherwise, conflicts are inevitable. There’s a lot that the government could do. It has to regulate illegally-constructed courses, for example, but why not turn them into state-run mini-golf courses for the public? It could also create incentives to make this ‘elite sport’ accessible to average people.

Q: You argue that the encouraging the pursuit of golf would have a positive effect on Chinese society. Can you explain that?

A: Golf has a grounding in discipline and culture that makes it the perfect sport for the Chinese public. It embodies a culture of self-discipline – most Chinese people don’t realize that, they just tend to dismiss the sport as a pursuit of the elite.