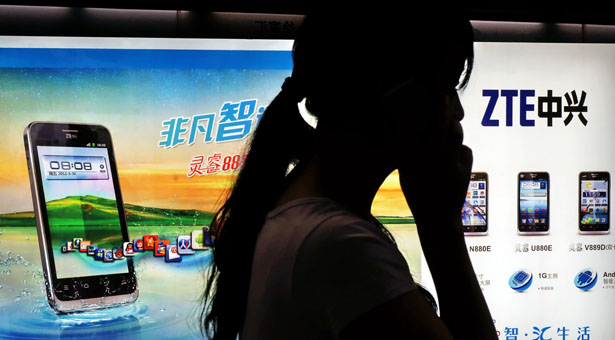 The name of Chinese telecom gear manufacturer ZTE made a rare appearance in the halls of Congress this fall. The US House of Representatives’ intelligence committee warned in an October report released that purchases of ZTE equipment could “undermine core US national-security interests.”

These remarks likely affected what little reputation the company had in the US. But contrary to some reports, they probably failed to dent the company’s earnings, as the US only accounts for 5% of ZTE’s revenue. In fact, the far bigger threat to ZTE’s profits is the firm itself.

ZTE is swerving away from its network business to focus on penetrating the global handset market. So far, this strategy has not only failed to revive its falling profits, it has led to crippling losses. Annual revenue growth fell from 33% during 2007-2009 to 8% between 2009 and 2011, with a massive US$300 million loss in the third quarter. The step also re-routes the firm into an industry packed with aggressive combatants. In an arena where pricing is key, ZTE’s future profitability is now precariously balanced on its ability to increase its margins.

ZTE has been in hot pursuit of the handset business since 2008, when growth in the network equipment portion of its operations started falling away as global network carriers, wary of economic instability, began reducing the capital they committed to networks. ZTE aims to generate 50% of its revenue from its handheld device business by 2015, compared to 31% in 2011.

Some analysts argue that ZTE is positioned to rebuild its crumbling profits. Goldman Sachs Group predicts the company will take a 30% share in the construction of China’s 6th phase TD-SCDMA network, which will drive revenue growth. But this analysis seems wrong. Spending by carriers on this more advanced system only replaces spending on GSM, the slower network that TD-SCDMA will supersede, so the deal will not generate much, if any, new revenue.

Also in support of ZTE are those who believe the company has already hit the bottom. Bank of America Merrill Lynch, for example, calculates that the company recorded the majority of costs from its previous low-margin handset contracts in the third quarter. As a result, ZTE is now in a position to pull back from the precipice and enjoy profits in 2013, the bank said.

These costs may have dampened ZTE’s earnings in the third quarter, but future profits will still be hard-won. A closer look at the firm’s full-year 2011 earnings reveals that non-core parts of ZTE’s business grew to account for 70% of its profits in 2011 from 11% in 2007, meaning that its core business, the sale of network and handsets, is less profitable than headline figures might initially suggest.

ZTE announced September 21 that it had sold its surveillance equipment unit, Shenzhen ZTE Special Equipment. Proceeds from the sale, estimated at up to US$70.62 million, will further cloud ZTE’s real earning capacity when they are recorded. A substantial portion of ZTE’s 2012 profits will be a byproduct of restructuring, rather than healthy growth in the company’s core business.

New earnings will also be hard to wring out of an industry that is increasingly saturated with competitors. ZTE has to duel middle-end manufacturers such as well-established LG Electronics and HTC for a share of the middle of the market, while large groups of lower-tier challengers such as Huawei and independent small vendors, known as “white box” players, leave the company with increasingly less room to maneuver.

Even if ZTE achieves its market share aspirations, profits will not necessarily follow. Although China edged past the US as the biggest smartphone market in the world in the second half of 2012, it also features some of the world’s lowest margins per handset as white box players slug it out on price, diluting profits. ZTE’s sales may have grown, but with margins floating around 18% for handsets and the need to cover hefty marketing and R&D expenses, the firm is struggling to break even. In comparison, Apple makes margins of 49-58% on its iPhone sales in the US, a figure which implies enough revenue to cover all costs and turn a profit.

HSBC analysts predicted in October that even if ZTE gobbles a larger market share, “the smartphone story will [not] drive margin expansion recovery for several years and [we] don’t believe ZTE’s management is particularly focused on minority shareholder concerns.”

Given its increasingly poor core-business profits and the lack of signs that its swivel to the handset market will pay off, investors in ZTE should be aware that they are unlikely to reap rewards from their investment in the near future. The company’s share price has declined steadily over the last two years, from HK$29 in early 2010 to HK$13.72 in January.  As ZTE continues with a strategy that so far appears to be undermining its own interests, it may be time to disconnect.