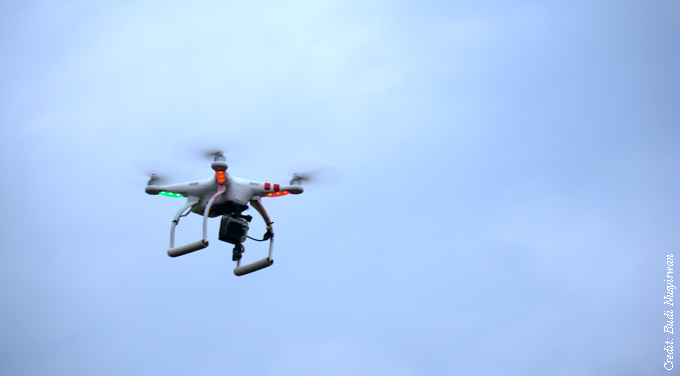 Drones have flown into public view in China in the past fortnight as weapons in the war on pollution. The environment ministry recently employed drone-mounted infrared cameras to monitor and collect data on industrial polluters in the north of the country.

This is just one example of the growing number of non-military applications for drones domestically. Increasingly, these unmanned aerial vehicles are being used for commercial purposes in fields including aerial photography, video and even logistics. According to some estimates, the market for commercial drones is now worth a few hundred million renminbi annually and growing fast.

But Chinese companies are not only buying drones: They are designing and producing commercial units for sale at home and abroad. Yet despite entrepreneurs showing a knack for drone production, design and commercial application, government regulations and market forces may forestall a quick takeoff for an industry that is rapidly capturing the attention of the business world.

In June spying drones swept through the airspace of three provinces home to major steel and coal-mining industries on patrol for polluters. Roughly a quarter of the firms had exceeded air pollution limits according to an announcement from the Ministry of Environmental Protection. Hebei Iron & Steel Group, the country’s top steel producer, was named and shamed for egregious emissions.

Government ministries aren’t the only ones with eyes in the skies. Drones, many of them designed by Chinese entrepreneurs, have begun to dot the airspace above China’s cities and countryside to capture airborne vistas on film where only heavily regulated helicopters once hovered. MF Vision, a Shanghai-based company specializing in remote-control aerial photography and videography, boasts clients including the BBC, Fuji TV and a number of Chinese provincial and municipal television stations.

Many drone fleets increasingly include craft designed and produced by two companies from South China, XAircraft and DJI Innovations. Their growing successes at home and abroad are signs that local firms have the chops to thrive in this booming field within the commercial drone sector.

Director of Guangzhou-based XAircraft, Justin Gong, shoots footage for the Phoenix TV news network using a drone of his company’s own design. Gong claimed in a media interview that his company could sell 350 units in China a day. Given that the cheapest model offered on XAircraft’s Taobao store is priced at about RMB3,000 (US$485), that’s a potential RMB1.05 million in daily sales.

Meanwhile, Shenzhen-based DJI Innovations’ Phantom Vision 2 has become an industry darling in the US. Small enough to hold with one hand and simple to start up out of the box, it has garnered seemingly universal praise from drone and photography enthusiasts, and lowers the bar to entry for aerial imagery still further with smartphone compatibility. DJI “is in the first wave of 21st century Chinese companies that we are all going to be dealing with,” the CEO of one industry rival recently told Bloomberg Businessweek. “They are executing flawlessly.”

While commercial drones are currently mostly used to shoot photos and video, enterprising delivery companies have been trying out aerial craft in a bid to find solutions to China’s logistical bottlenecks. If allowed to develop, this could be the big trigger for growth in commercial drones.

The country is the world’s largest e-commerce market, with 302 million online shoppers and a transaction volume of RMB1.85 trillion in 2013, according to an official from the commerce ministry. Estimates suggest internet sales could top RMB4.2 trillion by 2020. SF Express, the biggest delivery firm in China, last September tested an aerial delivery drone in the city of Dongguan. An upscale bakery in Shanghai even sought last year to deliver cakes by air.

But as so often with emerging technologies in China, companies move more quickly than regulators, who instinctively slam on the breaks when faced with uncertainty. The bakery’s test was halted by local authorities; unmanned aircraft had to be approved by the civil aviation authority before being used for business, they said. Zhang Qizhun, director of the aviation law committee of the Beijing Bar association, told South China Morning Post last August that civilian drones “face very strict regulations on the mainland. Anything that flies, like hot air balloons or drones, must have official permission.”

This shutdown hints at the challenges facing commercial drone use in China, and how officials might use the regulatory tools at their disposal to impose control. A lack of explicit regulations on drone operations doesn’t help either. Until clear guidelines are in place drone operators will be at the mercy of the same authority that governs everything else that flies beneath the 1,000-meter mark in low-altitude airspace: The Civil Aviation Administration of China. In theory at least, all drone flights require advance approval from the authorities. The CAAC isn’t known for updating its rules quickly.

While rule enforcement so far has been relatively ad hoc, security concerns will likely dispel any dreams of packages whizzing through China’s skies – particularly in Beijing. Political and national security concerns make the city’s downtown a virtual no-fly zone, as a New Zealand photographer discovered recently when flying a drone in the vicinity of Zhongnanhai. DJI Innovations has even pre-installed software on its drones that prevent flights within 15 kilometers of Tiananmen Square.

Domestic security concerns aren’t the only factor that might ground courier companies’ hopes of integrating drones into the broader logistics business. Current drone tech is built for peeping, not parcels. Models similar to the one seen in photos of SF Express test runs have an advertised carrying capacity of 5-11kg, and only run for about 15 minutes, though operation time varies from drone to drone. In contrast, the same-day delivery cost at SF Express this week for a five-pound package shipped from northwestern Beijing’s Haidian district to its East City district – a rough simulacrum of drone delivery distance – was RMB19.