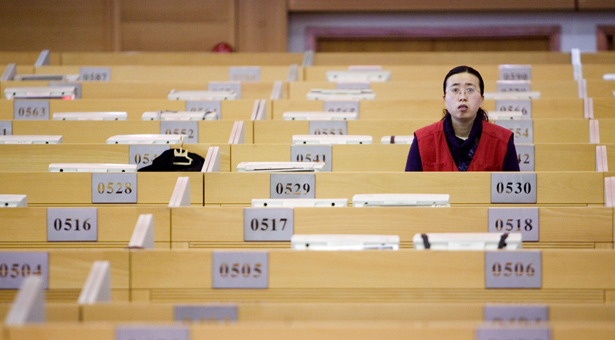 Small and medium enterprises just can’t catch a break. Outgoing Premier Wen Jiabao and other officials certainly talk about making it easier for SMEs to get loans. But apart from launching a small trial lending program in Wenzhou in March, Beijing has done little to advance their interests. Bank loans remain overwhelmingly reserved for state-owned enterprises.

To fill this financing gap, SMEs have increasingly turned to private equity during the last decade. Private equity funds would commonly take minority stakes in still-developing Chinese companies in exchange for providing funding. Fund managers then help guide the company through an initial public offering (IPO) that raises more money and gives the fund a chance to offload its investment. Strong demand has helped the industry expand rapidly: 6,035 private equity and venture capital firms were active in China at the end of the third quarter, a more than tenfold increase since 2005, according to research firm Zero2IPO.

But weak domestic stock markets and flagging investor appetite for new issuances this year have largely put an end to this type of “pre-IPO” financing. With the Shanghai stock market at a more than three-year low, PE firms can no longer reap big gains by taking just any SME public. The sector must now search for a new model to replace the IPO cash cow.

“Enterprises which are mature, flawless and can float quickly are quite rare now,” said an insider at a state-backed private equity firm, who asked to remain anonymous because he was not authorized to speak to the media. “The period when you ‘drain the pond to get all the fish’ is over.”

The woes that China’s private equity firms are now experiencing stem from the industry’s unique development. In the West, private equity generally involves mergers and acquisitions; a PE firm buys a controlling stake in a business, revamps the company and then merges it with a larger company. Before the mid-2000s, private equity firms in China could only raise money in US dollars and thus adhered more to this Western model.

But a combination of looser investor preferences and regulations led Chinese PE firms to rely more heavily on IPOs to exit their investments. Regulators first allowed domestic firms to raise money in renminbi in 2006, with similar rules being issued for foreign firms in 2009. Given this new source of capital, the total value of mainland private equity investments jumped from US$3.7 billion in 2005 to US$15.2 billion in 2011, by which time 68% of funds were raised in renminbi, according to consultancy Bain & Company.

To raise renminbi, PE firms had to tailor funds to local preferences. One step was shortening the average life of a fund to three to five years, rather than the seven to 10 years typical in the US.

IPOs provided quicker exits than finding corporate buyers, and the soaring Chinese stock market of the last decade made listing companies easy and highly profitable. Thus, IPO exits skyrocketed: According to Bain & Company, 66% of all private equity investments in China in 2011 were exited through IPOs, compared to less than one-quarter of exits by deal value worldwide.

Too good to be true

But the pre-IPO model hinged on the erroneous assumption that stock markets would continue to rise. Private equity firms were buying into companies at already-high price-to-earnings ratios – a common metric for valuing a company’s stock – confident that they could unload the shares at an even higher price during the IPO, said James O’Neill, managing director of Jin Niu Investment Management. At such high P/E ratios, “if the market pulls back, you don’t have much room for error,” he said.

The stock market has done just that. The Shanghai exchange delivered one of the world’s worst performances this year, leaving small enterprises with little hope of commanding high IPO valuations.

Besides public offerings, private equity funds have few other options to exit their investments. Most funds generally hold only minority stakes because the first-generation entrepreneurs now at the helm of many Chinese companies are reluctant to give up control. Without a controlling stake, PE funds cannot force entrepreneurs to sell or merge their companies, a common exit strategy for funds in the West. “We’ve met with lots of these [entrepreneurs] and the phrase they use is ‘I’m not selling my company – that’s like selling my child,’” O’Neill said.

Entrepreneurs with majority stakes can easily ignore the plight of PE firms stuck with their investment, said Alberto Forchielli, Shanghai-based managing partner of Mandarin Capital Partners. “Once the [IPO] doesn’t happen, the entrepreneur says, ‘Why did I need you in the first place?’”

Marooned PE firms have a few bad options. They can sit on investments and concede losses, use extra money in their funds to offer shorter-term conventional loans in hopes of offsetting the loss or sometimes convince the entrepreneur to sell, Forchielli said.

But changing strategies also comes at a cost to investors. “Time is the enemy of the [rate of return],” O’Neill said. “If all of a sudden you thought you’d be out in three years, now it may be five, that suddenly makes an investment very uneconomic [sic].”

The exact impact on PE funds is difficult to discern, because funds are reluctant to disclose money-losing investments. But Lin Wantin, a research manager at Zero2IPO, expects some Chinese PE firms to go out of business before 2015, by which time the market should stabilize, she said.

The PE firms that remain will be warier of investments without a sure-fire exit strategy. The impact is already clear: In 2012, only 352 companies in China reported relying on private equity for funding, compared with 1,101 firms in 2011, according to a report by consultancy Z-Ben Advisors.

The painful slump in IPO activity has convinced many in the PE industry that they need to develop other methods to exit their investments. Some PE firms are finding other investors to buy their minority stakes second hand, though they are likely losing money in the process, said Yong Kwek Ping, CEO of Inventis Investment Holdings.

Mergers and acquisitions seem the likeliest channel for future exits, despite Chinese business owners’ trepidations about giving up control. Luckily for PE firms, many first-generation Chinese entrepreneurs are reaching retirement age. “The founder hands [the company] off to the son and the son doesn’t have that personal emotional investment in the company” and therefore may sell, O’Neill said. Other entrepreneurs may give up majority stakes so long as they can continue managing their company.

To deliver competitive returns to investors, private equity firms will also have to bring more value to companies, rather than just money. For example, Shanghai-based PE firm Lunar Capital helps the beverage, food and clothing companies it invests in to improve operations, according to managing partner Derek Sulger. That allows Lunar to turn around and sell those companies for more.

This M&A-driven model of private equity investment exists in China, but it is just not as popular as the pre-IPO model, said Yong of Inventis. The PE firms that follow this more Western approach to private equity – investing in mid-stage companies and finding larger companies to buy them – are performing well, Yong said. For example, foreign heavyweight Carlyle Group sold its 40% stake in a Chinese chemical company to Sinochem International in August, d
oubling its initial investment in four years.

Ultimately, PE firms will need to be more selective to find companies suitable for M&A or the now-narrower path to IPOs, said Chris Lerner, head of the China practice for Eaton Partners. Cautious investors will likely pull back on their future private equity investments as they wait to see how the industry develops, he said.

Small and medium Chinese companies will find it more difficult to find funding as they confront a private equity industry with less cash and stricter standards for investment. But so long as financing for small firms remains tight, private equity will be spoiled for investment options in the mainland.