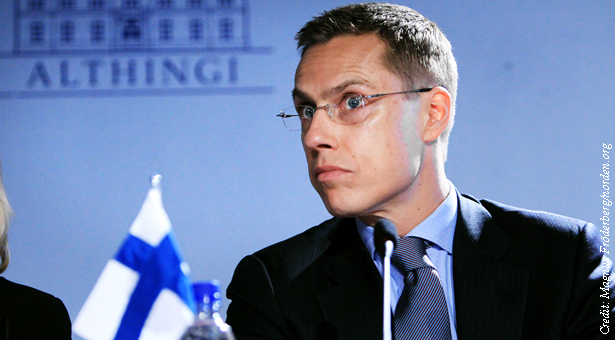 Obstacles remain to greater investment between China and Europe, including pending investment protection agreements and intellectual property protections, said Alexander Stubb, Finland’s Minister of European Affairs and Foreign Trade. “There’s a lot of work to be done,” he said. The eurozone crisis in general has been “exaggerated,” according to the former member of the European Parliament.

Stubb also touched on lacking intellectual property protection in the world’s second-largest economy, potential Chinese security threats in the telecom sector and China’s involvement in Arctic development in the interview, which took place during an official trade delegation visit to the city of Kunshan near Shanghai.

Finnish companies share the concern of many around the globe that poor protection against intellectual property theft in China may put them at risk when partnering with Chinese companies. “The fear is dissolving” among Finnish companies, Stubb said. He acknowledged that there have been some intellectual property rights conflicts in the past, but most of them have been resolved. A Finnish company must nevertheless “do its homework” before and after it gets to China.

Stubb downplayed the possibility of a Chinese company coming to the rescue of ailing Finnish phone maker Nokia. Stubb said Nokia was unlikely to be acquired by a leading Chinese mobile producer such as Huawei Technologies or ZTE because Nokia has revenue beyond smartphones. Although Nokia has fallen behind in the Chinese phone market after an initial strong performance, Stubb said he is not overly concerned with the health of the company.

Finland has taken a more open stance toward Chinese telecom products and investment on its soil, standing in stark contrast to US actions taken to limit the potential security threat from Chinese telecom products. Huawei announced in December that it would invest EUR70 million in a smartphone development center in Helsinki. “I wouldn’t call [Huawei] a mega-threat, that’s for sure” said Stubb regarding the US stance that Huawei may present a national security threat but declined to comment on the exact risks the Chinese telecom may pose.

The minister skirted the issue of a Chinese push for greater involvement in potential Arctic development, calling them “involved observers.” The Arctic potentially holds vast amounts of natural gas and other resources. “I can certainly see why China is interested,” Stubb said. “It’s a question of economy, it’s a question of energy and, in many ways, it’s a question of security as well. And the more peacefully China can be involved in this development I think the better off all of us are.”

China is very active with the Arctic Council, an intergovernmental agency consisting of seven countries with territory in or adjacent to the Arctic region, including Norway, Canada, the US, Finland and others. The council will vote on whether to give China official observer status at a meeting in May. Stubb declined to forecast China’s long-term plans regarding the council, but noted that since it’s “not an Arctic country, it will probably wind up with a slightly different role” than its members.