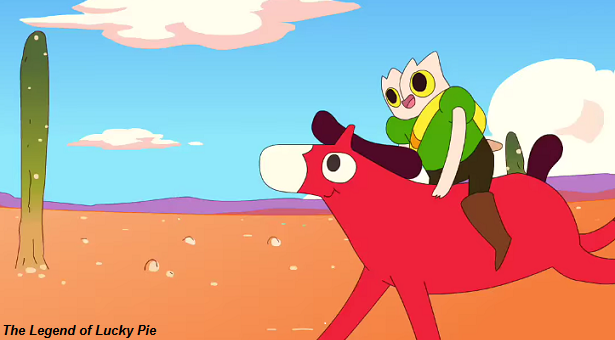 Before they began raising eyebrows in western animation circles with their latest collaboration, Tim Chen and his friend had worked together on a previous independent cartoon.

“Yi Mumu and I collaborated on an independent animation, Conviction of Distance, about a long-distance relationship,” Chen said. “Since I was in a long distance relationship at the time I asked Yi Mumu to help me make it, and you could say it was an engagement present for my wife, too.”

When that made waves among domestic viewers online, Chen and Yi decided to try their hands at a series: The Legend of Lucky Pie. The two paid for production costs themselves by working day jobs and animating at night. Once the eleven-minute short about the adventures of a horse and his boy went live on Chinese video sites, the cartoon soon made its way over the Great Firewall to viewers on YouTube. But there it was posted under the title “Adventure Time‘s Chinese Knock Off”.

That label cuts to the heart of the challenges that continue to confront China’s animation industry, even as its production capability and technical qualities improve. With thousands of animation companies and hundreds of thousands employed the industry is becoming notable simply by nature of its size. But not all of that numerical might is put to good use, and for most studios quality storytelling remains elusive. As major corporations begin to throw their weight behind studios they hope will become Chinese Disneys and Pixars, domestic viewers remain skeptical.

“There could be a substantial boom” in China’s animation sector said Michael Keane, a professor, member of Queensland University of Technology’s creative industries faculty and author of an upcoming book on creative industries in Chinese television and film. “In China the market’s so big they could manage to get it right—if the government gave them a bit more space they could have a breakthrough. But the audience… they’re very prejudiced against domestic animation, so you’ve got to get over that hurdle to start with.”

Of quantity and quality

China’s animation sector wasn’t always stuck playing catch-up. During the Japanese occupation of Shanghai the Wan Brothers produced Asia’s first feature-length animated film, Princess Iron Fan, released in 1941. Their next major release, Uproar in Heaven, was screened in full for the first time in 1965, shortly before the Cultural Revolution shoved the whole industry into mothballs.

Today among the most referenced sources for animation industry figures is the annual state-produced blue book known as the “Chinese Culture Brand Development Report”. Begun in 2003, the latest edition from July of last year covers developments in 2013, and claims that the mainland had a total of 4,600 animation companies with a workforce of 220,000. Exports have also risen in recent years, according to government figures.

But those numbers don’t reflect the nature of the work being done. “Seventy percent of the animation companies in China—it’s probably more, but this is the official figure—do outsourcing, and they do it because that’s how they survive,” Keane said.

Figures released at an industry expo in July said the industry generaed RMB87 billion (US$14 billion) in 2013 according a dispatch from The Hollywood Reporter. However, the only revenue figures provided in the latest blue book are from 2012, when operating revenue for 519 mainland animation companies totaled RMB5.63 billion and total profits came to RMB850 million. But government subsidies accounted for 42.35% of profits (about RMB359.975 million), leaving only RMB490.025 million of actual profit for the industry.

That’s just shy of US$78 million generated in total by over 500 animation studios. For comparison, in 2013 Japan’s Toei Animation made US$336 million, while DreamWorks Animation SKG brought in US$706 million. Disney Animation is not broken out from its parent company in annual reports, but Frozen alone made US$1.27 billion at the global box office.

While DreamWorks Animation faces trouble at home, having announced layoffs for 500 employees earlier this year and cutting its annual movie release rate to two films, the studio and its Chinese unit may yet be buoyed by news that its third Kung Fu Panda movie received co-production status in China, according to a recent article from the Reporter. That means the movie, whose previous two installments grossed US$26 million and US$92 million in China, will be treated as a domestic release, with greater access to the mainland’s growing number of theaters and a bigger share in box office revenue.

Assuming a box office take in line with previous showings from the franchise, Kung Fu Panda 3 will be one of the few regulatory success stories in China’s animation industry. Stefanie Zhang, resident producer for mainland China with children’s animation studio Little Airplane Productions and a former animation consultant to Chinese animation companies, said that the government’s drive to build up China’s animation industry had resulted in industrial parks and subsidies that undermined creativity and quality.

“The government has subsidies for all kinds of animation productions, which is very terrible, because the more you produce the more money you will get,” Zhang said. When she came to the mainland after leaving a civil service post in Taiwan, Zhang said she found local production houses taking RMB1,000 (about US$160) subsidies from the government for each minute of animation they made. She estimated most spent only around RMB300 of that on production, pocketing the rest.

That’s probably not the attitude the government hoped for when it banned Japanese and other foreign cartoons from airing during primetime on the mainland to guarantee a space for domestic animation. That originally meant 5-8 pm in 2006, but regulators extended the ban till 9 pm in 2008. (Such cartoons can, of course, be viewed any time online.) Other ineffective attempts to curtail foreign animation’s popularity include calls last year from three newspapers in Chengdu for patriotic readers to boycott the iconic Japanese cartoon character Doraemon, a tubby, blue, earless cat from the future whose popularity throughout East Asia rivals that of Mickey Mouse.

Numbers drummed up for the latest blue book detailing the runtime of animation produced annually in China point to additional alarming inefficiencies. In 2013 the collective runtime for the 358 completed animation projects was 204,732 minutes, but that only accounts for what was finished; including unfinished animation bumps those numbers up to 465 projects and 327,955 minutes. That’s around 5,465 hours of animation for the year, with about 85 days’ worth of extra runtime.

Figures for animated features in 2013 show a similar divergence: Of the 84 animated movies produced by domestic companies, only 29 were actually completed. Of those, just 25 were publicly screened, and two of those were co-produced with foreign studios. The seven remaining films screened that year were imported. Actual annual box office revenue was RMB591 million (roughly US$96.3 million) for all 33 animated features shown in theaters.

This apparent waste of time, energy, talent and government funding is perfectly logical in the context of the goals set for China’s animation industry by the Ministry of Culture’s 12th five-year plan for 2011-2015. One of the key development objectives is for the country to produce 5,000 hours of animated content and 30 animated films every year. But while those standards may include helping the domestic animation industry to “go global”, the only times that innovation and quality are mentioned is in the service of a more important pursuit: profit.

Zhang said that domestic animation quotas for primetime television in China also provided a guaranteed outlet for low-quality cartoons. That space has been most successfully filled by local franchises like Pleasant Goat and Boonie Bears, which are provided free for syndication on stations across the nation in order to build up brand recognition. Most of these shows’ actual revenue then comes from merchandising—from toys to clothes to teacups.

The recent surge of interest in China’s animation has come in part from increased investment by China’s increasingly diversified Internet giants, who hope to both host and produce the future content of the country’s entertainment industry. Among the more buzzworthy moves was the decision by Baidu’s Robin Li to throw his support behind a Chinese-Korean duo of auteurs calling themselves Aquamen. That studio is currently producing a $40 million animated film, Kong.

Meanwhile George Wang, founder of the Chinese video site Tudou, opened Light Chaser Animation Studios last year with aspirations to make it into a home-grown animation champion. The company’s first animated short played well online on the mainland, but took plenty of heat for the similarities of its characters and their antics to the toyetic minions from the Despicable Me franchise.

“Technically they’re good, I have no doubts about that,” said Keane. “But to be able to be creative in the same way that someone at Pixar, it’s best for a Chinese person to just go and work for Pixar.” He added that another serious millstone around the industry’s neck was that many in China—including government regulators, who can reject a project’s script at the outset—still viewed cartoons solely as children’s entertainment.

“The government said ‘you make animation for a child audience and you instill values into them about how to be a good socialist kiddo’, and so they haven’t been able to get past that, really,” Keane said. “They haven’t found their mojo, they haven’t found what they do… and if they find the right blend of traditional and contemporary without pushing it in people’s faces, the audience might wake up.”

Tim Chen, the producer of the alleged Adventure Time knock off Lucky Pie, is hoping to do just that. Chen said he’d grown up on Japanese, American and European cartoons and remembered being touched by the stories and characters he saw. “But when I watch this generation of kids’ cartoons, I always feel like they’re lacking in some ways, and I hope the stuff we make can fix that,” he said.

For both Chen and director Yi Mumu, the initial branding of their work as a knock off seemed ominous at first. But Chen said he would leave that judgment call to viewers, who seem to have warmed to the short after the initial hysteria. “Who’d have figured that after two days about 80% of American netizens were actually praising the quality [in comments], and some animation blogs were giving positive evaluations.”

Yi and Chen hadn’t managed to find any investors yet—the two are actually living with Yi’s parents while they work on the new series, and progress has been slow since they can’t afford to hire help. But Chen seemed confident they could strike a balance between Chinese and international styles that could set Lucky Pie apart from its peers, and on its own terms.

“As Legend of Lucky Pie becomes serialized you’ll see that within this style we’re trying to add a lot of Chinese elements,” he said. “We’ve already plotted out dozens of episode scripts, in those there’s stories with a lot of Chinese tradition and values.”

In the meantime they can take heart that even Tom Wolfhard, a storyboard artist and writer at Adventure Time, has tweeted his approval: “I want to know if we’re allowed to knock IT off for adventure time. I love it.” ♦