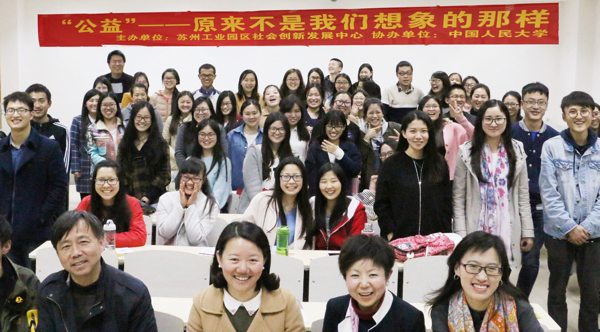 Researchers Huan Chen, Juelin Yin and Florian Kohlbacher from the International Business School Suzhou (IBSS) at Xi’an Jiaotong-Liverpool University (XJTLU) in Suzhou explain why and how the idea of “social enterprise” is beginning to gain some traction in China.

Tao Mei is a former executive of a listed company who several years ago resigned his job to take care of his young daughter and has now returned to the wider world by starting a business in the children education sector.

He’s not the only person in the New China to be forging an innovative path to financial independence by founding a “social business”, that is one which makes money at the same time as helping society in some way, a combination of commerce and charity.

“Premier Li (Keqiang) encourages entrepreneurship and the favorable business climate gives me more confidence on the cause,” Tao said. “I think it is the right time for me to share my child-rearing experience and to help more parents.”

Driven by government policy stimulus, “entrepreneurship” and “innovation” have entered the vocabulary of China’s economic and social development. The National Development and Reform Commission has reported a surge in entrepreneurship with newly-registered enterprises in 2015 exceeding 10,000 per day on average.

The British government defines a social enterprise as “a business with primary social objectives whose surpluses are principally reinvested for that purpose in the business or community”. The European Commission sees its key characteristics as “social and societal purpose combined with an entrepreneurial spirit of the private sector”. The Social Enterprise Alliance in the US, meanwhile, suggests using the formulation that the term covers “methods and disciplines of business and the power of the marketplace to advance their social, environmental and human justice agendas”.

So there is no consensus on the scope and meaning of “social enterprise”, but creating social value is widely acknowledged as the raison d’être while addressing economic needs provides a means of sustaining operations.

Though it started late, social enterprises in China are already active in various sectors and carrying on different social responsibilities, from helping to reduce poverty, unemployment and environment pollution to promoting education, healthy lifestyles and fair trade.

Examples include Canyou (残友) based in Shenzhen, a high-tech company offering training and job positions to disabled people, and Qiang Embroidery (羌绣), a support center built after the Wenchuan earthquake of 2008 to help local farmers improve living conditions by selling their distinctive “Qiang” embroideries.

To make profit or not

Social enterprise, on the one hand, is perceived as an innovative way to tackle social issues, and on the other hand, it raises divergent views. With a dual focus on concurrent social works and economic value creation, some argue that a substantial mission drift could result as organizations are forced to sacrifice social goals for financial stability. Others, meanwhile, suggest that business activities are strategic approaches to raise funds for social goals and more reserves bring more independence.

It isn’t only the blending of value and goals that causes controversy. The institutional ambiguity of organizational forms in social entrepreneurial ventures also affects public perceptions.

Too early to consider both.

“In the initial phase, we are understaffed and underfinanced, and if we consider profit and our services at the same time, we will be overwhelmed,” he said.

Mofei Creativity, which organizes activities involving DIY and the reuse of waste materials to raise children’s awareness of environment protection, is a social enterprise that puts social values first.

“Doing social good is the first step,” said Ms. Di Wang, founder of Go Sports (动起来), an organization that offers free courses like square dancing, cheer aerobics and yoga to neighborhoods, in the belief that such services to the community will bring sustainable funding in the long term.

“Valuable community service with a positive social impact will ultimately be recognized and rewarded with grants, donations and cooperation opportunities,” she said.

Ms. Fang Lv is an advocate for Wiser ball, a team sport, through her registered private non-enterprise Seven Stars (七颗星). But she is worried about losing participants.

“Chinese people like free services,” she said. “If we charge fees, they will think we are not purely social-oriented and they will not come.”

Pursue at the same time

In contrast, some social entrepreneurs suggest that pursuing dual goals is mutually supportive. Mr. Wei Shi, director of On the Road (在路上), shared his views of “paid public benefits”.

“Free service causes waste of resources, and often times people registered for our events don’t even show up,” he said. “Payment is not only an acknowledgement to our service but also a respect to our staff.”

Formed recently by several fresh graduates, On the Road is working on projects such as ‘dealing with difficulties graduates face in employment’ and ‘oral history told by the elderly in Suzhou’.

“We charge fees to ensure the quality of our service,” said Mr. Yue Tan, CEO of Micro-Service (微服网), a company that offers household appliance repairs and maintenance services to communities through online and offline platforms. “The fee is much lower than the market price, so the social value doesn’t get diluted.”

The convenience that it brings to residents has been reported in local newspapers, but the scarcity of funds also brings challenges to the company.

“We want to hire sophisticated technicians and have more deals, and so sustainable income is a must to retain talents and expand market,” Mr. Tan said, stressing the importance of pursuing economic goals. He described the lack of funding as “making bricks without straw.”

“Though I know the bright future is out there, if I run out of money, no choice, I will close down,” he said.

“Social business is more about social responsibility and in general Chinese people believe that public welfare activities should be free. The company we registered is expected to generate some income through sales of courses to fund our free service,” said Mr. Tao Mei, CEO of Flying Elephant (飞飞象), an organization that creates nature exploration activities and character cultivation courses for students aged between 7 and 12.

“For us who are in the education sector, running as a company may have better prospects, but since we are still immature, doing social business can accumulate experience as the public is more tolerant when a non-for-profit business doesn’t do well, so in essence these two organization forms are complementary.”

Each organizational form carries advantages and disadvantages: The private non-enterprise organization, initially launched as an effort of the Chinese Communist Party to encourage participation of the general public in social public welfare reforms in the 1980s, is perceived to have good relationships with the government, but the potential for marketization is limited. Meanwhile, the company structure is more efficient in using economic resources, but the social image may be compromised. Therefore, double registration is considered a solution by many to attain social and economic goals simultaneously.

Finding resources that are idle or abandoned and adopting creative ways to turn “waste” into wealth is also innovation. Organizing activities such as making Minions (a cartoon figure) from waste fiber containers and painting on discarded tyres and small branches to make home decorations, Mofei Creativity is the kind of organization that discovers and makes innovative use of “hidden” resources.

Serve based on needs

During the interviews, most social entrepreneurs indicated their intention to divide their services into different levels and price them accordingly.

“Our most fundamental service will remain free, but for those participants who expect to have more specialized training or want to compete in national competitions, we will charge some fees,” Ms. Wang from Keep Moving said. “Our principle is to maximize public welfare, and the individualized service request is beyond the scope of regular activities and costs more.”

Mr. Mei from Flying Elephant also mentioned his strategy to generate revenues. “We are designing a set of more systematic and more comprehensive courses to satisfy those children who have more demands, on the one hand, we attract more participants, on the other hand, we have one more source of income,” he said.

In- and cross- sector cooperation

As has been said, many hands make light work. Finding complementary partners to cooperate eases social entrepreneurs’ burden of developing resources from scratch.

Networking of relationships provides access to diverse resources that are outside an individual’s immediate social circles. Social entrepreneurs can seize the opportunity to exchange information, increase knowledge and realize objectives. But cooperation is not only limited in the social enterprise sector; collaborating with companies is also promising. Flying Elephant has reached an agreement with the Bank of Communications and developed a tailored financial management curriculum for children, while Mofei Creativity is inviting design companies to join a “Creativity Bazaar” where children and their families sell and exchange self-designed products.

A large population creates large opportunities. The ever-growing sociocultural needs of the general public and the accumulation of social issues in regard to environment, health care, food safety, education, and unemployment etc. provide social enterprises ample space for growth. The increasing government emphasis on entrepreneurship and innovation and the goal of stablishing a harmonious society offers advantageous conditions to keep social businesses thriving. In September 2013, the General Office of the State Council issued policies on the purchase of services from civil society, acknowledging qualifications of both social organizations and companies. In December 2014, the State Council issued instructions on the promotion of philanthropy, which is the first official government document in the field since the New China was founded. In September 2015, the first unofficial social enterprise accreditation guideline was published by China Charity Fair, seen as a weather vane of social enterprises’ standardized management.

China is fertile ground for social entrepreneurship and – with those pieces in place – Chinese social enterprises will be ready to usher in a spring of progress and prosperity.

Huan Chen is a postgraduate research student in the MRes Management programme at the International Business School Suzhou (IBSS) at Xi’an Jiaotong-Liverpool University (XJTLU) in Suzhou.

Juelin Yin is an associate professor of management at the International Business School Suzhou (IBSS) at Xi’an Jiaotong-Liverpool University (XJTLU) in Suzhou. She is an internationally renowned expert on business ethics and corporate social responsibility.

Florian Kohlbacher is an associate professor of marketing and innovation at the International Business School Suzhou (IBSS) at Xi’an Jiaotong-Liverpool University (XJTLU) in Suzhou. He is an internationally renowned expert on business and consumer trends in Asia.