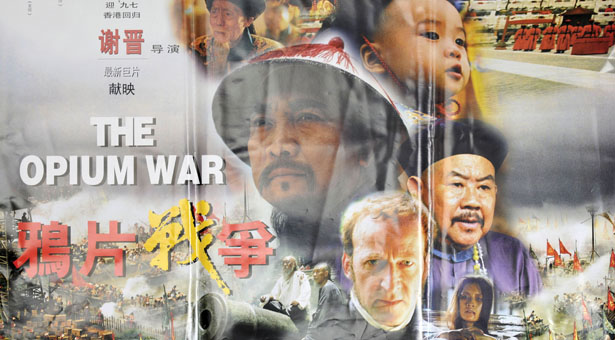 How people remember the past can often be more important than what actually happened. From America’s celebration of the “first Thanksgiving” to China’s lambasting of the “oppressive landlord” during the Communist revolution, societies often manipulate their messy and conflicting experiences into a clean, readily-understood story.

It is therefore fitting that historian Julia Lovell devoted her new book, “The Opium War: Drugs, Dreams and the Making of China,” to chronicling both the 19th century conflict and how it is remembered. Lovell breezily narrates how a handful of forces from the far-flung British Isles brought the Celestial Empire to its knees, and how the war’s legacy was later used and abused by Nationalists, Communists and others. China-watchers will be surprised at how profoundly the story’s themes still reverberate.

The root of this well-known conflict lay in Britain’s massive trade deficit with China. While Britons imported as much Chinese silk and tea as they could get their hands on, Chinese traders were far less keen on products from the British Empire – that is, until the British hit on one irresistible product. Cultivated in British India, opium was shipped to eager consumers in China in exchange for tea and silk.

This systematic doping of the Chinese people did not sit well with the ruling Qing Dynasty. When a handful of officials began cracking down on the narcotic, British traders started pressuring the government back home to pursue morally dubious actions under the banner of “free trade.” The British government eventually relented, and deployed a small force to Canton, in southern China, beginning the first Opium War.

This story has always been dramatic, but Lovell’s arresting descriptions of the characters who led their countries down the warpath makes it even more so.

She depicts Charles Elliot, the initial commander of the British forces in China, as a “harassed government functionary” dealing with “a fractious gaggle of foreign smugglers.” In another time and place, Elliot’s instinct for compromise and reason might have won him plaudits. In 19th century China, however, he was hopelessly overtaken by events, and despite his initial opposition to opium he was remembered in the media as a sell-out to British interests. By contrast, his replacement Henry Pottinger was a dyed-in-the-wool military grunt who saw every diplomatic problem as a nail to be hammered with a few gunboats.

Their Chinese counterpart in Canton, Lin Zexu, climbed the greasy Qing pole by diligently acing every Confucian exam that came his way. At heart, he was a “careful bureaucrat with a passion for freight management.” Charged with ridding the empire of pesky “sea barbarians” before he could move on to his dream job in Jiangsu province, Lin did what he did best: played strictly by the Qing book, to disastrous results.

At the heart of Qing problems, however, was the Emperor Daoguang. Lovell portrays him as a beleaguered leader who struggled to understand the myriad problems steadily enervating his empire. His tried-and-true Confucian texts had little to say about how to manage 19th century China’s crippling bouts of inflation and deflation, explosive population growth and the emergence of a powerful new breed of barbarians.

Frustrated and confused, Daoguang craved certainty, promoting well-connected but under-qualified officials who confidently told him what he wanted to hear. He micromanaged just enough to maneuver them into impossible situations, then castigated them when they failed.

Most of Lovell’s book is devoted to this colorful historical account, but the last third diverges into how successive Chinese governments twisted the Opium War to bolster their legitimacy.

The Qing regime initially downplayed the incident as a run-of-the-mill “barbarian trade disturbance.” But rival factions emerging within China molded the Opium Wars into an argument for why the Qing was unfit for command. Fascinating personalities and morally complex situations were mashed into stock heroes and villains for easy consumption. Over the following century, the conflict transmogrified in the public imagination into a full-fledged war which kick-started China’s “century of humiliation.”

Once in power, both Nationalists and Communists exploited this legacy to engender a sense of national cohesion. They emphasized how scheming foreign powers victimized the Chinese masses – a practice in which Chinese leaders still engage in some form today. Beyond the superficial similarities of China then and now – trade imbalances, harsh sentences for drug offenders and so on – it is the opium wars’ legacy of hostile nationalism that most profoundly reverberates in modern headlines.

Attempts by the country’s “angry youth” (fenqing) and some officials to use the Opium Wars as evidence of Western animosity towards China are dubious at best, and a lesser historian might bemoan infidelity to the historical record. But Lovell persuasively demonstrates that such interpretations generate a reality of their own – in a certain sense, they become just as “real” as the events themselves.

“The Opium War” occasionally strays, with unnecessary digressions into the likes of Fu Manchu and the intellectual history of the Celestial Empire. But for an engaging read that shines light on modern China, Lovell’s account is hard to beat.