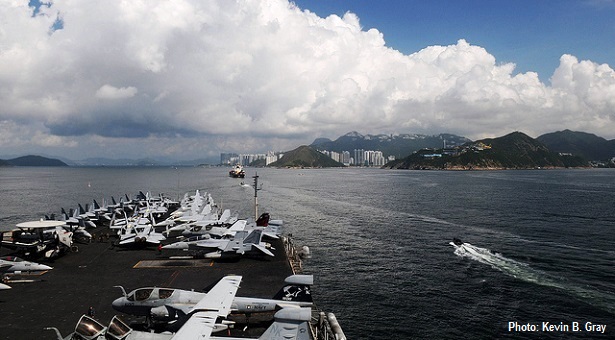 Q&A: Patrick Mendis on the Asian Infrastructure Investment Bank and America's role in the region

China’s plans in the South and East China seas have become more ambitious, its tone more strident and its actions more belligerent when confronting countries with competing claims to the vast swathes of nautical territory that Beijing considers its own. Satellite photos released earlier this year revealed China was engaging in massive island-building projects in the South China Sea, beneath which substantial oil reserves are thought to lie. But while military brinkmanship continues to escalate, the list of countries that have lined up to join China’s new Asian Infrastructure Investment Bank, including key US allies and despite Washington’s discouragement, are a testament to the country’s growing economic allure.

Patrick Mendis, former diplomat during the Clinton and Bush administrations and a distinguished senior fellow and affiliate professor of public and international affairs at George Mason University’s School of Public Policy, is the author of “The Peaceful War“, a book discussing how Chinese and American dreams are shaping a new Pacific World Order. Currently on a tour of Chinese universities to deliver a series of lectures on China’s ambitious new trade policies and Sino-American relations, Professor Mendis sat down with China Economic Review during his stop in Shanghai to discuss the evolving roles of China and the United States in the region’s economic and political spheres.

How does US activity in the Pacific region correlate with China’s current push forward of the Asian Infrastructure Investment Bank?

When the President Xi Jinping introduced this initiative late last year, Peking invited all the countries to take part in this Asian Infrastructure Investment Bank (AIIB) essentially to push for Chinese economic developments. Specifically, the “One Belt One Road” in the North and the maritime silk road in the South are initiatives being pushed forward by China through the AIIB. As a result, there are a number of issues that the US is facing.

If you look at our allies like France, the UK, France, Germany, Australia – and even America’s other ally in the Indian Ocean, India –  have all expressed interest in joining. As a matter of fact, India is an original partner and a first round country that has expressed an interest in this initiative. Now you will see that the IMF and the Asian Development Bank have also expressed interest in supporting or complementing the AIIB. If these countries go with China, then America is alone. What are the American business and financial community, especially in Wall Street, going to do?

The United States can choose not to support a certain policy, but our large banking companies like Goldman-Sachs, American Express, Bank of America, can go elsewhere to make money. If this is the case, there is no way the US administration can hold onto these companies. I think this is a losing proposition for the US. In my personal view, I think the US can gain from participation in the AIIB because it would have a great impact for the US economy. Therefore, I think the US needs to take part in this, whether it is a Chinese-led initiative or not.

How would you say this vision that China is carrying out relates to its activity in the South China Sea? Specifically, how does China’s “island building” strategy to extend their own economic trade zone relate to their position in East Asia?

China is using American doctrines and concepts. What I mean by this is that China is using what I would call China’s Monroe Doctrine. This American term means: Don’t allow foreigners or colonial powers into our hemisphere of North America and Latin America. Right now, China is essentially saying: the East China sea is ours, the South China sea is ours, this has historically all been ours. Like America, China is exercising power over what it believes to be its sphere of influence.

Throughout Chinese history, at least during the 100 years of humiliation, China was poor, China was weak, China was humiliated. Now, China is a rising power, they want to bring back their culture and history, which I think is a legitimate reason. Having said that, there is a difference between the “American Monroe Doctrine” and “Chinese Monroe Doctrine.” The “American Monroe Doctrine” was championed by Latin American countries. Latin American countries accepted American influence, and there was minimal protest against the United States. As a matter of fact, the Brazilian government [in] 1906 built a palace called the “Monroe Palace” in Rio de Janeiro to signify their approval of America’s foreign policy.

That is the complete opposite of China’s Monroe Doctrine in the South China sea. China has gone into the harbors, airstrips, schools, and temples in the Spratley [Islands] and claimed them as their own. China has turned that collection of islands into military bases in order to protect China’s interests, such as fishery and navigation passageways with busy cargo ship traffic. All other stakeholder countries in the region, like the Philippines and Vietnam, are protesting against this demonstration of power. In the future, I do not see Manila, or Ho Chi Minh City erecting palaces reminding their people of China’s influence. Instead what we see is Vietnam and the Philippines asking America for help to protect against Chinese bullying in the region.

Why is China doing this? Partly because of its history, partly because of their economic interest in the region, and partly for its own national interest. China has domestic economic challenges in the years to come, so they want to make sure that beneficial resources are coming through for the Chinese nation. By looking at China’s own history, I am very optimistic that China would bilaterally try to resolve this issue especially since their is an economic interest nations like Vietnam and the Philippines. They have close trade and economic interests with China, therefore China has greater influence over these countries. In addition, these nations are China’s neighbors, while America is far away. Within international relations, it is advantageous to have a good relationship with your neighbors.

In my opinion, there is a greater interest for these nations to have a good relationship with China. China would like to resolve these border issues and the claims for these disputed islands. Therefoe, in the end I hope these nations and China will come up with some type of agreement, or create a code of conduct to govern relations in the South China Sea. I’m hoping that Chinese leaders will recognize the importance of these relationships. If China wants to have a peaceful rise to power or peaceful development, this is the best way to show the world that yes, we have challenges, we have problems with our neighbors, but we resolve them. This is how we resolve problems. We are not sending our troops, we are not sending our military aircraft, we don’t send in our drones, instead we send a subtle message to America that we are going to be a better leader than you are. That is the kind of message that China is going to send to states in the South China Sea. They are will resolve these these issues bilaterally and not through direct force. Otherwise, China will be making the same mistakes that America has already made in the past.

Having said that, as far as military presence goes, America is still firmly rooted in the South China Sea. How do you see the relationship between China and the United States playing out in
this region?

There are two different answers to this question. One, is that America will apply its check and balance system as a means of maintaining a balance of  power in the region. If China is exercising its show of power in the South China Sea, America has to demonstrate that it will stop the power through the use of its own power, and therefore create a balance. Under this policy which we refer to as the Madisonian system, power has to be balanced with another power. I think American leadership is indoctrinated with this idea that balance of power has to be there within international relations. That’s the Real Politick, or the Kissinger politics of international relations.

China is different, China is always driven by stability and order and harmony. These are beautiful concepts. They have an interesting history in China. If you were to look during the Ming Dynasty at China’s foreign policy, when Emperor Zhu Di sent admiral Zheng He to conduct seven voyages in the South China Sea to the “Indian Western Ocean,” known now as the Indian Ocean. The emperor’s objective was to have diplomatic relations with the thirty countries present in this region. In fact, this was almost 100 years prior to Christopher Columbus’ arrival to America, and he came in three tiny boats. This voyage went with hundreds of huge fleets to the Indian Ocean, all the way to Africa and the Middle East.

These voyages and China’s historical diplomatic record is one example that China’s intention was not, is not, and will never be to colonize other people, or take land unnecessarily like the European powers did in Asia, Africa and Latin America. Their intention is to respect the rest of the world. China is saying we would like to have more order, we like to have stability, we would like to have harmonious relations. Chinese society is heavily influenced by Daoism, Confucianism, and Buddhism. These are beautiful traditions and teachings that I think influence China’s foreign policy decisions. Their goal is to achieve stability, order, and harmony. In the West, we predict China’s decisions through our own prisms, experiences of colonialism, balance of power and real politick.

Yet, China looks at the world. The Chinese mindset is coming from its tradition of historical, religious, and cultural underpinning. I think given this, more and more people will realize that China has a unique and different approach to solutions. In the future, I think that the US and China will begin to understand cultural differences and begin to appreciate and accept them. By doing so, I believe relations between the two countries would strengthen tremendously. In the West, we tend to look at everything as a zero-sum game: you lose and I win, or vice versa. That’s diplomacy or international relations in the West. However the Chinese view diplomacy as a win-win situation. How can you win and how can I also be the winner?

If we begin to have this mindset and accept that these two cultures are different, I think that more people will start to realize – especially policymakers, academics and scholars – will begin to see the world differently. That is what I try to advocate in my book. You cannot look at the future unless you look at the past. The farther you can see into our own past, the farther you can see into the future. This is exactly what Winston Churchill said, “the farthest of the future depends on what we can see, or the farthest history we can understand.” I think that  US leadership, scholars, and policymakers, as well as their counterparts in China will begin to realize that there is a wisdom in our histories. We can avoid places where we made mistakes in the past and try to look at the future differently. ♦