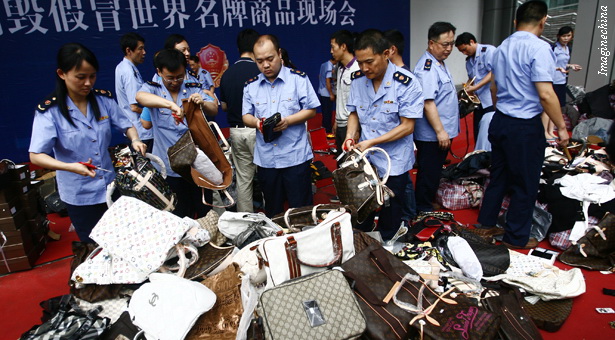 Pirates of the Middle Kingdom

Those who live in China can pass entire days using only counterfeit products. Waking up in the morning, a man could shave with a Gillette razor of a suspicious hue of blue before getting into a Mini Cooper with surprisingly small wheels. Once at work, he could switch on his overly cheap Cisco computer and work on Microsoft software that periodically crashes his system, before enjoying a 10:30 am break with a drag on an unevenly burning Marlboro. On his way home, he may stop for dinner at KFG or Pizza Huh.

Anyone who has knowingly lived such a day might think China has no legal protection for intellectual property (IP). Approximately one-quarter of the vendors on the Office of the US Trade Representative list of notorious markets for counterfeiting released in December were websites or companies in mainland China. Yet China’s intellectual property law, on paper, is actually comprehensive, and “it’s been pretty good for a long time,” said Stan Abrams, a law professor at the Central University of Finance and Economics law school in Beijing.

China started earnestly addressing intellectual property law when it acceded to the WTO in 2001 and pledged to improve its protection of IP rights. The country inked an international agreement called Trade-Related Aspects of Intellectual Property Rights (TRIPS) with other countries in 2007 under the supervision of the WTO, which set out minimum standards for the protection of such rights. Since then, the law has been tinkered with on a yearly basis to become the much refined current system, which is largely in line with standards in the West.

But the law is ineffective because it is still not uniformly applied. China’s coddling of national manufacturing champions, provincial protectionism and uneducated judiciary make protecting intellectual property a gamble dependent on industry and area. Without rule of law, counterfeiters often escape the clutches of the law, aided by corrupt officials. It is not the letter of the law that is the problem, it is the enforcement of it.

Part of the problem is that all levels of the Chinese government prioritize fostering key industries and state-owned champions over the protection of IP rights. A domestic or foreign company bringing an intellectual property lawsuit against such a champion is unlikely to win in court. “These kinds of things are not on the books … It’s going on behind the scenes,” Abrams of CUFE law school said.

Such was the case in 2010, when state-run biopharmaceutical company Shandong Hilead Biotechnology appeared to violate the intellectual property rights of Cathay Industrial Biotech, a private firm in the same industry, with little consequence. Cathay alleged that a previous employee who became a founder of Shandong Hilead stole valuable IP rights, but it was prevented from gathering evidence for the case by the government, The New York Times reported.

Provincial protectionism also renders China’s painstakingly perfected IP laws ineffective. China’s provincial courts often act tribally to protect local defendants when confronted with claims of intellectual property infringement from another province. Provincial judges will often rule on the side of the local party if that benefits a local company, regardless of which party is in the right. Courts will “protect their local industry in order to promote it,” said Xu Xinming of Mingtai law firm in Beijing.

A glance at the way “well-known trademarks” are designated in the mainland also shows significant partisanship at play. Under existing treaties, brands that the trademark office or judges in China and other treaty countries designate as “well-known trademarks” enjoy more extensive IP protection, both nationally and internationally. Such a label is often sought by companies, not only for intellectual property protection but as an additional arrow in their public relations quivers.

In China, however, the way this title is handed out is “blatantly ridiculous,” said Clifford Borg-Marks, an independent IP consultant. Unknown marks from small towns can earn this designation because they have connections among the adjudicating ranks, while certain foreign owners with internationally renowned trademarks struggle for years to establish the title for their brand.

Another recurring problem is that China’s judiciary is often unfamiliar with the monetary value of intellectual property, which can seem abstract. In a recent case brought by the owner of the rights to Xi Yang Yang, a cartoon goat, against an alleged copyright thief, the judges didn’t understand why the amount of compensation being claimed was so high, according to Chen Xuhu, the lawyer from Zhejiang T&C law firm acting for Xi Yang Yang. An animated film featuring Xi Yang Yang had broke the domestic box office record for a Chinese cartoon, and children throughout the nation were hankering for goods adorned with the goat. “Older judges don’t understand the capital associated with something such as a cartoon. They think this is just a picture,” Chen said.

With judges ordering such low levels of compensation, pirates would rather pay damages resulting from a lost case than the more expensive fee to the rightful copyright or trademark owner. “Paying compensation … becomes part of their business model,” said Cindy Lin, owner of Chinese movie agent Infotainment, which frequently takes Chinese sites to court for streaming its movies illegally.

China’s pirates may not carry swords, but they are very adept at shielding themselves from prosecution.

Peddlers of counterfeit bags in Shanghai’s ‘fake market’ on Nanjing West Road pay a monthly protection fee, sometimes as high as US$4,825 to their contact in the IP regulatory departments, according to a vendor in the market, who asked to remain anonymous for fear of reprisal. The contact will then provide advance warning of raids, which usually occur immediately after an official denounces piracy in the media, said the source. When the policing groups do their rounds, the bags on display are surprisingly brand-free.

Judges are additionally reluctant to take perjury in counterfeiting cases seriously, adding to the frustrations of intellectual property owners. In one instance recounted by Borg-Marks, a factory-owning counterfeiter avoided paying compensation by making use of a Chinese law which says employee wages need to be paid before damages. The factory owner bribed a group of villagers unconnected to the case to appear in court as “employees” and swear that the pirate owed them wages. The counterfeiter then paid out all his savings in wages to his “employees” so it could not be confiscated by the court, and the employees later returned the money to him. The fabrication was eventually exposed, but no action was taken against the villagers.

In the West, perjury is not taken so lightly. “I’m not saying that [the villagers] should have been thrown in a dungeon somewhere, but in the West, if you perjure yourself, it’s a very serious matter,” said Borg-Marks, a consultant.

Although enforcement of IP protection in China is still relatively poor, recent developments show a nation gradually awakening to the idea that intellectual property is an asset. At the end of 2012, courts held Taobao jointly accountable for fake goods sold on its site by vendors, and a Hermes counterfeiter received a life sentence for making fake bags. In another instance reported by the Financial Times in March last year, Chinese villagers filed patents for copies of Ikea furniture. Though their und
erstanding of IP protection was still imperfect, these farmers and migrant workers demonstrated the growing awareness in China of the value of a design.

But respect for IP will not in itself strengthen enforcement. Only by quashing favoritism can China strengthen the rule of law. China can identify and erase provincial protectionism by setting up an independent regulatory system to ensure uniform judgments. To ensure that compensation levels are appropriate, the government should encourage more contact between judges and industrial bodies who can provide advice on the monetary value of IP, said Chen of Zhejiang T&C Law Firm. Increased supervision of police operations could also help counter corruption.

Until the kinks in enforcing China’s intellectual property law are ironed out, rights owners will continue to receive paltry protection. In contrast to the country’s elegant laws, the consumer products available on Chinese shelves will likely continue to be a mish-mash of crude counterfeits.