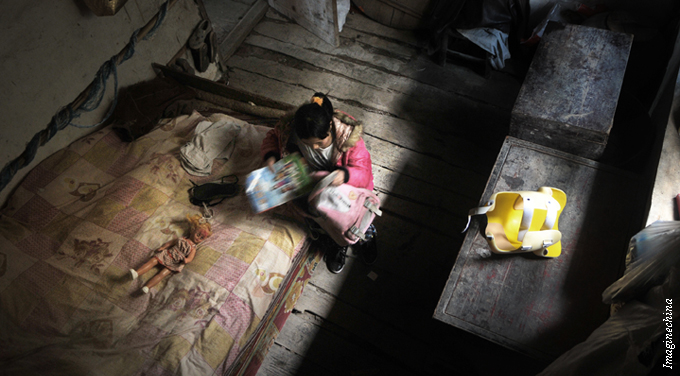 Poverty in China: Smaller, but tougher

Late last week Xinhua published a retrospective on poverty alleviation in China in which it claimed that the country had lifted 660 million people out of poverty in the years from 1978-2010, with 80 million remaining impoverished today. The figure, which the agency said was in line with international standards, is an increase over previous claims. It may also be more accurate.

The standard in China for determining whether a rural household is poor was raised in 2011 to an annual per capita income of RMB2,300 by the state council’s leading group in charge of poverty alleviation and development – an amount equivalent to just over US$1 a day. In its last report on poverty in China from 2009, the World Bank called the country’s rural poverty line excessively rigid. However, Ulrich Schmitt, the bank’s program leader for sustainability and resilience, said that is largely no longer the case.

“There’s a pretty consistent story between what the government has and what our figures tell us,” Schmitt said. By revising its official standard in late 2011, Beijing added 128 million people to the ranks of China’s officially recognized poor. In 2008, the number of poor based on the World Bank’s standard of US$1.25 a day stood at 173 million. By that same standard, though, 662 million had actually moved out of poverty, Schmitt said, adding that Xinhua’s figure of about 80 million still in poverty also seemed about right in light of substantial progress in poverty reduction here over the last five years.

However, he added that the challenges facing China outlined by the bank in 2009 had remained essentially the same. For example, the remaining poor have become increasingly dispersed, and economic growth has become less effective in reducing poverty. In some areas the need for action had become more urgent, he said, as in the case of rural-urban integration. With China still in the first third of its latest decade-long anti-poverty plan, the route out of impoverishment for many from the countryside remains uncertain.

One of the two major additions in the latest plan, adopted in 2011, is the targeting of regional poverty on top of already recognized poor counties and villages. The effectiveness of this new regional layer of organization is hard to evaluate only three years into its implementation. This lack of information is further compounded by the difficulty of assessing per capita income for families with members who have become migrant workers.

“I think what these figures really mask is enormous migration and the role of remittances from people that work off the farm in further away provinces,” Schmitt said. How much of a family’s income is generated in urban and coastal areas and then sent back to members who remain in an area officially classified as poor may not be captured by current collection methods, and increased migration within provinces and counties has further complicated the picture as more move to find jobs away from (but still closer) to home.

There is also tension in the latest phase of anti-poverty policy thanks to the push to urbanize rural residents. People from the most impoverished counties are being moved from the land they occupy, which itself is ostensibly owned by the collective in which they are all members. Not all are willing to be uprooted, and it’s not clear if the strategy will help push people out of poverty. The move also seems set to weaken the collective land system in the countryside which some are loathe to see undone.

While the collective system currently keeps rural Chinese from selling their plots off and is subject to land grabs from hungry officials (see our full report on hukou and land reform), it seems to have helped act as an unemployment buffer in the wake of the 2008 financial crisis. When foreign demand dropped and factory output slowed, many laid-off migrant workers in China – particularly in Guangdong province – returned to their plots in the countryside when they couldn’t find work. In so doing they found interim employment and may have helped dilute dissatisfaction that could’ve congregated and led to greater unrest.

However, land de-collectivization could help spur the integration of many people into cities. It could also, Schmitt suggested, help lead to the establishment of farmer cooperatives able to achieve a greater scale of production that is impossible when so many migrant workers are still holding on to small, individual plots as a sort of insurance.

If fairly implemented, professional cooperatives could free farmers from the land while also granting them a stake in the fruits of their former fields. But they would need some sort of social security system waiting for them, which current policy discourages by giving the most prosperous cities incentive to bar the door once their populations reach a certain size. As with many issues central to China’s future, progress on one front demands just as much on many others. ♦