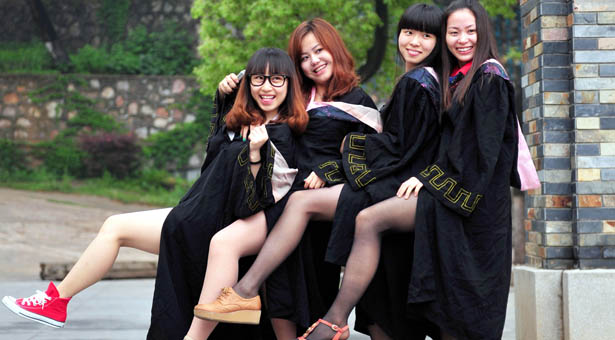 The highest goal for China’s elite students used to be gaining admission to Beijing’s prestigious Tsinghua University or Peking University. In more recent years, however, the consensus seems to have shifted, with an increasing number of students choosing to go overseas in search of world-class educations.

Many of these students strive to gain a foothold working abroad after graduation, but limited job opportunities send roughly 70% back to their homeland, according to recruitment consultancy Zhilian Zhaopin. The Ministry of Education says the number of “haigui,” or students returned from overseas, surged from 50,000 in 2008 to nearly 340,000 last year.

These students aren’t always quick to readjust. Many returning Chinese experience “reverse cultural shock” at institutional nepotism and lack of efficiency in Chinese companies. China Economic Review spoke with several current and former overseas students on what they learned about their home in their time overseas and why some chose not to go back.

In the US, the pressure to excel in order to stay in the country often forces Chinese students to make choices against their will. For example, if you want to pursue an academic career, you may have to suffer through topics that you may not be truly interested in. I studied structural engineering, an industry that is dying in the US. There are many limits to what you can truly feel passionate about doing when in a foreign country. If Chinese students want to stay in a foreign country, they have to be flexible, regardless of whether they believe in what they’re doing. I know a Ph.D. candidate in physics who sold boxed meals part-time. He couldn’t find a job after graduation, so he pursued another master’s degree just so he could stay in the US legally. He continued to sell boxed meals and probably owns a restaurant now.

I returned to China immediately after completing a two-year master’s degree in the US, since I was homesick and my boyfriend was in China. Job hunting went well. First I worked at a US biotech firm for one year and now am working at a state-owned company. I realized that I am more at ease with a Chinese company environment. At the previous foreign company, I mostly compiled data, which was tedious and less intellectually challenging. Since it’s a foreign firm, they wouldn’t share core technologies with us. It made me feel like a cog in a huge machine. But at the state-owned company I could leverage my experience and was assigned greater responsibilities. The only thing that bothered me when I returned was that Chinese people ignore traffic rules and blare their cars horns.

In 2005, I came to the UK for a master’s degree in materials chemistry and eventually got a doctorate in 2010. Most of my peers went back to China for work, because they thought it would be easier to find a good job. I decided to stay in the UK for another five years in order to obtain a permanent resident visa. After graduating I looked for jobs related to my major, but the results were frustrating. But I had helped a Chinese freshman who came to study to find a house at one point, and this gave me an epiphany. Some friends and I founded a real estate firm that helps Chinese overseas students rent houses in Sheffield. It’s never easy to start your own business, but that’s especially true in a foreign country. In China, the government and families often give financial support to recent grads who start businesses. However, as all the other members of my family are still in China, I have to be independent and overcome problems on my own. I hope I can help my family relocate to UK someday, when I really belong to this nation.

I worked hard searching for a job after graduating from Warwick University (in the UK) with a master’s degree in media management last year. It wasn’t fruitful, so after three months I returned to Shanghai. It was largely due to my lack of working experience in the UK. Substantial working experience is always more valuable than a sheet of paper. I wouldn’t say I am completely satisfied with my current salary, but I understand an overseas degree doesn’t guarantee higher pay. Most of my learning in the UK came from interacting with people from different countries. In our college, Chinese were a minority. I graduated as a more confident person in general, and I was more aware of how to work to benefit a team.

Compared with the traditional Chinese system, higher education in western countries is more rigorous and the academic atmosphere is more open. These advantages are the key reason that many Chinese students choose to go abroad. This trend also benefits our country: Returnees will bring good academic ideas, diverse cultural values and advanced technologies back to China. When I was one of the few overseas students about 30 years ago in Germany, it was more difficult to integrate ourselves. Nowadays, Chinese students already have access to information about the whole world through the internet. I think they should take more advantage of this. Overseas returnees offer some advantages to employers, including language ability and cultural understanding. However, this often means they ask for better wages and benefits. In fact, in the early stages of their careers, the salary differences between those who studied in China and those who studied overseas are not that big. But as time goes on, employers often recognize the strengths of the overseas returnees.