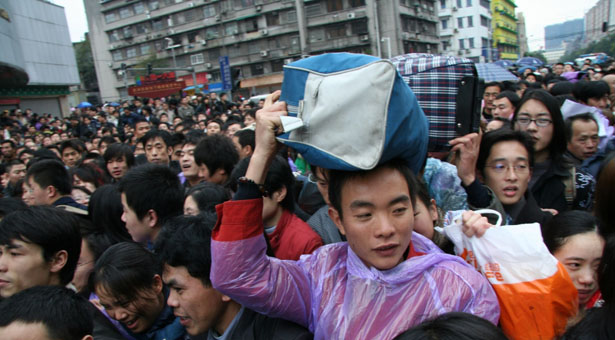 Return of the yellow cow

Scalpers are once again paralyzing the rail-ticket system as China tries to clear the way for the world’s largest annual mass movement of humans, set to start February 9. Chinese make an estimated 2 billion trips during the weeklong Spring Festival holiday, often from the large cities where they work back to their rural, ancestral homes, putting pressure on all forms of transportation.

The holiday has also been the traditional earnings season for ticket scalpers, or “yellow cows” as the Chinese mysteriously dub them. The practice of buying up tickets and selling at inflated prices looked doomed at the beginning of 2012, when the Ministry of Railways pushed through a nationwide ticket reform, including a “real name” system and a long-overdue online ticketing option. Ticket offices now limit each passenger to one ticket with their name and identification number printed on it, and passengers’ IDs are checked as they pass through the train station.

While the reforms relieved some ticketing problems last year, the yellow cows are now back. Scalpers are taking advantage of sloppy technical loopholes in the online service, using specially designed software to buy tickets quicker than those without the technology, according to Economic Information, a branch of state-owned Xinhua News Agency. Many scalpers stockpile ID cards, some of which are borrowed, to make multiple ticket purchases.

Some are also using an “instant-kill return” method to control the supply of tickets, according to Zhejiang News. A scalper buys a bunch of tickets online and then returns them one by one on command from a partner who is assisting a customer at a ticketing office. When a ticket is returned, it becomes instantly available for the customer to buy. The traveler who receives that coveted ticket with their name and ID printed on it will reward the scalpers handsomely.

Can’t get no satisfaction

As in years past, the system isn’t doling out a fair supply of tickets. And if New Year’s passengers don’t get to their destination, the implications could be serious. For the Chinese government, guaranteeing some degree of mobility for Spring Festival travelers is a question of social stability.

A freak snowstorm in early 2008 stranded tens of thousands of migrant workers in the Guangzhou train station. The incident ended peacefully, but reports on the stop-up predicted mass unrest.

The ministry will have to respond quicker this year. Economic Information, often a channel for Communist Party information, came down hard on the transportation office this week for thinking their website could outmaneuver the yellow cows. “[Failure] was also because the designers of the ticket-purchasing site were far too wishful in their thinking,” it said.

With or without scalpers, the volume of travelers at this time of year guarantees some form of gridlock. There are simply too many people on the road. Perhaps only after several generations of urbanization will Chinese people’s current cross-country dash turn into the short Thanksgiving drive to grandma’s house familiar to so many urban Americans.

One last tip: Customers who get scalped tickets without their ID numbers should separately buy the cheapest ticket available (passage to a nearby station can cost less than US$2). These legitimate tickets will have their names and IDs, allowing the traveler to enter the train station and access the train that their scalped ticket is for. Yellow cows call this innovative technique “buy near, seek far.”