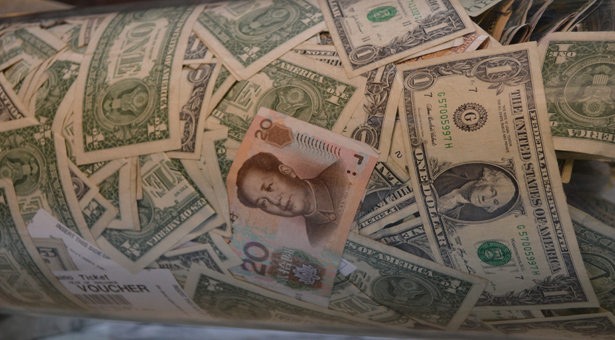 The internationalization of China’s currency has become one of the hottest topics in international finance during the last few decades, but the bulk of the analysis has been on the process itself, rather than reasons behind it. A proper understanding of the key driver behind the Chinese authorities’ decision to move towards renminbi internationalization is essential to judge the success of the steps taken and foresee what the next steps may be.

There are two seemingly contradictory reasons for China to have started pushing for RMB internationalization. The first is the need to diversify in an increasingly positive international investment position. China is the world’s third largest external creditor (see graph), although much of its wealth is held in the form of foreign reserves, as opposed to foreign direct investment like the other large international investors (namely Japan and Germany).

Diversifying China’s massive currency holdings away from the US dollar and the euro appears to be virtually impossible given the very limited role that other currencies play in the international monetary system. Instead, “RMB-izing” part of China’s foreign assets may be the easiest way to limit the exchange rate risk for the Chinese in as far as they hold part of their wealth in currencies which are bound to depreciate against the renminbi in the long run.

Japan followed this line of thought when it timidly started to promote the use of the yen as an international currency. Probably the best example of this strategy is the yen-denominated (samurai) bonds that foreign borrowers in major international financial centers issue to be purchased by Japanese investors.

The other potential reason that China is pushing for renminbi internationalization, which is seemingly (but not necessarily) contradictory, is that the Chinese government wants to prepare for a phase in which it will become a net borrower internationally instead of a creditor.

China is accumulating contingent liabilities. This trend should become more apparent as its population ages and its productivity stalls with the completion of the urbanization process.

It is enough to look at the cheap financing the US has access to today – notwithstanding its terrible finances – to understand how exorbitant the privilege of having a reserve currency can be.

The gift of foresight

While the two stories may look contradictory, they could be compatible in the more distant future. China’s finances are sound and its external position even more so. But this situation may change in the long run – which is the general time frame for a currency to become international. This is why it would make a lot of sense to start holding part of China’s net foreign assets in renminbi while preparing to become a debtor in renminbi as well. It is always more advantageous to be a debtor in your own currency.

China’s strategy of internationalization looks very different from that of Japan. Foreigners are not issuing debt in renminbi which is then purchased by Chinese residents. On the contrary, many of the issuances in Hong Kong’s dim sum bond market are conducted by Chinese entities and bought by non-Chinese residents. On the trade settlement side, more of China’s exports are denominated in yuan than imports, which implies more capital inflows than outflows.

Moving to our second potential driver for renminbi internationalization, the question then is whether China is following the US example and preparing for a distant future when it becomes a net international debtor. Looking at the dim sum bond market in Hong Kong, the very important role that Chinese issuers and foreign investors play hints at a tentative yes.

The still-limited size of the dim sum bond market and the porousness of China’s capital controls with Hong Kong call for a very cautious assessment of the main driver behind the internationalization process. Still, it is worth a try.