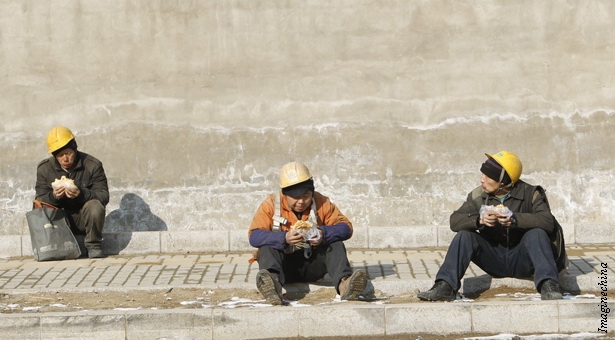 In 2007, residents in three Chongqing communities were invited to do something they had never done before. A small team of researchers from Chongqing Technology and Business University asked them to jot down their deepest hopes and fears on index cards. In a few sentences a piece, the nearly 1,500 respondents, many of them recent transplants from the countryside, painted a disturbing picture of everyday life in urban China.

The informal survey, led by British economist Gerard Lemos, showed these communities to be on the verge of crises in health care, employment and education, with little promise of relief from those woes in the future. Both young and old were wracked with anxiety.

In “The End of the Chinese Dream: Why Chinese People Fear the Future,” Lemos documents the research experiment he conducted as a visiting professor in the southwestern Chinese city. Responses to the four mild questions posed in the survey revealed what Lemos regards as the honest, underlying apprehensions of contemporary Chinese society – and dark ones at that. The author goes beyond simple analysis of the data and ties this current of unease with the tumultuous economic history and political chaos of the past century.

“Losing my job changed my life. [My greatest worry is that there is] no guarantee when I fall ill. I wish to have a lot of money, probably a million.”

The anxiety and almost childlike aspirations expressed by this 46-year-old woman appear again and again throughout the survey. Lemos recognized that it would be a challenge to receive heartfelt answers to questions such as “What is your biggest worry?” and “What do you wish for?” He overcame this by using a culturally recognizable object that he called a “wish tree.” Temples across China feature mural-like boards on which visitors can post a wish on a paper card, similar to the leaves on the tree. Lemos replicated this format to take the pulse of Chongqing’s wellbeing.

Lemos obtained party approval to erect wish trees in three developing communities in the city – no simple task in a country where even Chinese citizens are barred from polling one another without official approval.

Even with an official blessing, in some cases party minders wanted to vet the cards for signs of dissent. In Banshan Ercun, a southwest Chongqing community, Lemos and his team dashed off from a meeting, index cards in tow, after officials said the cards could not leave their sight.

The local government should have filled out a card too: one expressing their fears that Lemos would expose his findings.

Everything all the time

For the hundreds of millions of Chinese migrants who live in the purgatory between rural and urban life, contemporary China is a soured amalgamation of economic experiments. During the all-encompassing rule of Mao Zedong, which stretched from the founding of the People’s Republic in 1949 to Mao’s death in 1976, most Chinese were members of a work unit, where food and resources were distributed somewhat evenly. Chinese received medical care and compulsory education. The government allocated land, housing and employment. “This was the ‘iron rice bowl’: It never broke regardless of how often it was dropped. But it is broken now,” Lemos writes.

As the most inefficient state enterprises broke down in the mid-1990s, tens of millions of people lost their jobs yet failed to qualify for benefits. In Chongqing’s Banshan Ercun neighborhood, respondents who had been laid off at a state-owned tire factory were particularly anxious about how they would afford medical bills and their children’s education expenses.

The cost of education is a heavy burden on parents in China, especially for farmers hoping to see their children shake off the yoke of the rice field. Education bills can eclipse up to half of the annual earnings of many migrant households. Add that to health care costs: In some communities, residents pay a yearly health care fee, a US$128 charge for people making as little as US$33 per month, according to Lemos. Elderly people were frightened that neither they nor their children could get proper health care.

Many of those who shared their wishes with Lemos were farmers who had recently lost their land to urbanization and were hustled into the city without reliable sources of income. “My land being expropriated [changed my life. My greatest worry is] having no land to work on,” a recent entrant to Chongqing wrote on a card.

The survey showed young Chinese to be plagued by job insecurity and the effects of the one-child policy. Suicide has become the main cause of death for people between the ages of 20 and 35, writes Lemos, citing a Ministry of Health report. More than 20% of high school students in China consider killing themselves.

Chinese parents of all incomes tend to be wildly ambitious when it comes to planning their only son or daughter’s educational future. These expectations, coupled with the great responsibility for taking care of elderly parents, weigh heavily on families. “I’m worried about the medical problems because we are a one-child family,” one 59-year-old mother writes on a card. An 11-year-old girl was already feeling the pressure of poverty and inadequate social services: “The love from my parents [changed my life]. I’m so sad my parents got sick.”

Across the board, young male respondents expressed deep concern over finding a wife. Unfortunately, demographics are not on their side. China currently has 12 men for every 10 women, and the ratio is set to worsen due to illegal selective abortions of female children.

Young, unemployed and unmarried men are the most common law breakers and a potential source of social instability. Lemos notes the bands of hooligans that roamed the Chinese countryside during the Qing Empire; some gangs went on to spark rebellions that threatened the dynasty itself.

The book claims to contravene the popular notion of a harmonious China. Yet some of Lemos’s assertions, while valuable to the uninitiated, will underwhelm those who witnessed the country’s last decade of development first hand. For that matter, anyone paying attention to the endless domestic and international media reports of protest, scandal, corruption, profiteering and environmental destruction in China may find the desolate outlook of the country’s citizens unsurprising.

Those looking for a meaningful yet concise interpretation of Chinese history, paired with original and revealing insight on the country’s social state, will find a good read in “The End of the Chinese Dream.” The book’s anecdotes will entertain even the most avid China watchers.

The author does an excellent job in summing up the most palpable evidence that not all is well in the People’s Republic: the poisoned milk powder scandal, the stabbing of kindergarteners, ethnic uprisings in the country’s Wild West. Despite China’s economic progress, this continuous stream of bad news has made international headlines.

But readers should still question the author’s conclusion that the Chinese dream is over. The revolution may have died with Mao, but the country is still in the midst of the world’s greatest economic reform. The chaos of prolonged war, followed closely by terrifying mass movements such as the Great Leap Forward and the Cultural Revolution, could result in little else but bad dreams for the Chinese people for decades to come. Economic progress and unprecedented poverty relief have come in spite of that.