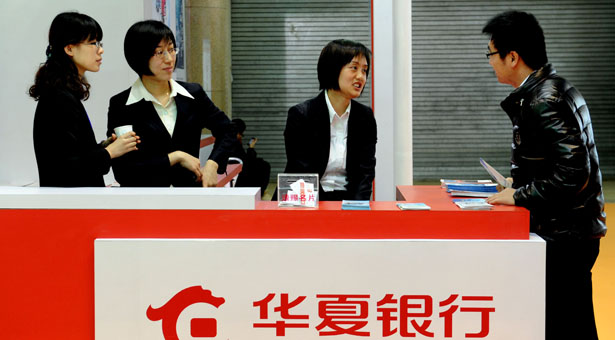 More than a dozen people brandished picket signs and took to the doorstep of Huaxia Bank’s Shanghai branch in early December, angry about losing money on obscurely structured investments known as wealth management products (WMPs). Huaxia had sold WMPs that promised double-digit returns to certain customers. The bank then gave its customers’ money to a third-party investment firm charged with making high-interest loans to several businesses. The outcome would seem to be a simple one: The businesses defaulted on the US$22.5 million in loans, and Huaxia customers lost their money.

But the Huaxia incident and resulting investor anger highlighted how all too often in China, it’s unclear who ultimately bears the risk for bad investments. The government is still investigating the Huaxia incident to determine which of the parties were responsible – negligent investors or dishonest bankers.

The Huaxia investors may be equally shocked to find out how insecure, at least on paper, even their normal savings accounts are. Unlike most European nations and even developing South American countries, China currently has no insurance scheme to ensure deposit holders receive some of their money back if a bank goes out of business. The US Federal Deposit Insurance Corporation, which began in the 1930s and now insures conventional savings accounts up to US$250,000, provides an example of how such a system might be run.

Of course, most Chinese banks are majority-owned by the government, unlike in the US. Many Chinese interpret this to mean that the government would bail out any bank facing liquidation – in other words, as an implicit deposit guarantee.

Savers with the Big Four banks may be justified in this view. In 1999, the government arranged for the Big Four to unload about RMB1.4 trillion (US$169.3 billion) in non-performing loans by selling them to four state-owned entities, which were established with the express purpose of unwinding the loans. That bailout, as well as some similar transfers of NPLs in the 2000s, allowed banks to escape from their bad lending decisions.

But the government has also let smaller financial institutions fail in the past. Guangdong International Trust and Investment Corporation (GITIC), a state-backed investment vehicle, took billions in investor capital with it when it went bankrupt in 1999, despite the belief that the government would rescue it. Of GITIC’s US$4.69 billion in debts, creditors only recouped US$786 million.

These ad hoc decisions confuse investors, but a long-delayed plan to introduce deposit insurance could help clear up any doubts. The idea has been raised at high-level policy meetings, and the central bank endorsed deposit insurance in July. The New York Times reported last week, citing anonymous officials, that policymakers may again take up this long overdue plan.

With the “implicit” government guarantee of state-owned banks, such a system may appear to be a formality. But it would send a clear message to the financial sector that sometimes obfuscates where the risk lies if an investment goes bad. Banks would need to take responsibility for customer money, at least the funds in normal savings accounts, by paying into a government-established scheme. If the bank goes out of business, the insurance policy pays out investors some or all of the money owed them.

Banks likely oppose this plan in behind-the-scenes discussions, on the grounds that the insurance payments would hurt their bottom line. But while the plan will cost banks money, it seems unlikely to shift their earnings much. Barclays banking analyst May Yan predicts that such a policy would only affect return on equity – profits divided by the value of outstanding shares – by 0.3-0.5% over the next few years for the banks the firm tracks.

Deposit insurance would only cover run-of-the-mill savings accounts and not other financial instruments like WMPs. But deposit insurance system would make it clearer to investors which products are safe and which, like WMPs, are risky. Investors have the right to take risks on products like Huaxia offered, but they need to clearly understand when they are doing so.

A better understanding of risk will help Chinese banks allocate capital more efficiently. Under the deposit insurance scheme, a bank’s payments would likely depend on how regulators score them for safety and performance, Yan said.  Banks that manage their capital most effectively would thus pay the lowest premiums.

Deposit insurance would be a first step on the path to clarifying who is responsible for riskier asset classes like wealth management products in the event of a default. As risk becomes clearer, investors may still complain when they lose money. But at least they will know they only have themselves to blame.