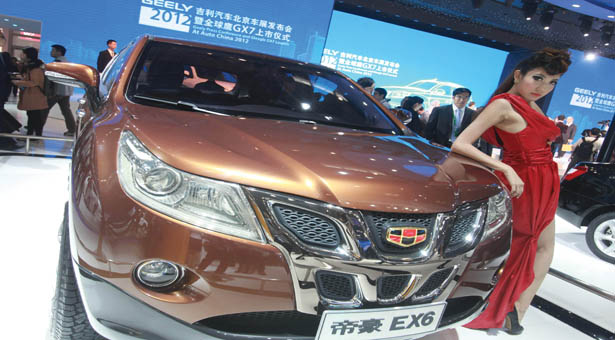 Domestic car companies may be struggling in the wealthy and ultra-competitive markets of China’s major cities. But many industry insiders suggest they will fare much better in the developing markets of China’s smaller towns and cities.

Most people in China still do not own cars – 70% of those who bought a car in China last year were first-time buyers. But personal cars are far more common in the first-tier cities of China’s coast – Shanghai, Beijing, Guangzhou and Shenzhen. The wave of personal car ownership is just beginning to reach smaller cities.

This will likely change the structure of China’s auto industry. Consumers in lower-tier cities have less affinity for foreign brands. They also have less disposable income, making the cheap prices and gas-sipping engines of Chinese car makers much more palatable.

“Consumers in third- and fourth-tier cities are much more price sensitive than consumers in the first-tier cities,” said Wang You, investor relations spokesperson for state-owned Dongfeng Motor. “As a result, there’s likely to be a more stable market for domestic brands there.”

The opening up of lower-tier city markets will definitely be a boon to domestic companies. Autofacts, a division of PwC, projects that the number of vehicles sold in China will nearly double to 27 million between now and 2018. Second- and third-tier cities and other less developed regions are expected to drive nearly 80% of that growth.

Two can play this game

But there are some bumps on this road to riches. For one, expanding sales networks into lower-tier cities may be a challenge for domestic brands, many of whom already struggle to provide consistent service across their networks. “[Domestic car brands] will need to go expand their operations into smaller towns and cities. This could affect their brand image if it’s not handled well,” said Shang Yugui, a vice president and spokesperson for Great Wall Motors.

And of course, the ability of Chinese companies to capitalize on this growth hinges on remaining competitive in the low-cost segment. But this, too, is under pressure.

One source of competition is low-priced foreign brands such as Hyundai and Kia, which are cheap and fuel-efficient enough to appeal to first-time buyers with relatively low incomes. “[Hyundai and Kia] tend to be very attractive alternatives to locally branded cars, because they are priced not all that much higher, about 20-50% higher depending on what product you’re talking about,” said Bill Russo, an independent advisor at consultancy Booz & Co.

Another source of competition is Sino-foreign joint ventures. At the behest of the central government, JVs such as Shanghai-GM, Mercedes-Beijing and Toyota-Guangzhou have begun launching their own low-priced, joint-venture brands. Beijing’s goal is to encourage more technology transfer – the idea being that to produce a cheap car in China, foreign companies will have to localize their products.

But the upshot is that the lower segment is becoming even more saturated with competitive, low-priced products, such as the Everus 1, from Honda’s joint venture with Guangzhou Auto, and the Baojun, a small family car produced by General Motors’ joint venture with SAIC and Wuling.

The Baojun brand “is targeted at price-sensitive, first-time lower-tier city buyers, and that’s going to directly compete against the Geely, Great Wall and Chang’an own-branded products,” Russo said. “The policy objective is to get the foreign companies to share more of their technology, but in the process they’re actually creating more competition in an already hyper-competitive market.”