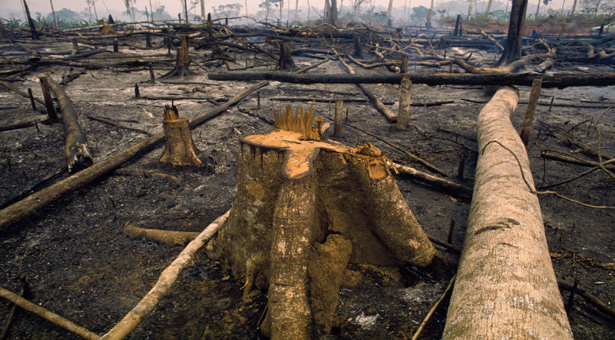 On the face of it, trade relations between China and Brazil are better than ever. On June 21, the two nations signed a bilateral trade agreement at the “Rio+20” UN Conference on Sustainable Development. The agreement could have wide ramifications, due to the sheer scale of trade involved: China overtook the US as Brazil’s biggest trade partner in 2009, and bilateral trade grew a whopping 34.5% last year.

This trade imbalance has undesirable knock-on effects. Surging commodities exports have driven up the price of Brazil’s currency, the real. This has in turn damaged the competitiveness of Brazilian exporters and led to grumbles of “de-industrialization” (see box on pg 46). Perhaps more importantly, natural resource production has put a tremendous strain on Brazil’s environment, notoriously demonstrated by the ongoing deforestation of the Amazon rainforest.

Despite these trepidations, experts say the trend of ever-rising resource exports to China will continue, particularly in the soybean market. Chinese demand for soy is surging beyond current supply, and only Brazil has the potential to fill the gap. This has focused Brazilians’ attention on the damage soy production causes to the environment and in turn led to an unusual alliance between business and conservationists in Brazil.

“One of my best friends today is the president of Greenpeace,” said Carlo Lovatelli, president of the Brazilian Vegetable Oil Industry Association (ABIOVE), a soy industry trade body. “If you would have asked me 10 years ago if this would happen, I would have said no.”

In developing nations, soybean consumption is driven largely by rising incomes and urbanization, and China has both in spades. Although the economy has slowed in recent months, China’s GDP per capita more than doubled over the past decade, from US$1,020 in 2001 to US$2,425 last year. At the end of 2011, approximately 51.3% of the population lived in urban areas, according to the National Bureau of Statistics – marking the first time more than half of Chinese people have lived in cities.

Wealthier urbanites tend to eat more protein-rich meat products, such as pork, poultry and fish, which in turn require animal feed, the biggest ingredient of which is soy. The American Soybean Association estimates it takes 2.8 pounds of feed to produce one pound of pork. Meat consumption in China has almost doubled over the past two decades, according to the World Bank. The country now produces around half the world’s pork supply and is the world’s largest soy buyer, consuming about a quarter of total global production each year.

Analysts say China’s soy demand will continue rising for some time yet, perhaps doubling by 2020. “Over the next 10 years, China may account for 80% of the growth in world soybean trade,” said Mark Ash, an oilseed expert at the US Department of Agriculture.

Beijing has plans to increase soy production at home: The country’s 12th Five-Year Plan sets targets for minimum hectares of farmland, as well as increased productivity. But there are structural impediments to increasing China’s soy output. Most arable land is already in use, and rapidly expanding cities and diminishing water resources in northern China have further crimped supply.

Policy also gets in the way. “In a lot of soybean production regions such as Heilongjiang, you drive by fields like those you would see in Iowa or Illinois or Mato Grosso [Brazil] – they are vast and big and you get the idea that the economies of scale are there,” said Paul Burke, regional director of North Asia for US Soybean Export Council. But, he explained, unlike in the US or Brazil, no single farmer owns the land; instead many are cooperatively owned and operated, which leads to lower productivity. The result is that Chinese farmers “can’t achieve the same economies of scale [as in the US], even though it looks like they could,” he said.

China will almost certainly continue to rely on imports of soy to meet demand. Today, the country grows only about 20% of the soy it consumes. The USDA estimates China will have to import around 56.5 million metric tons of soy in 2012, mostly from the US, Brazil and Argentina. By 2020, the USDA expects that figure to rise to around 84 million metric tons, with just 15 million metric tons grown locally, noted Ash of the USDA.

The US is currently the largest exporter of soy products to China, sending a record 24 million metric tons of the stuff (worth US$12.1 billion) last year. But like China, the US cannot easily expand production to meet growing demand. Existing acreage is maxed out, and giant productivity breakthroughs are unlikely.

That leaves Brazil as the most likely major country to increase output, because it has room to both expand farmland and increase efficiency. It currently runs a close second to the US as a source of China’s soy consumption, sending China around 21.1 million metric tons of soy last year. Burke of the US Soybean Export Council figures it will surpass the US within the decade.

“There are not many options for agricultural expansion other than Brazil, a little bit in Argentina, and Africa sometime in the future,” said Lovatelli of ABIOVE. This has led Beijing to take an increasing interest in Brazilian soy. “China knows very well that they have to lock in the origination of the food they need, that they cannot provide [it] themselves.”

Trees in the way

It is a big opportunity for Brazil, said Lovatelli, but also entails a tricky balance of economic and environmental interests. The soy industry is certainly no stranger to charges of environmental degradation. In 2004, environmental non-profit organizations such as Greenpeace and the World Wildlife Fund sponsored a media campaign across the EU to raise awareness of the dangers of expanding soy farmland, particularly deforestation in the Amazon rainforest.

Their concerns are at least somewhat justified. The Amazon rainforest lost a staggering 9.6% of forest cover between 1990 and 2010, as farmers and ranchers razed ground for soy farmland and cattle ranching.

Around six years ago, however, the situation began to change. Soy producers and traders acknowledged that the activist campaign was inflicting serious damage to their business. Moreover, the government in Brasilia passed an important amendment to the country’s Forest Code, which provided specific guidelines on the conservation of Brazilian rainforest.

Hemmed in by falling demand and tighter regulation, soy traders decided to work with environmental groups instead of fighting them. In 2006, the trade groups ABIOVE and the National Grain Exporters Association (ANEC) voluntarily enacted a soy moratorium, forbidding their business members from trading soy cultivated on land deforested after the Forest Code amendment was passed. The trade bodies reached out to groups like Greenpeace and the Nature Conservancy to help them monitor producers and consult on the moratorium.

The organizations have considerable power. Lovatelli of ABIOVE notes that the two groups combined account for around 90% of purchases from soybean producers in Brazil. This gives them negotiating heft with pro
ducers; violators of the Forest Code have been effectively shut out of the market.

“When we move in, people listen to us,” Lovatelli said. “[Soy farmers] are almost sure that all they produce will be purchased by us, and [so] they might as well do it the right way.”

The effort is a promising example of how Brazil’s civil society, politicians and corporations have worked together to conserve the rainforest. However, some critics charge that they are focusing on the wrong problem.

Soy has received plenty of attention for deforesting the Amazon over the past decade, but its actual role is disputed. “It was always a very minor cause of deforestation,” said David Clearly, strategy director of agriculture for the Nature Conservancy, a non-profit environmental organization. The primary driver has been the beef industry, as cattle ranchers clear rainforest for grazing cows. Clearly estimates that ranching has directly led to about a fifth of the deforestation.

But soy farming has had damaging effects elsewhere in Brazil, said Clearly. “The real issue with soy does not actually have to do with the Amazon, but with the Cerrado.”

A savannah highland which occupies much of central Brazil, the Cerrado is among the most bio-diverse savannahs in the world. Environmental activists expect some soybean farmers who cannot create new farmland by deforesting the Amazon to simply shift to razing the Cerrado. However, there is reason to hope that degradation on the scale of the Amazonian deforestation will not replay itself on the savannah.

Part of the reason is that conservationists like Clearly are working with farmers to target appropriate land for soy farming. For example, conservation organizations are encouraging farmers to plant in areas of the savannah which are less bio-diverse, particularly areas which have already been altered by cattle ranchers.

Conservationists are also working to increase agricultural productivity. Unlike in the US and China, Brazilian farmers and cattle ranchers have plenty of scope to make their operations more efficient.

For example, Lovatelli notes that ranchers in Sao Paulo, the most developed state in Brazil, raise two to three head of cattle per hectare of land. The ratio of cattle to land in other areas of Brazil is much lower, meaning more land must be used to raise each cow. If ranchers could increase efficiency to Sao Paulo levels, they would free up the equivalent of 35-40 million hectares of pasture land for agricultural use, which represents about 70% of the total farming land in use today. This would allow for the expansion of soy production without clearing any virgin land.

Such behind-the-scenes productivity improvements for soy, ranching and other areas of agriculture will be critical for protecting the Cerrado, because conservationists understand that a public pressure campaign similar to the 2004 push by Greenpeace and the WWF to protect the Amazon is unlikely to work. “One of the problems we face is getting people interested in [the Cerrado], because it isn’t a forest,” said Clearly of the Nature Conservancy.

Even so, many activists, including Clearly, are hopeful that damage to the Cerrado can be kept under control. Thanks to both legislation and the ABIOVE/ANEC moratorium, it is now more or less obligatory for major soy traders to work with conservationists in the country. He noted that environmental organizations are “on top of the problem” in Brazil – in contrast to other Latin American countries such as Paraguay, where expanding soy production is a much bigger threat to the environment.