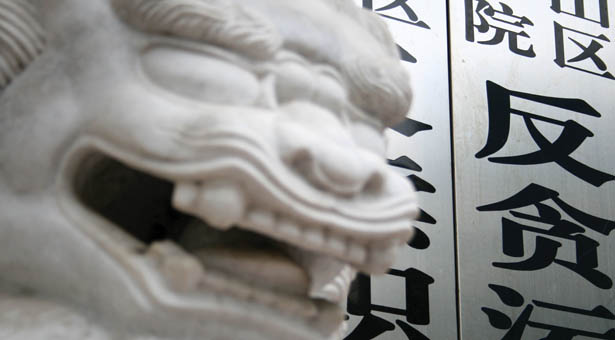 Strong arm of the law

Penalties for violating anti-bribery laws in the US and UK may be harsh, but they have yet to include capital punishment. The same cannot be said of China: In November 2011, the former head of Shanghai Pharmaceutical Group was handed a death sentence for embezzling RMB50 million (US$7.9 million), though the sentence was later suspended.

Such extreme punishments for corporate wrongdoers might be an effective deterrent in other countries. In China, however, politically motivated and patchy enforcement often undercuts their effectiveness.

China’s current law governing corruption among businesses – as distinct from traditional official corruption – was effectively created in 2006. State media announced that scores of officials and business executives had been arrested and billions of yuan recovered, all thanks to powers granted by the new law.

“[Authorities] were suddenly dealing with about 6,000 cases [of commercial corruption] a year,” said Andrew Wedeman, a professor of political science at Georgia State University and author of a paper on the crackdown.

But it was clear that the new regulations had simply shifted some of the blame for corruption from government officials to corporations. While the number of commercial cases had risen, overall incidents of corruption appeared to be about the same, Wedeman said.

“If you actually look at the statistics, it’s actually clear that they were dealing with about 6,000 cases a year before that,” he said. The government had simply re-classified cases that were previously labeled as official corruption – especially involving state-owned enterprises – as commercial corruption.

For example, the law says companies cannot use “property” to “pursue improper gain.” But China’s definition of “property” stretches well beyond that of other countries and can be used to prosecute even benign transactions, said James Xu, a lawyer at Sunjun & Associates who works on commercial corruption cases. “The vaguely-defined and subjective criteria create a dilemma for what constitutes bribery and the punishment,” he said.

Some ambiguity in the law is intentional. A Supreme People’s Court opinion issued in 2008 said judges should be given leeway to determine the definition and penalty for bribery, depending on the specific circumstances of each case. Flexibility in corruption laws is hardly unique to China, and it can work well in countries with an independent judiciary. In China, however, it paves the way for partial and politically-motivated enforcement.

In addition, agencies charged with enforcement can pick and choose who to target. Companies in sensitive industries, such as pharmaceuticals and healthcare, have been subject to disproportionate scrutiny in China, as have foreign companies. Of the 500,000 corruption investigations undertaken in China between 2000 and 2009, 64% involved foreign companies, according to a 2010 study by Anbound Group, a Beijing-based consulting company.

In extreme cases, local authorities have raided the offices of foreign firms and accused them of commercial corruption, then asked for a bribe to make the problem go away, said one Shanghai-based due diligence expert, who asked not to be named for fear of recrimination.

Because corporate kickbacks and bribery are so pervasive, Beijing likes to hand out severe punishments to perpetrators it does catch in order to “send a message” to the market, Thomas Shoemaker, head of China practice at law firm Pillsbury Winthrop Shaw Pittman, wrote in a note to clients.

But if enforcement remains sporadic and politically driven, it is unclear what message is being sent.