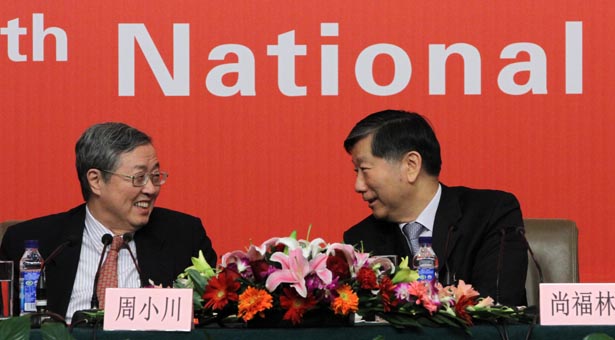 “Grim,” was the word Commerce Minister Chen Deming chose to label China’s trade outlook. Chen and other Chinese officials reacted to the November 9 release of positive economic indicators for October with a heavy dose of skepticism. “We are still continuing to deal with [the European debt crisis],” warned central bank Governor Zhou Xiaochuan. “We still can’t relax,” economic planning chief Zhang Ping said, adding that the foundations for the country’s recovery are still weak.

The tendency for caution among officials may come as a surprise, as economic indicators for October outpaced analyst expectations virtually across the board.

Exports rose 11.6% in October, outpacing the 10% increase predicted in a Bloomberg survey of economists. Retail sales were also buoyant, with a 14.5% year-on-year increase, while industrial production appeared to be reviving, expanding 9.6% to beat analysts’ predictions.

“What a lovely dataset to welcome in China’s new set of leaders,” research firm IHS said of the figures published during China’s once-a-decade leadership transition.

The lack of cheer among officials has not affected investors, who are at their most optimistic since July 2009, a November survey of Asia’s fund managers by Bank of America-Merrill Lynch showed. According to the survey, 51% of those polled are confident China’s economy will improve in the next year.

In mid-November, the renminbi strengthened to a nearly 20-year high as investors brought their capital back to China.  Many commentators have touted the rosy figures as the beginning of an economic upswing.  Analysts at Bank of America-Merrill Lynch expect strong export figures to boost GDP growth to 8.3% in the first quarter of 2013, up from 7.4% in the third quarter of this year. HSBC believes the increase in Chinese bank lending will continue to accelerate consumption and investment spending and predicts 8.6% growth next year.

But Chinese officials like Chen and Zhou are tempering expectations for a reason, and investors should take note. Strong exports in October should be weighed against a poor turnout and weak sales at the November session of the Canton Fair, a trade fair in Guangzhou that is often seen as a barometer for the country’s international trade. Orders placed at the fair fell 13.8% year-on-year, an ominous sign for future exports.

Then there are the external risks. Euro zone instability poses a serious risk to China’s economic rebound, as Zhou identified. Exports to the EU, China’s largest trading partner, fell 8.1% year-on-year in October, after a fall of 10.7% the previous month. The US fiscal cliff also looms over China’s growth prospects. If unchecked, tax hikes and public spending cuts next year could weaken a crucial trading partner.

China has started gearing up domestic consumption to counter the volatility of overseas demand. The government has introduced subsidies for a myriad of consumer products from electric cars to eco-friendly washing machines, in an attempt to bolster spending. But this strategy will only succeed if Chinese consumers pick up the mantel, and that remains far from certain.

Given the propitious timing of the figures, just before Beijing’s 18th Communist Party Congress, Chinese officials could have chosen to trumpet an unreservedly positive spin of the data as a national triumph. Their measured responses warn that now is not yet time for unbridled optimism. Investors would be wise tofollow their lead.