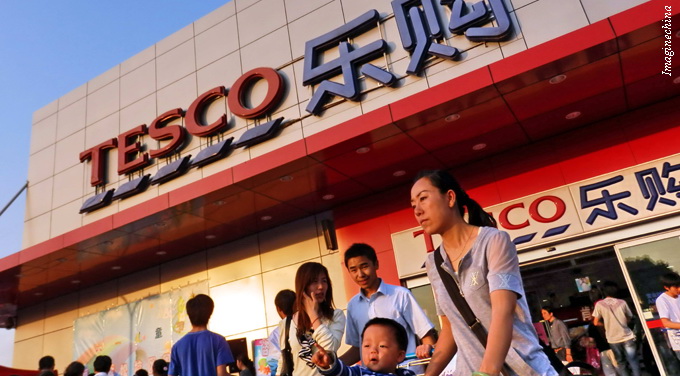 China’s 1.4 billion or so mouths to feed are a tempting proposition for international grocery retailers hungry for growth. Incomes are rising, logistics infrastructure is good and unlike places such as India, foreign brands are welcome to compete in the domestic supermarket sector.

Leading Western chains have charged into the market, going head-to-head against regional rivals from South Korea, Taiwan and Japan as well as local chains. Nevertheless, many have struggled to adapt their operations to local conditions. Last week, British retail giant Tesco signalled it is considering ending its nine-year solo run in China by entering talks with a partner.

Should a final agreement be reached, Tesco would fold its 131 China-based stores into the supermarket unit of China Resources Enterprises (CRE), the listed arm of state-controlled China Resources Holdings.

The announcement has thrown the massive but not well known conglomerate into the business pages of the Western press. It also casts a spotlight on how Chinese retailers are using M&A to expand their footprint in the world’s biggest grocery market.

Compared to Europe or the US, China’s supermarket industry is highly fragmented.

An array of retailers of various sizes sells groceries. Some are chains, most are independent; none have managed to establish a dominant position. Sun Art, a tie up between Taiwan-based conglomerate Ruentex Group and France’s Groupe Auchan, is the biggest supermarket chain in the country but is has a market share of only 13.6%. By contrast, Tesco, the UK’s leader, has around 30% of the market in its home country.

“One of the reasons that the [grocery] market is so fragmented is because China is so damn big, Torsten Stocker, a partner at consultancy AT Kearney, told China Economic Review. “Historically, you had a lot of retailers that existed at the very local level or provincial level and everybody [big and small supermarket chains] is still expanding.”

Foreign groups have a major presence in big cities in eastern and central China, operating mostly in the hypermarket segment.

Wal-mart has the biggest branded presence of the multinationals, with more than 380 stores; Carrefour has over 218 outlets.

The leading Chinese supermarket chains operate across multiple formats, from bigger stores to mid-sized supermarkets and smaller units, giving them a much deeper presence. Lianhua Supermarket Holdings, the biggest grocery chain on the mainland, has more than 5,150 stores. CRE’s CR Vanguard supermarket unit has almost 3,000.

No retailer wants to fall behind in a grocery market that is projected by consumer research firm IGD to grow in value from US$1 trillion in early 2013 to US$1.5 trillion by 2016.

CR Vanguard has been expanding aggressively. Between 2001 and the end of 2010 it closed six acquisitions. In 2011, the company snapped up Jiangxi Hongkelong. Complementing its acquisition-led expansion, the company is building up high-end brands BLT and Ole that sell imported foods to chase higher margins.

“You can see that they always put market share as the top priority,” when considering an M&A deal such as the one with Tesco, a Hong Kong-based retail analyst, who declined to be named, told China Economic Review.

CR Vanguard is now adjusting to the slowing Chinese economy. Up until the end of last year the company had been expanding in China through targeted store openings, in line with the practice of many retailers, said Jon Copestake, chief retail analyst with the Economist Intelligence Unit in London. “This tie-in with Tesco may reflect a more considered approach, using the Tesco store network as a means of expanding penetration without incurring significant risks or costs.”

The Hong Kong-based analyst agreed, noting that in 2013 CR Vanguard has eased the opening of new mass market and high end stores from the pace recorded in the previous couple of years.

“The sector is likely to see consolidation, partly as retailers begin to look for opportunities in smaller chains to extend presence, rather than through costly organic store openings,” said Copestake.

Lower-tier cities where incomes are rising offer retailers the chance to move away from the cutthroat competition in big cities that are increasingly saturated, market research firm Euromonitor noted in a January report.

This will favor enterprises such as CR Vanguard that have adopted a multi-format approach to provide retail options tailored to regional market conditions. “If you look at their track record, they are interested in doing M&A in different sectors,” said the Hong Kong-based analyst.

CR Vanguard’s expansion strategy is paying off. The firm overtook Wal-Mart as the second-largest supermarket chain in China by share of the urban market in the quarter ending June 14, according to consumer research group Kantar Worldpanel.

Other acquisitive Chinese retailers include Balian Group, which is also seeking expansion through M&A. Lianhua Supermarket has a strong track record in buying out other chains, for example the notable purchase of Hualian Supermarket in 2008 that added almost 1,400 stores.

More partnerships such as the one being considered by Tesco is also potentially on the cards as it provides good access for foreign and local brands, according to Andrew Walters, chairman of consultancy China Retail Group.

One target could be Carrefour and its 206 China stores. The retailer has been linked with a disposal or merger of its China assets for a while, something the company strenuously denies. Should the French giant decide to hook up with a local, there would be a queue of suitors.