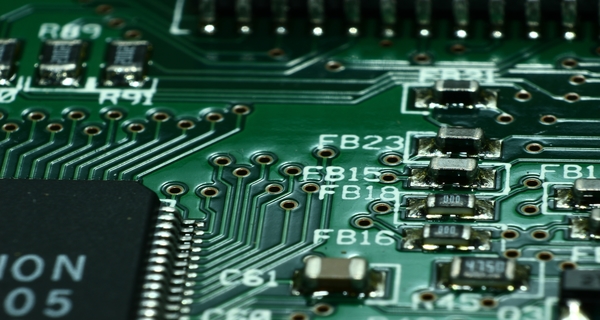 The trends feeding the growth of China’s tech industry

China’s tech sector saw huge developments in 2017, and spending on tech here is predicted to grow 8% in 2018. Here we look at some of the reasons why and how: expect to see continued overseas development in part due to the government’s Belt and Road Initiative; customer service will become critical as changing customer life-cycles in digital businesses show signs of maturity; ecosystems will reign supreme, and even currency shifts will have an impact. Meanwhile, companies will have to find a balance between resource allocation and talent acquisition.

According to Forrester’s “China Tech Market Outlook, 2018-2019”, China’s technology spending could reach $234 billion in 2018, up 8%. Much of this is due to the pursuit of reform in China and strong growth in software, consulting and outsourcing. We looked at various predictions and spoke to Forrester’s analyst Charlie Dai about factors affecting China’s increasingly global tech industry.

Perhaps we should have been paying more attention to the impact the government’s Belt and Road Initiative (B&RI)—the project that aims to re-energize China’s ancient trading paths—is having on tech. We have already covered how it may help the export of Chinese tech firms’ business models and sharing economy. The report shows, however, that from a more macro perspective, changes attributed to this project are impacting tech much more: China’s tech market growth isn’t just about its tech companies.

Beijing’s financial policies have reduced the speed of the renminbi’s devaluation, reducing costs across the supply chain. The B&RI has, according to the report, made substantial progress in terms of “helping China turn the excess capacity of its traditional industries into business growth.” In October 2017, the World Bank increased its forecast for China’s economic growth from 6.5% to 6.7%. These macro-level changes, combined with increasing competition at home, mean a wide range of industries are looking to tech-up. Their use of new technologies to improve their efficiency is part of a push for what Charlie Dai calls their “digital transformation.” 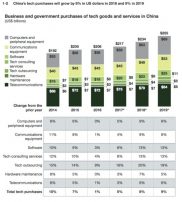 How tech spending is forecast to grow in China. (Image credit: Forrester)

“As a critical national strategy, B&RI will effectively help China turn excess capacity of traditional industries into business growth,” Dai told TechNode. “Along this journey, technologies like cloud, e-commerce, AI and IoT will play a critical role to accelerate digital transformation and build up digital ecosystem of enterprises, organizations, and governments across continents.”

This will translate into stable hardware sales, but also growth in consulting services, software and outsourcing.

Tech as an enabler at home and abroad

China’s tech companies will continue to fuel growth for other areas of China’s economy as they pursue international expansion plans.

According to Forrester’s data, emerging technologies will be the building blocks of digital businesses through their reform and digital transformation. 66% of business decision-makers in China are planning to improve their use of data and analytics; 62% will increase their use of cloud services; 59% will use IoT to develop smart products or connected assets; 58% will invest in AI and other cognitive technologies.

Dai told TechNode: “Overseas expansion will provide great opportunities for Chinese tech companies to drive business growth and gain strategic advantages for long-term evolution. However, it will also challenge the strategic planning and operations capabilities of executive teams to strike the right balance in talent acquisition and resource allocation.”

Talent acquisition has been an issue for many of China’s tech firms, to the extent it’s one of the reasons companies such as Baidu and Tencent have set up research centers abroad.

Partnerships with tech firms will become critical for enabling the digital reform of other companies–both domestic and international. China Unicom used mixed ownership reform to revitalize its business, starting with cloud services, via an $11.7 billion investment from the likes of Baidu, Alibaba, and Tencent. Ford partnered with Alibaba to increase sales in China through e-commerce.

It’s not just about big investments. Gordon Orr of McKinsey, in a note on the outlook for China this year, wrote that smaller investments and political changes around the world will impact the tech sector’s development:

“The international reach of China’s tech companies and investors grew and grew [in 2017] with myriad, often minority, investments too small to show up in national statistics but that gave companies access to innovative technology and business models to scale in China. In 2018, a lot more attention will be paid to global Chinese investment in these fin-, med-, and edtech and AI start-ups, with political pushback in the United States, leading them to focus more heavily on Israel, Scandinavia, and the United Kingdom. De facto, many Chinese investors will simply assume that they could not get approval for investment in the United States and so won’t try. If US–China economic relations deteriorate significantly, we even might see real pressure to break up deals consummated in years past.”

Chinese tech firms are pushing technological advancements around the world, and more collaboratively. Baidu’s Apollo driverless car platform is accelerating development in the autonomous vehicle sector in China and overseas. Again, Baidu joined Hyperledger to work on blockchain uptake. Huawei and ZTE have been working IoT and 5G development and standards, which we can expect to see more of.

Hard to soft and outsourcing to impress

There will be a continued shift of investment from hardware to software and services. This does not mean hardware has had its day. Its declining growth rate in 2017 will stabilize in 2018 and 2019. Developments in AI-enabled hardware and IoT products will require continued spending. In addition to this, the Forrester report found business demands will see a shift from commodity hardware to software and services.

Spending on some software and services directly reduces the need for spending on hardware by some companies. Rather than buying more of one’s own servers, a company can save money and gain flexibility by using cloud services.

A report by Dezan Shira & Associates published in December 2017 found foreign direct investment (FDI) in China’s high tech services grew 100.9% in the first 11 months of last year, to $26.43 billion. Within that, there was 167.1% growth in information services FDI.

Dezan Shira & Associates “China Industries Outlook 2018” shows that in general FDI was down in manufacturing, but up 9.9% year on year to $8.98 in high-tech manufacturing, with medical device investments up 27.8%.

“These trends confirm some of the changing dynamics in China’s economy. As industries are losing their competitiveness in low-cost manufacturing, it demands more high-tech support to increase its productivity and transition from manufacturing-centric growth towards service- and consumption-based growth,” states the Outlook. 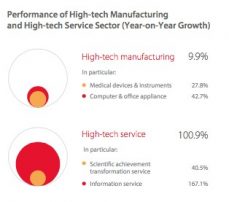 Software is now a core element of customer interest in a product. It is significant enough to form an integral part of customer experience throughout the customer life-cycle. This is the cycle that takes someone from discovering a product, through to buying and advocating about it.

Customers crave better and more novel experiences. In order to secure an edge for their products, firms outsource tasks such as experience innovation. The prediction for this category is growth of 20% in 2018 and of 13% for tech consulting services.

General software spending is expected to be up five percentage points on 2017, meaning growth could reach 13% in 2018. This is down to cloud computing, applying AI to company data, IoT within manufacturing and continued explosive growth in e-commerce.

Alibaba Cloud saw 99% growth year-on-year in Q3 2017 according to the report. Amazon Web Services pushed ahead in China and Microsoft’s Azure Stack is expected to arrive in 2018.

Charlie Dai told TechNode that, “for digital businesses, the maturity of technologies should be evaluated across customer life-cycle. Therefore, the more fine-grained, insight-driven and sustainable digital services there are in the sector, the more mature the sector would be.”

2017 seemed to be the year of the ecosystem. Every company had one, with BAT being the noisiest about how theirs worked. “The digital ecosystem has become a critical pillar for digital businesses in the age of the customer. Chinese tech firms should strategically seek collaborations with other players in both Chinese and global markets in various areas, such as technologies, vertical solutions, professional services and channel distributions,” explained Dai.

More ecosystems may appear for different and more niche sectors and technologies. But there’s still room for continued growth in the now mature ecosystems such as those BAT built. This is because, according to Dai, “The evolution of emerging technologies like artificial intelligence and blockchain is still in the early stage.”