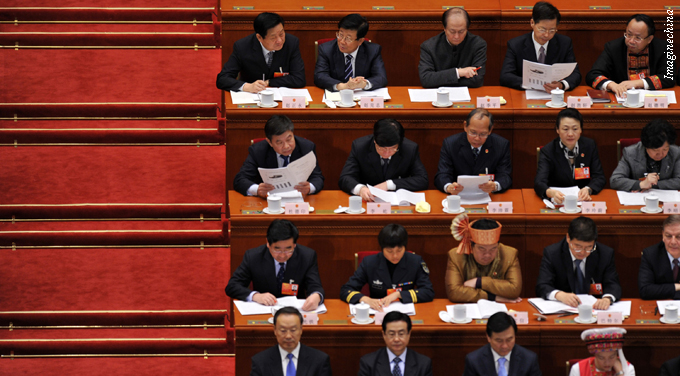 When the doors of the Great Hall of the People swing open in October for the Third Plenum of the 18th Central Committee, expectations of changes to the nation will amplify. Reform is on everyone’s mind.

Indeed, China’s top leaders, scholars and advisors will assemble to mull a gamut of economic and political concerns, many pressing. There may even be a policy statement or two.

Outside of that, though, little else can be said of the high-profile meet with any degree of certainty.

An extraordinary amount of speculation surrounds this session. Third plenums of the past have in no small way influenced expectations for this year’s event. In 1978, the plenum birthed China’s Reform and Opening and signified an end to the Maoist years. Fifteen years later, the Third Plenum unleashed market reform, sowing the seeds of private enterprise in the country.

In the buildup to this plenum, 20 years after the last, discussion on further changes to China’s social and financial framework are boiling over. The Communist Party’s investment-driven growth model is faltering and the mainland economy is slowing. As bad credit mounts, some local governments teeter on the edge of insolvency. This all points toward the hard truth that reform is far from finished.

The world won’t know for sure until October if the plenum will be a venue for big change. Economists say they will prick up their ears for word on state enterprise reform, or of the hukou system, which is hindering the urbanization process. Others have pinpointed the event as a launching point for a comprehensive plan on liberalizing the renminbi. More than a few experts are skeptical that anything of much importance will happen.

The precedents for the political event are hard to ignore.

In December 1978, Deng Xiaoping emerged as China’s top leader during the Third Plenum of the 11th Central Committee, after wrestling the reins of power from Mao-successor Hua Guofeng. The shakeup signified an end to troublesome Mao era politics such as continuous class struggle and colossal industrial investment. It was, in effect, the first ray of light in the opening of the country after 30 years of isolation.

The Third Plenum that opened in November 1993 was comparably epic. Still reeling from a conservative backlash brought on by the Tiananmen protests in 1989, the session adopted a decision on establishing a “socialist market economy,” leading to sweeping reform of the tax system, banking sector and state-owned enterprises (SOEs). In the 35 years since the start of reform in China, leaders have passed few other economic packages matching its significance or scale.

This October, analysts won’t be looking for the same signals. Li Wei, a China economist at Standard Chartered in Shanghai, said the absence of large-scale reform doesn’t indicate that China is stagnating.

The nature of reform itself has evolved along with the economy, and the newest generation of policymakers is better attuned to the subtleties of what is going on around them. Leaders such as Li Keqiang are focusing on responding to daily changes in the country rather than drafting grandiose plans as their forebears did, Li Wei said over the phone last week.

“It’s probably not as easy as 20 years ago, when China was largely just a centrally planned economy,” he said. “So having a plan for the next five years isn’t probable. But that doesn’t mean you can’t have some concrete evidence of Beijing’s decisiveness to reform.”

A touchstone for reform this autumn will be the government’s attitude toward SOEs, Li Wei said. Selling off some of the strategic assets of state firms would mark a step toward reforming the inefficient companies that crowd out smaller players from the market. Allowing bankruptcies at small state-managed firms and banks is another potential signal for reform.

New York University professor and Nobel Prize-winning economist Michael Spence agreed that the major issue at hand was the role of state firms in the market.

“The state balance sheet may still be big and remain large, but the assets should be managed to complement and support the markets, via public sector investment and transparent regulation… not to restrict competition, access and cause distortions,” he said in an email to China Economic Review.

Along with reform to industry and SOEs, policymakers will likely target urbanization and financial reform. Most economists agreed that these would be the economic focus of the plenum. The hukou, China’s household registration system, will no doubt be discussed at the meeting, said Zhou Hao, a Shanghai-based economist at ANZ Bank.

The media has buzzed with talk on hukou reform for months and changes are expected. At present, the system stops rural residents from getting benefits such as education and health care when they move to cities. Scaling it back and making it easier for migrant workers to transition to the city is necessary if China wants to continue a relatively smooth urbanization process.

However, much like other areas of reform, it’s unclear if changes to the system will be substantial. “I’m not very sure if the government will have a radical or gradual reform agenda during this meeting,” Zhao said over the phone last week.

Other observers will be waiting for a more finely tuned message during the plenum, namely word on the liberalization of the renminbi. In a note from Citi Research in late May, the bank’s head of Asia Pacific market analysis Huang Yiping said senior government officials and policy advisors were working on a reform plan for the convertibility of the yuan.

“We would expect a draft program … to be presented for approval to the Third Plenum of the Central Committee of the Party in the autumn. If things progress smoothly, we could see some breakthrough steps from early 2014,” the note said.

Citi isn’t the only bank that expects some action on the liberalization of capital accounts to come in October. Alex Fuste Mozo, chief economist at Andorra’s Andbank, is betting on some form of reform to the capital account at the Third Plenum simply because China is running out of options for the currency.

Fuste Mozo has been tracking the usage of the yuan to settle accounts in emerging markets. This year, about 17% of those transactions will be done in China’s currency. Within five years, he projects that figure could hit 40%, “a condition that would require the [yuan] to be fully liberalized,” he said in an email.

Those are high hopes for a meeting shrouded in such secrecy.

During the past month, the outlook on the plenum has deteriorated in the eyes of some China watchers. Or perhaps experts have simply weighed in on the rampant guesswork abound, stamping out hopes and highlighting how the party and government have taken care of business for the last two decades.

“I don’t expect that the Plenum will have some massive revolutionary statement,” Kerry Brown, director of the China Studies Centre at the University of Sydney, said in an email last week. “That would be alien to the very gradualist political environment that Chinese leaders operate in.”

Instead, the session will largely be a venue for underlining and reinforcing some of the policies the new political lineup has already introduced, such as Xi’s crackdown on corruption, Brown said.

Those hoping the plenum will galvanize piecemeal economic reforms into comprehensive policy should brace themselves for disappointment. Lu Ting, lead China economist at Bank of America Merrill Lynch, said in a note last week that the new gover
nment will need more time to consolidate its power base before it can attempt real change.

In the past the meeting may have marked some of the biggest moments in China’s recent economic history but, Lu said, “it does not mean the once-in-every-five-years third plenary party session should always be significant.”