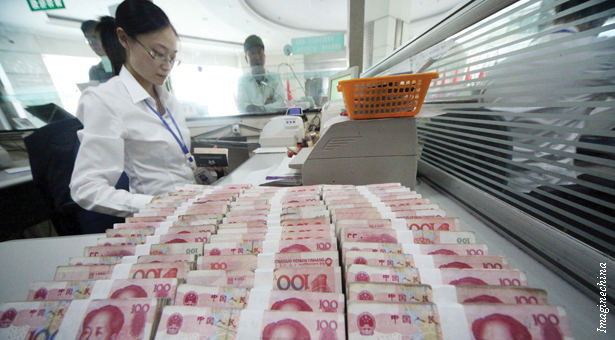 Taipei doesn’t have much on international financial centers such as London or Singapore. But the two global business hubs will very likely lose ground this year to the Taiwan city as it makes its first foray into yuan trading.

The Central Bank of Taiwan early last month allowed 46 banks on the island to take deposits and make loans and remittances in yuan, with more than US$200 million in the Chinese currency reportedly surging into retail accounts on the first day.

Seeing advertisements for the yuan in Taipei may elicit conflicting feelings among those who were in Taiwan decades ago, the Financial Times noted with the opening of the market. For many years, images of China’s great helmsman Mao Zedong – whose face is featured on the note – would have been strictly in protest of the leader.

But the times are changing. Given the strengthening business relations between China and Taiwan, the mainland’s largest trading partner, it’s understandable why businesspeople there want to hold the redback.

“There is so much more cooperation between the two,” said Cindy Qu, a senior analyst at Z-Ben Advisors in Shanghai. “[This market] will be expanded, and it will take on some of the renminbi pool in Hong Kong.”

Liquidity in the new Taiwan yuan market is low at present with a pool of about US$2.7 billion (RMB17 billion) in deposits, Qu said. But that figure is set to soar by the end of the year to as high as US$24.1 billion (RMB150 billion), according to a recent report from Standard Chartered. Analysts project that Taiwan will overtake London and Singapore as the second-largest market for offshore yuan after Hong Kong by the close of 2013.

Chinese regulators could give Taiwan financial institutions the ability this year to invest RMB100 billion in the mainland under the Renminbi Qualified Foreign Institutional Investors, Qu said. RQFII allows foreign investors to invest offshore yuan into mainland securities and other financial products. Opening the RQFII gate would reconnect the island market with the mainland “enabling faster adoption of the renminbi for cross-straits investment purposes,” the Standard Chartered report said.

Taiwan’s banks have also started issuing so-called Formosa bonds, or a yuan-denominated bonds that borrows a name given to the island by Portuguese explorers centuries ago. As of early March, they had issued US$10.3 billion (RMB64 billion) in the signature bonds, or about 22% of total issuance in offshore yuan in 2012, according to a Standard Chartered report released last week. That’s rapid growth for a market that has only been in existence for little over a month.

Some analysts have said the low yield on the bonds will keep away international investors for the time being. Bloomberg even quoted a Taiwan-based analyst who shunned the bond on account of the low rate, about 2.9% for three-year products issued by Chinatrust Commercial Bank as of late February.

But that’s far better than Taiwan dollar-denominated bonds, which have some of the lowest appreciation rates in Asia. “Local banks and securities firms are happy to buy anything that has better returns than Taiwan dollar bonds,” Steven Huang, an HSBC Global fund manager in Taipei, told Bloomberg. But international investors will no doubt continue to prefer dim sum bonds in Hong Kong, where the rate was more than 3.3% at some banks last month.

Outside of investment circles, the trend has gone largely unnoticed by mainland Chinese, who through the 1990s and 2000s have flinched at every twist in sticky cross-strait relations. But the renminbi’s appearance in Taiwan should be regarded as a milestone in the financial integration of the mainland and the island, as well as a solid foundation on which a new generation of mainland leaders, who assumed office last week, can engage their Taiwan counterparts.