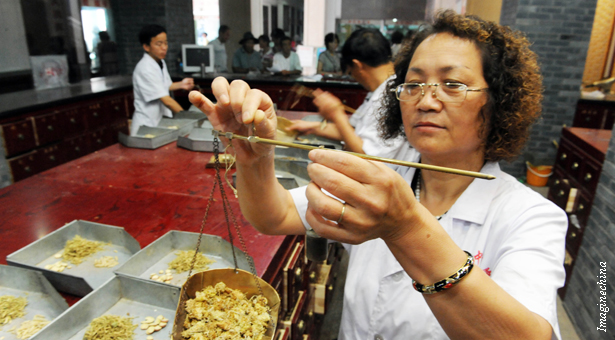 Chinese have been using the green and leafy andrographis paniculata to treat inflammation, fever and pain for decades, with its cultivation dating back to at least the 1950s in the southern province of Guangdong.

The plant, better known in China as chuan xin lian, is widely accepted in China. But like many traditional medicines, it has mostly been relegated to an over-the-counter herbal supplement in the West. The uses of so-called traditional Chinese medicine (TCM) such as andrographis (technically native to India) are generally viewed as speculative at best in much of the rest of the world.

The plant may be on the verge of newfound and widespread use in a form more palatable to Western markets like the United States, however.

The US Food and Drug Administration (FDA) opened up a new pathway for approving botanical drugs in the mid-2000s, and Hong Kong-headquartered Hutchison China MediTech intends to be one of the first companies to walk down it. The company has created drug HMPL-004 derived from andrographis to treat Crohn’s disease and other gastrointestinal inflammations. The drug is now in the final phase of clinical trials and could be ready for sale in three or four years.

“What we wanted to do was really understand traditional Chinese medicine on kind of a molecular level,” Christian Hogg, CEO of Hutchison China MediTech, told China Economic Review. “[We wanted] to go beyond all of the folklore and all of the charlatans that existed in TCM and really understand what was the efficacy, what was the safety, what therapeutic areas is it highly effective in.”

Spoonful of sugar, and profit

A small handful of new drugs such as HMPL-004 are in development that could put traditional Chinese medicine into a form more palatable in the West.

Hutchison is also exemplary of how multinationals are increasingly attracted to the booming TCM market. The company first entered the traditional Chinese medicine market in 2000 and then partnered earlier this year with a subsidiary of Swiss food maker Nestle on the drug.

“As multinationals begin to have success, the blanket dismissal of Chinese medicine is probably going to go away,” said Helen Chen, a director and partner at LEK Consulting.

The domestic market for traditional Chinese medicine alone should be enough to make Western drug firms salivate. The industry is now worth roughly US$55.9 billion (RMB342.6 billion) as of 2012, up from US$10.9 billion, according to statistics compiled by Roland Berger Strategy Consultants.

Traditional Chinese medicine represents 38% of pharma sales as of 2012. “If [Western drug companies] are talking about China but not doing TCM, they’re losing about half the market,” said Bruce Liu, a partner with Roland Berger.

Liu said he expects the market to continue to grow at about 17% a year.

In addition to opportunities to bring drugs like HMPL-004 to the West, Hogg said this booming domestic market played a large part in attracting Hutchison to TCM. The company operates several lines of business in China, including joint ventures, and its total sales are now US$407.8 million.

“It is a massive, massive part of the pharmaceutical industry in China,” Hogg said. “It goes extremely deep. It is part of the national mind set and belief system.”

In the West, traditional Chinese medicine faces an uphill battle toward widespread acceptance. Chun-su Yuan, a medical doctor and editor-in-chief of The American Journal of Chinese Medicine, has spent more than 30 years in the US but has only seen attitudes toward TCM change in the last five to seven years.

Yuan, originally from mainland China and now director of the Tang Center for Herbal Medicine Research at University of Chicago, said that the rapid economic development of China has drawn attention to TCM. The Chinese government has also encouraged research into Chinese medicine, driving up the number of academic papers on the subject and thus warming the Western medical establishment to TCM.

Traditional Chinese medicine accounts for less than 5% of the US$10 billion in sales within the broader category of over-the-counter herbal medicine (generally not subject to FDA approval) in the US, Yuan estimates.

But awareness and acceptance is only growing slowly, he said. The majority of Western-trained doctors still do not believe in complementary alternative medicine, including TCM, because of a lack of controlled studies. A small segment, less than 10%, “love” Chinese medicine.

“There is a lot of skepticism among physicians, health care professionals in the US and this somewhat prevents the development of herbal medicine or Chinese medicine in this country,” Yuan said.

Chinese medicine will need to win over Western doctors the same way most pharmaceuticals do: through rigorous clinical trials.

The FDA gave “botanical” drugs an avenue for approval in 2004. Since then, only two drugs have been approved and only one based on TCM, called Veregen. That drug, based on green tea extract, is used to treat warts.

In addition to Hutchison’s HMPL-004, a handful of other TCM based drugs are in the pipeline. Among them is Tasly Pharmaceutical’s drug Dantonic, made from extracts of a plant in the mint family and another that is related to ginseng, intended to treat the heart condition angina pectoris. The Chinese company’s drug is currently in phase III FDA trials.

The drugs will have good sales prospects if they gain FDA approval, said Liu of Roland Berger.

Outside of the US, the Netherlands granted approval to an herbal medicine developed by Chengdu Diao Pharmaceuticals Group to treat a certain type of heart condition in March 2012, clearing the way for broader entry into the EU.

Pharma companies could particularly look to TCM as a source for developing drugs to treat chronic conditions where Western medicines haven’t been entirely effective, he said. That could include applications for central nervous system and cardiovascular diseases. “[TCM] could potentially be a treasure island for drug discovery,” Liu said.

As yet, only a few companies are attempting the difficult feat of taking TCM-based drugs down the FDA path to approval.

Several sources expounded on exactly how difficult it is. Many chemical drugs are based on individual compounds found in nature. Most of these have already been discovered.

Botanical drugs by contrast oft
en will be based on several compounds found in the herb the drug is derived from. But to gain FDA approval, the effects of every compound in the drug must be isolated, a challenging task. The company must also be able to prove that it can consistently produce these complex drugs to strict specifications.

For now, the FDA botanical drug pathway is suited for drugs that rely on, for example, five or ten compounds, Hogg said. That’s a number that the regulators can cope with.

But an herb could have hundreds of compounds in it, Hogg said. The botanical-based drugs under consideration are a critical step beyond single-compound drugs that could set up authorities to broaden to even more complex herb-based medicines later on.

“This is not going to be a broad-scale global expansion of Chinese medicine,” Hogg said. “What this is going to be is really identifying these substances that can work under these new regulatory guidelines and that will be the first sort of wave of it.”