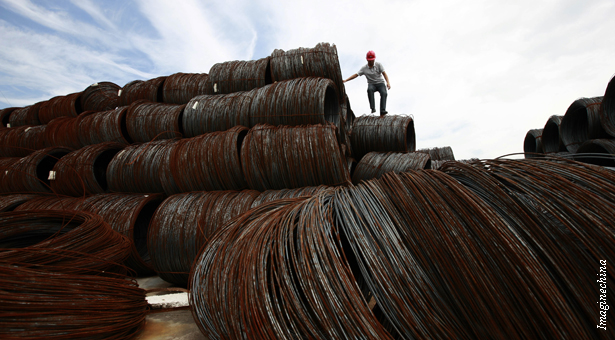 China’s top leaders gathered together on Thursday for what state media called a “special session” on the economy. Led by Communist Party General Secretary Xi Jinping, the seven members of China’s highest governing body discussed how the country could ensure continued steady economic growth and stimulate domestic consumption. They parted ways agreeing to boost growth but to do so carefully, avoiding aggressive credit and investment growth that could bring on new financial risks.

These broad platitudes were in line with earlier remarks by top leaders, but there was a renewed sense of urgency following the release of disappointing economic data for the first quarter. While GDP expanded only 7.7% in the quarter, new credit was higher than expected. That indicated the country was earning less GDP bang for its stimulus buck, in the words of China strategist Patrick Chovanec.

Some people attributed slower growth in the first quarter to the Chinese government’s efforts to rebalance the economy – defined as increasing levels of consumption, lowering investment in real estate and accelerating growth in the service sector. “We need to sacrifice short-term growth for the purposes of reforms and structural adjustments,” central bank governor Zhou Xiaochuang said on April 20.

But a closer look showed that was not the case. The outlook for Chinese economic rebalancing actually worsened in the first quarter relative to the first half of 2012, Nicholas Borst, a fellow at the Peterson Institute for International Economics in Washington, D.C., wrote in a recent blog.

Last October, Borst and his colleagues identified five main indicators that they track to determine whether the Chinese economy is rebalancing: disposable income, real bank deposit rates, residential real estate investment, loans to small businesses and the growth speed of the service sector.

In the first quarter, two of the five indicators received negative marks: Urban disposable income grew slower than GDP, and residential real estate investment grew rapidly in the first quarter of this year, both signs of an increasingly negative economic picture. “One should not put too much stock in the data from any one quarter, but it is hard to make the argument that the Chinese economy is rebalancing quickly,” Borst wrote.

It’s clearly a bad sign that the government hasn’t begun rebalancing the economy, despite much talk of its necessity. But it’s still too early to condemn them for lack of effort.

Xi and his second-in-command, Premier Li Keqiang, took up the top government posts in March, too late to influence the course of first-quarter growth. These men clearly understand that their economic model is losing steam, and they are better positioned than their predecessors to make the necessary changes.

Xi also remarked at the Boao Forum in Hainan province in early April that China is looking to rein in growth to sustainable levels and balance economic prosperity with other issues such as environmental protection. And in his first press conference, Premier Li invoked “reform” more than 20 times. Li has repeatedly reiterated that reform has been China’s biggest dividend, writes Damien Ma, a fellow at The Paulson Institute in Chicago. “With many arguing inside China that the reform momentum has been sapped, the new leadership is clearly intent on reinvigorating it,” Ma wrote.

Cutting powerful vested interests off from cheap sources of capital will be a painful process. But most Chinese say Xi has the political courage and capital to pull off such a dramatic change. Xi has launched an ambitious corruption crackdown, and he is leading the government in a quiet and sustained effort to iron out local government debt problems and bring a ballooning shadow banking sector and wealth management products into the fold.

In addition, Xi looks more able than his predecessor to bring certain interest groups into line, such as state-owned enterprises. Political analysts say that the reduction this year of the Politburo Standing Committee from nine to seven members and the shift from a roughly 50-50 split between factions to a committee dominated by Xi’s princeling party will give him greater ability to enact more controversial reforms.

China does have sustainable sources of growth to tap, but the government must have political courage to scale back its controls on the economy. These reforms will include embracing creative destruction and allowing inefficient businesses to fail, argues Chovanec, the China strategist.

In a speech in Shanghai last August, Chovanec pointed out that the main driver of China’s growth since Reform and Opening in the late 1970s was not central policies, but the government merely getting out of people’s way – allowing them to sell their extra produce, start a small business or own their own property.

Liberalizing still-tightly controlled portions of China’s economy can bring similar dividends in the future. “There’s a huge amount of untapped potential in the Chinese economy if there is the courage to adapt and embrace it,” Chovanec said.

This will be an uncomfortable process, but there is no other good option. The rhetoric of China’s top brass shows they understand this, and they are trying to prepare their colleagues for the transition. Premier Li said much the same thing in a briefing at the Great Hall of the People in March. “It’s about cutting power, it’s a self-imposed revolution,” he said. “It will be very painful and even feel like cutting one’s wrist.”