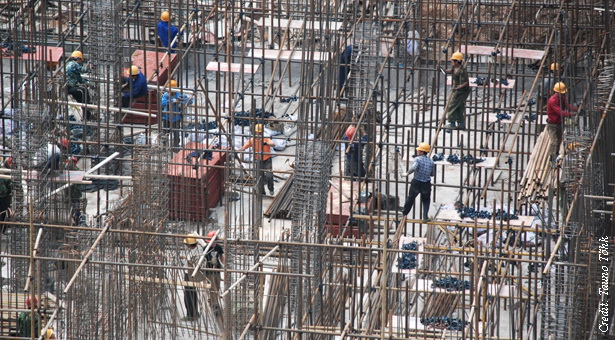 The official data won’t be out for another week but investors can bet that housing prices in July will have continued to rise in most of China’s biggest cities. An early survey this week from the China Real Estate Index System showed the prices for new flats in the country’s 10 biggest cities rose more than 10% year-on-year. Beijing saw the biggest jump of about 17%. Chinese property developers are naturally doing well; China Vanke (000002.SHE) on Tuesday posted a 22% profit increase for the first half of 2013 compared to the same period the year before. All this cheer in the construction sector beckons the question: When will Beijing step in again with more restrictive measures meant to cool the market? Probably not anytime this year, says Kim Eng Securities analyst Karen Kwan. The government’s promotion of urbanization and stability in the property market will likely keep policymakers from issuing harsh restrictions. However, if prices climb too quickly, Beijing may wield its monetary wand and tighten lending to property developers. “If anything, it’s more likely to be on the credit side,” Kwan said on Thursday from Hong Kong. Kim Eng has a buy rating on Shimao Properties Holdings (0813.HKG), among others. Don’t worry about surprise cooling measures for now; the sector remains a good buy.

When several foreign baby formula makers got caught up in a mainland price-fixing probe in June, China Economic Review said it was unlikely that the regulatory hit would brighten the outlook for domestic dairy firms. Last weekend, when the world’s biggest dairy exporter Fonterra said its whey protein could give consumers food poisoning, the outlook for Chinese firms that import the powder was no better. One of China’s state-back media outlets got it right this week when it said that these international blunders by the world’s biggest milkmaids won’t raise the credibility of domestic brands. Fortunately, there is some work being done on China’s home turf that could straighten up China’s dairy producers. The government says it will boost regulation of these companies, requiring them to own their milk sources and upgrade R&D spending. Macquarie Securities was confident that Beijing was pulling the sector in the right direction, projecting 13% year-on-year growth through 2017, according to a research report. The securities firm was bullish on China Modern Dairy Holdings (1117.HKG) and China Mengniu Dairy (2319.HKG). Investors should milk the internal changes in the industry.

Lifejackets can’t save everyone

A rising tide lifts all the boats in the harbor. However, the State Council’s pledge to improve access to financing for key shipbuilders announced earlier this week is unlikely to help privately held firms get their heads above the credit line. In a plan targeted at reviving the fortunes of an industry battered by the global economic slowdown and rampant overcapacity, Beijing said it would restructure major shipyards, halt capacity expansion projects and get banks to lend money to enterprises that will live through the downturn and emerge stronger and more competitive. Large state-owned enterprises, which dominate the industry and have seen their market share surge from about 52% in the second half of 2012 to about 74% in the first six months of this year will be the main winners, according to Lawrence Li, an analyst with UOB Kay Hian in Shanghai. As the government has not clarified exactly who is entitled to this credit, it’s unclear whether China Rongsheng Heavy Industries Group (1101.HKG), the country’s largest private shipbuilder that at the beginning of July appealed for financial support from the government, will get its lifeline. If it does, the company should have decent prospects going forward, Li said on the phone on Thursday.

August remains a quiet period for Chinese IPOs, with a small board listing in the works in New York with China Commercial Credit (tentatively CCCR.NASDAQ) and next week’s debut of Tonly Electronics (1249.HKG). With this lull in the market over the holiday period Hong Kong-based bankers might well be reading up on the Hong Kong Stock Exchange’s new regulation on sponsors that will come into effect on October 1 aimed at streamlining the listing vetting process.