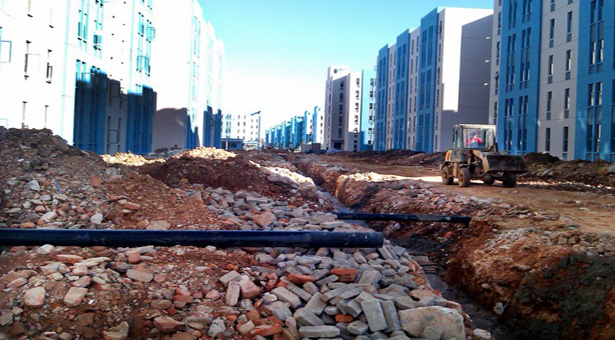 Property, traditionally a major source of wealth in China, now seems like a lose-lose prospect for investors. Restrictions on mortgages and purchases for those who already own a home are weighing heavily on the industry, with home prices hitting a 14-month low in April.

Many analysts and developers had previously expected the restrictions to be lifted in the first half of this year. Now they look likely to continue for the near future, possibly ending after the leadership transition late this year.

Greentown China has attracted investor and media attention as one of the biggest companies to be at risk from the current restrictions. The regulations are certainly battering Greentown’s business. The company focuses on high-end projects, which are now the target of efforts to squeeze speculative investment out of the market. It has also traditionally operated with high leverage, making it vulnerable in periods of tightened liquidity.

The company’s net gearing, a measure of overall indebtedness, soared to 195% by the end of 2011. As a result, Greentown became a short-selling target, sending its stock to a multi-year low of HK$3 in January. This prompted the company to begin selling off assets. It raised a total of US$591 million through five transactions between December and February. But while its stock price rebounded, Standard & Poor’s still cut its rating to CCC+ in April, citing refinancing risks in the next year.

Yet Greentown seems unlikely to end up in bankruptcy. It outlasted a similar dry spell in 2008, and its position is arguably better now, said Liu Yuan, a senior research manager for Centaline. Greentown is diversified nationally and benefits from connections in Zhejiang, a center of private lending.

Given the constraints they now face, developers have been remarkably resistant. As of mid-May, only three bankruptcies had been reported in the domestic media. Developers have found alternate sources of financing, including rich individuals and the financing arms of state-owned companies, and cut their land purchases. Liu of Centaline expects developers to be able to sustain their cash flow for another year by selling land or projects.

Still, Greentown is far from an ideal investment target. While some cash-rich developers are snapping up spare land plots, Greentown is struggling to make ends meet, meaning it won’t be as well-positioned to expand when curbs end. Investors would be wise to look instead to the companies that are buying up Greentown’s plots, such as Soho China. Nationally diversified industry leaders, such as Vanke and Evergrande, will also benefit as their competition is weakened – the only foreseeable bright spot in a currently lose-lose industry.