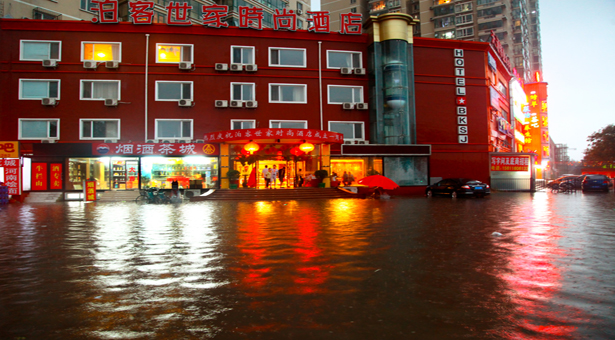 Torrents of muddy brown water surged through the streets of Beijing on July 21, turning them to deadly rivers. Beijing’s Forbidden City was saved by its 600-year-old drainage system, but much of the rest of the city was inundated. When the waters subsided, the heaviest rainstorm in 61 years had killed 79 people, affected 1.9 million others and caused US$1.6 billion in damage, according to city officials.

The destruction prompted many to ask why Beijing and other Chinese cities continue to lack basic drainage systems even after huge investments in infrastructure. The reason can be found in the structure of government and public finance, Ting Lu, China economist at Bank of America-Merrill Lynch, wrote in a note following the flood. While China has invested heavily in infrastructure, local governments are more willing to build high-return prestige projects than something as unglamorous as drainage systems, for two primary reasons. First, they lack financing; second, their career paths may depend on GDP growth and prestige projects. China Economic Review spoke with Lu about opening up bond markets to municipalities to provide a new source of financing and reforming performance measures that are excessively biased towards economic growth.

Why does Beijing lack basic infrastructure after having made such big investments?

There’s no incentive for local governments to spend money on that, and there’s no mechanism to finance these projects. For these local governments, the incentives mean that when they have the money from tax revenues they try to use the money for projects that boost their GDP growth potential, for example roads, ports and bridges. Moreover, there’s no such [financing] mechanism because for most infrastructure projects, local governments need to borrow money from banks to finance them. For profitable projects that is not necessarily risky, because they charge a fee and then can pay back the banks. But it is a problem for the slow-return or low-return projects, like drainage or sewage systems. When I say low return, I mean low return in the short term. Maybe those projects are profitable in the medium or long-term, or good for social welfare so people are willing to pay for it.

So local governments are not always able to fund these underground projects with bank loans?

It’s just like buying a home. Even if they can afford it, it’s very difficult for most house owners to buy houses with cash. They may pay a down payment, like 30%, and then borrow money from banks. The same is true for infrastructure investments. If you ask Beijing’s municipal government to spend a lot of money on a drainage system and pay in cash, that’s a big burden. But if the government can borrow to finance the drainage system, just like a 20- or 30-year mortgage with a relatively low interest rate, then maybe they can do it. For China’s local governments, however, there are no such financing channels. Local governments have built almost all of China’s urban infrastructure, and almost 90% of its national infrastructure. If the central government were to take responsibility for infrastructure, that would be okay because it can issue bonds. But unfortunately China is so big that it’s not practical for the central government to take care of all these structures.

Should those financing channels be expanded? You’re in favor of allowing local governments to issue bonds, right?

Does China already have enough infrastructure, or does it need more?

You’ve said performance measures are responsible for encouraging officials to build above-ground or visible projects. How do you think that should change?

That’s a very difficult question. GDP is still quite important, and I think it’s okay to have GDP be among the most important performance indicators. Eventually, of course, it’s about social welfare. In the last few years, the Chinese government has pushed local governments to build social housing. Going forward they can also force local governments to spend more money on sewage or drainage or other systems. For performance measures for local governments, especially low-level governments, maybe officials should be held more accountable to other people. Of course, in Western countries they call this democracy [laughs].

What are other potential sources of funding besides bonds and banks?

There are many other ways. One way is called BOT, BRO or BT contracts, meaning build-operate transfer, build-transfer-operate, or build-transfer agreements. These are cooperations between governments and the private sector. But these arrangements are more relevant for projects that have significant returns. Some highway construction in China is a kind of BOT – the private sector can build and operate it, and then later transfer the highway to local governments. We just need to make sure that there are enough incentives for the private sector to get involved.